VIMMERN modern tap in stainless steel helps lower water- and energy-use – so you can lower your bills too. The handspray is practical for cleaning veggies and the quality is guaranteed to outlast many years of washing and rinsing.

The faucet insert has hard, durable ceramic discs that can handle the high friction that occurs when you change the temperature of the water.

The faucet functions two ways, so you can switch between a concentrated stream and hand shower just by pushing the buttons on the handle.

The handle holder is magnetic making it very easy to detach and attach the hand spray with only one hand. Washing and rinsing becomes very flexible and convenient.

Equipped with check valve to prevent back flow.

If you are uncertain about the installation, contact a professional. The installation shall be made in accordance with valid local building and plumbing regulations.

A tool is included that makes it easy to install the faucet in place.

Spare parts are available to prolong the life of your product. For more information, contact IKEA Customer Services at your IKEA store or IKEA.com.

3.1(46)
Sprayer head never worked properlyLauren T.As others have said, the product is attractive and the regular flow works fine, but the sprayer function to switch between the two has never worked properly. Would love to get a replacement piece to fix the issue.2
The best faucet. It isLOURDESThe best faucet. It is flexible to move while doing the dishes.5
Spray head uselessGail R.Sprayer head never worked right. Tried various things to clear it out but couldn't find problem. It just blocks most of the water. Water pressure is great so that isn't it.2
Nice faucet... until spray head stops workingJon T.We've enjoyed the faucet for a few years, but last year it stopped switching from spray to regular flow... it's stuck somewhere between spray/jet. I've tried taking it apart and cleaning it up, but no luck. However, we really like the spring and the handle - so we've kept it around. I've checked around the site, but no luck finding what I think is part 192551.2
Stuck on "spray"Angela P.After about a year of use, the button to switch from a regular stream to a spray got stuck so it must always be used as a spray. The faucet looks nice but malfunctioning so quickly was certainly disappointing.2
I selected this faucet becauseVictoriaI selected this faucet because I thought it would be flexible but that inner core that allows it to stretch doesn’t stretch very far.3
How on Earth doesn"t IKEA make an adaptor for this!?CHENOA S.This faucet has the most infuriatingly difficult thread-size to match... I THINK it's 13/16 x 16 but there is not a single seller that sells an adaptor to a reasonable sized thread, so basically I have to pick between "form" and function... I used to really enjoy the look but damned now if I don't hate this faucet!1
Faucet love itDebbieWell made and easy to use with fantastic water pressure! Highly recommend!5
Excellent flow!Ralph S.Perfect addition to our remodeled IKEA kitchen!5
Sprayer stuck againSpaddyThe handheld sprayer is stuck again I have taken it apart several times I want to know how to get a replacement cartridge?1
Spray button doesn"t workAllTheOtherNamesAreUsedThis faucet looks good and provides a decent flow even though our house has fairly low water pressure. However, after just a few days the buttons don't work - it provides a stream but no spray. Removing it would be an ordeal but apparently it's not possible to get replacement parts and that's a significant disadvantage. I wouldn't buy this again.2
Constant DrippingSasha567After about a year, this thing drips. There are no instructions or part number to get a replacement cartridge for this and the Ikea website is a waste of time.1
POOR WATER PRESSURE2017RehabI rehabbed my kitchen in October and have had this faucet since then. I picked it out b/c it was on the cover of the IKEA magazine and really wanted it. Initially, I thought they just needed to adjust the plumbing but in fact sediment gets trapped and blocks the flow. I have taken it apart several times but can only remove so much. Vey disappointed it is too late for a refund.1
Broken; water everywherePaul MInstalled in May. It's now October. The whole top part, just above the handle, detached. It just sits in a hole, with nothing holding it in. The top, the whole spout, shot up, shooting water straight up, all over the place. Put the spout back in the hole. Same result.1
TerribleCrow1962Every time you turn the water on or off the knob falls off. Does not sit pointed into the middle of the sink. So when you wash vegetables or chicken the water goes all over the back of the sink. Terrible design.1
This is part of kitchen renovation by IKEA. HorribAogozalekHorrible experience, either IKEA or contractor retained by IKEA dropped the ball numerous times. We went through IKEA figuring they would handle all issues etc. so many issues and so much finger pointing, we do not know who is responsible for what. We have suffered. 10 day job turning into infinity. Can not use anything in kitchen for last four weeks. No end in sight!1
Featured on Instagram
Check it out! Some of our #ikeausa followers tagged #
Skip visual ugc carousel content

Saving water every time you turn on the faucet

All of our kitchen faucets save up to 40% water. They have a simple water-saving device that reduces the water flow (but without you noticing any difference). 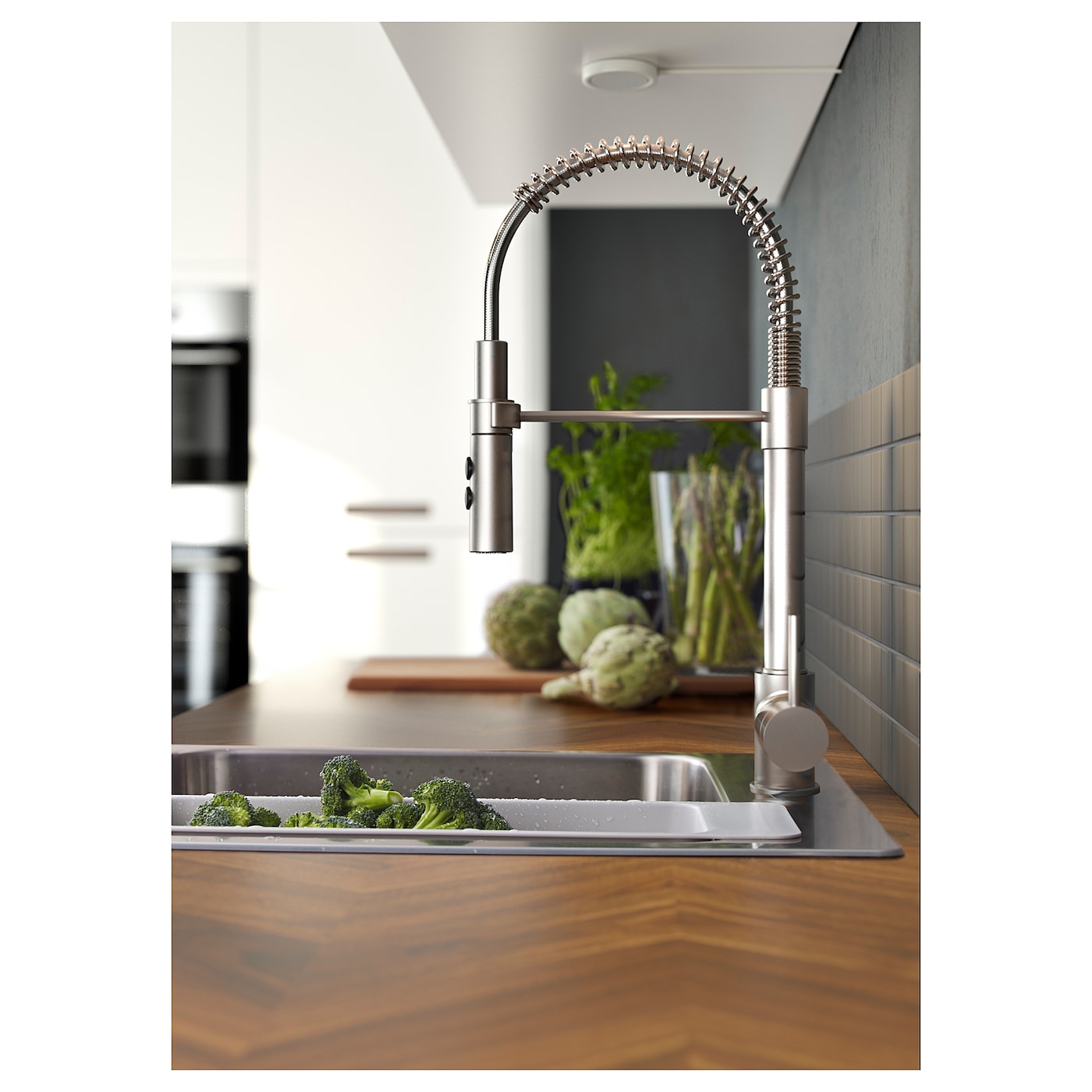 Saving water at every step

Every time you rinse salad, fill a kettle or wash dishes, you're helping with something essential—saving water. How? Thanks to the small aerator in every IKEA kitchen faucet that reduces water flow while maintaining pressure. We didn't invent aerators, but think they are an important example of how we can work together to save water for everyone's benefit.

Four years ago, we started a project to improve our faucets and knew we needed more expertize. That's when we hired Antony Smith, an engineer from England who has worked with faucets for more than a decade. Now he lives in Sweden and is part of a small team that develops faucets and showers for IKEA. Like every new employee, Antony read founder Ingvar Kamprad's Testament of a Furniture Dealer. In it, Ingvar writes 'wasting resources is a mortal sin at IKEA.' This helped Antony understand how much we care about water and how his job is just one step in our larger approach to sustainability.

"When I got to IKEA, I realized we practice what we preach about sustainability," Antony says. "It's a refreshing experience, but it makes our job really difficult because we genuinely have to deliver on sustainability with each product." So why is conserving water so important? Because water is one of our planet's most precious resources. Earth may be covered in a lot of water, but very little of it is drinkable and even less is accessible. No organism can survive without it, and no new water is created. It's constantly recycled, but our freshwater supply is overused; not evenly distributed; and impacted by pollution, contamination and climate change.

IKEA values the quality and quantity of water so much that we are committed to being water positive by 2020. One aspect is finding simple ways for people to conserve water. Aerators are a step we took long before our water commitment, but Antony and his team are working hard on new water saving faucets using sensors or spray technology. Behind the scenes, there's more to our commitment than what we develop for kitchens. Our initiative also includes exploring ways to improve water efficiency across the whole product process, whether it’s at our suppliers, distribution centers or stores. It can mean providing factory workers and their families with fresh drinking water, ensuring all factory water is cleaned before release, reducing water usage in textile production or using rainwater to flush toilets in stores. "We make things hard on ourselves for good reasons, Antony says."

See why the aerator in your kitchen faucet is a small part of our bigger effort to conserve water? "Some people who live where you can just turn on your faucet and get water may not really think about saving water; it's taken for granted," Antony says. But he and his team think about water at every step. It's part of creating a positive impact on people and the planet. We think every water-saving action adds up and thank you for helping with your kitchen mixer faucet!

Brass is a mixture of copper and zinc and the amounts vary depending on the desired properties. Copper is usually the main material and the more zinc you add results in the brass being harder and stronger, but also results in it being more difficult to shape and less resistant to rust. Brass can be recycled as brass but never into its original metals. At IKEA we use brass for things like knobs, handles, frames and taps.