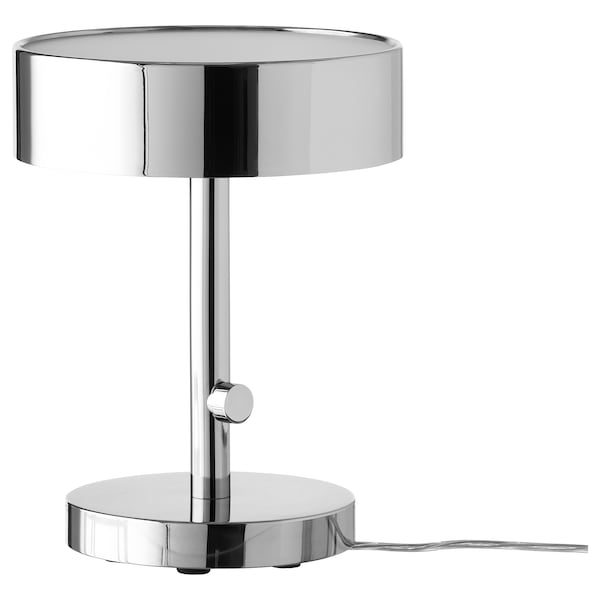 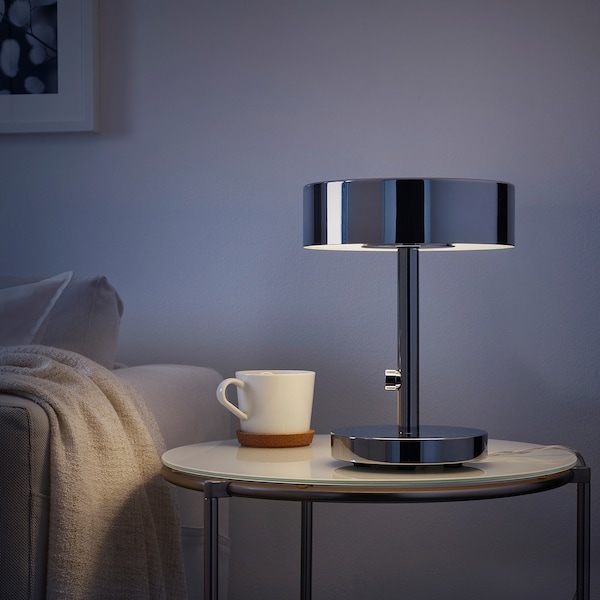 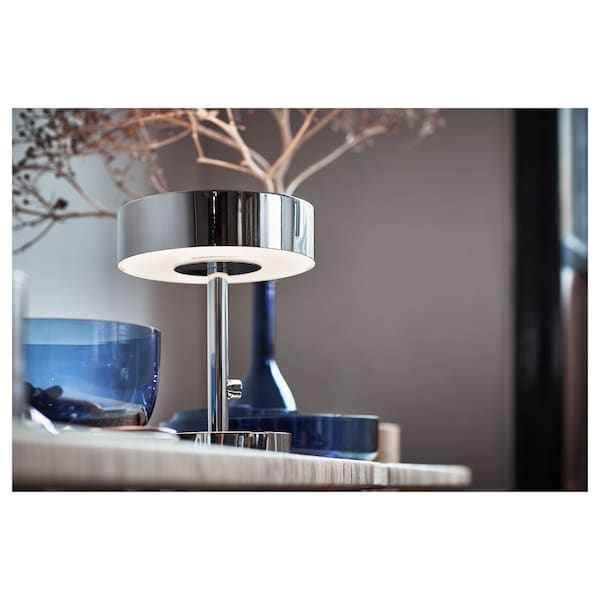 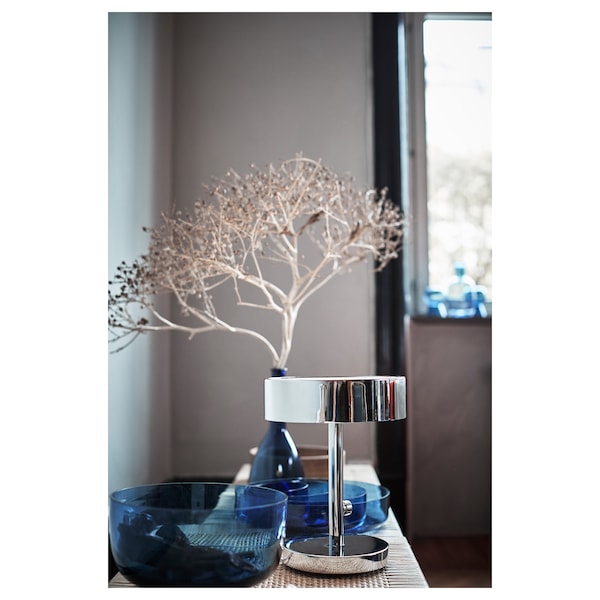 The shiny surface makes the lamp look like a jewel. A jewel that spreads a pleasant light both up and down without dazzling. And the dimmer switch allows you to create the mood you want for the moment.

Integrated dimmer, to give general light or mood light.Provides a soft and dimmed light since the lampshade has frosted glass on both the top and bottom side.The felt pads underneath protect the surface below against scratches.The weight in the lamp base provides stability.Helps lower your electric bill because dimming the lights saves energy. LED light bulb included.Designer

3.3(10)
Nice and practicalMARIAI like how the amount of lighting can be adjusted5
doesn’t workDiyarAI got the the light bulb for the lamp however the light keeps flickering when it’s in turning off and the brightness isn’t adjustable either. It looks very nice, sleek, and it would’ve been very nice to adjust the brightness and have a great quality working lamp in its best condition however I guess that’s not the case here.2
Chrome lampJimbo552Super high quality. Looks nice5
Bad reviews are misleading!CarmenMirandaI purchased this lamp a month or so ago and am very very very Happy with it! It's made better than most lamps from IKEA, it's heavy, has an integrated dimmer switch and gives wonderful soft light. What more could you want from a MCM lamp, oh yes a great price! PS I purchased in the store and it had a bulb didn't realize it was a removable one.5
Great lamp, amazing for pricePIT MinimalistI saw the low rating and had to defend this little guy! I love this lamp and especially that the knob is on the side of the lamp itself. I hate when the switch hangs way down below the tabletop. Anyway this dude is heavy, which I appreciate since some IKEA lamps are adorable but very easy to slide around the tabletop or knock over. The dimming is great and the switch makes a satisfying high quality click. Yes the bulb comes separately but if you are looking at the box in store it says that. I do see what some reviewers mean about it being bright from the top - this does not bother me at all though I do tend to use it dimmed a bit. Great purchase!!5
Total Wastedunk25Just bought two of these lamps from the Ikea store in Bolingbrook this weekend. We were very careful to make sure we bought the exact right light bulbs for them as well. Got home and the lamps refused to work, no matter what we did. Total waste of money. If I wanted an attractive mid-century looking lamp, we should have gone to West Elm or even Herman Miller. Even if they're WAY more expensive, at least I wouldn't be throwing my money away for something that doesn't work.1
Sleek midcentury modern lampshish01I am an IKEA coworker. I have a chrome midcentury modern floorlamp and knew this one would compliment it really nicely, and it does! The lightbulb does need to be purchased separately. The light comes through both the top and the bottom. Some of the reviews speak to the visibility of the bulb at the top. It didn't bother me, but I would recommend checking the floor model out in a store to make sure you are happy with the look. I really like the soft lighting and am happy with the addition to my family room.4
Not even a lamp. It"s a giant paperweight.robchasThere's no bulb for these despite it saying they included them making these two lamps nothing more than gigantic chrome paperweights. I bought two of these at the Atlanta Ikea store and neither of them came with a bulb even though it said they were included. Why even bother making this bulb removable? It's an LED. Ikea to the rescue making something as simple as a table lamp WAY more complicated than it needs to be. This lamp makes me reconsider why I put up with the Ikea experience at all. Long lines, stupid problems like this and their price advantage for build it yourself is no longer that much of an advantage at all. I'll be returning these lamps to the store and getting my money back and shopping at a reputable company from now on. Bye Ikea.1
Nice but the bulbs are discontinued so well?!?EVABOSTONWe bought the lamp on 12/31/17. They were no bulbs at the time in the store LED bulb GX53 600 lumen, dimmable so we decided to buy online or buy it another time. BUT SURPRISE, you can't buy online and the bulb is discontinued. The only way to light up this lamp is to go a store in an other state, for example TENNESSEE (I live in Mass!) where they have hundreds. Called customer service, IKEA doesn't send out of state.. so either I buy myself a plane ticket either I have to return the lamp. WOW! DON'T BUY!1
Beautiful lamp - beware of one thingCSTXThis lamp is beautiful and very solid feeling. Truly a stunner and a great value. However, you'll notice that there are no pictures of it from above with the light on....that's because the odd LED bulb shows through very clearly and is too bright on the eyes, even with the frosted glass and on the dimmest setting. I originally bought these for use on end tables by the sofa but am moving them to the office and placing them above eye level, as the light from below is nice and diffused.4
Skip listing

"When I designed the lamps for the STOCKHOLM 2017 collection, I wanted them to feel like jewelry. I wanted to use the shiny metal to reflect the room and make the lamps feel present, even when not lit. The biggest advantage is the high quality in every detail, from the lamp’s entire monochrome mirror finish to the dimmer function and the frosted glass panels that spread light both upwards and downwards, warm and comfortable."