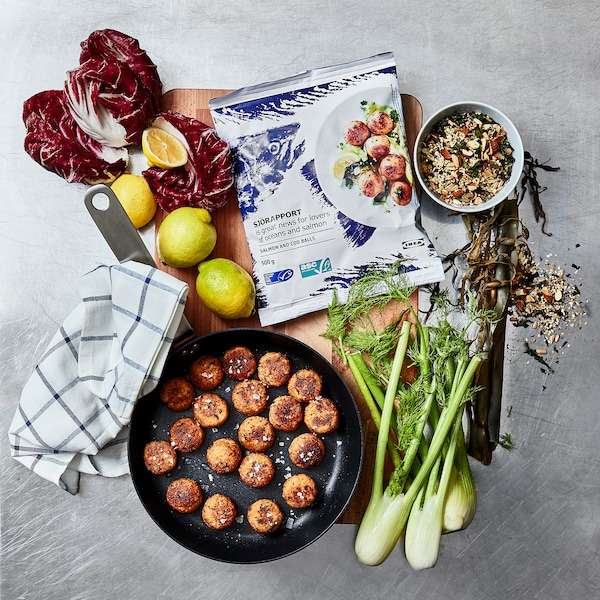 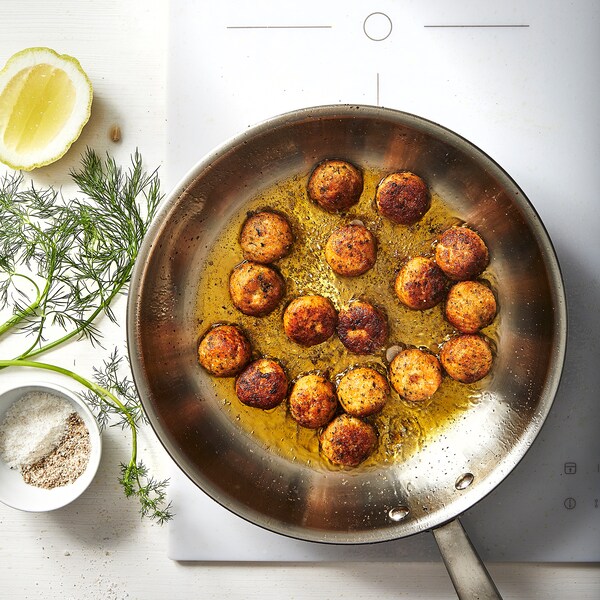 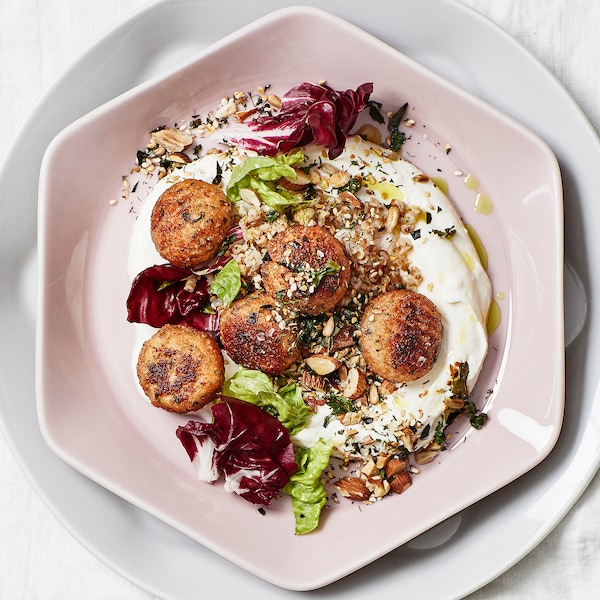 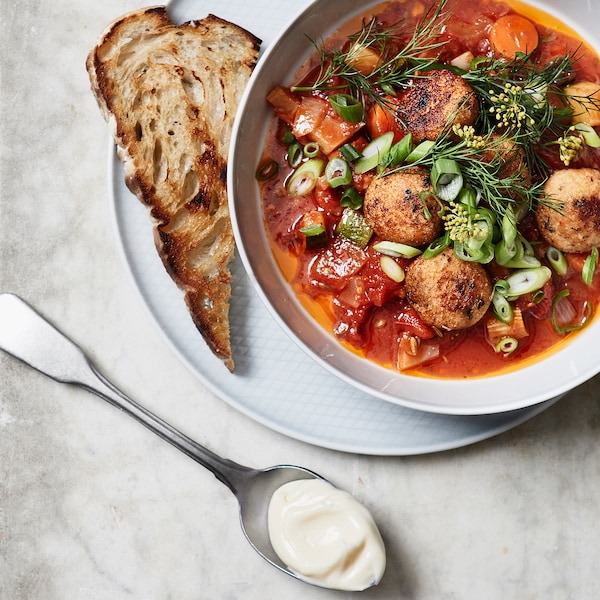 4.3 63 Reviews
We love salmon. Have a go at one of our reasons: juicy fish balls with flavors from the sea and a texture from heaven. The added cod makes them even tastier. Read More

These salmon and cod balls suit many dishes and are great with various condiments. They taste delicious with things like tomato and spinach ragout or with a slightly buttery lemon and dill sauce.

A good source of fiber, protein, vitamins and nutrients, but low in cholesterol.

Easily portioned. Prepare the amount needed, leave the rest in the freezer.

This product has met the ASC's global standard for responsibly farmed seafood.

This seafood has met the MSC's global standard for sustainability.

Create a buffet with meatballs, veggie balls, chicken meatballs and salmon balls. One for every taste. 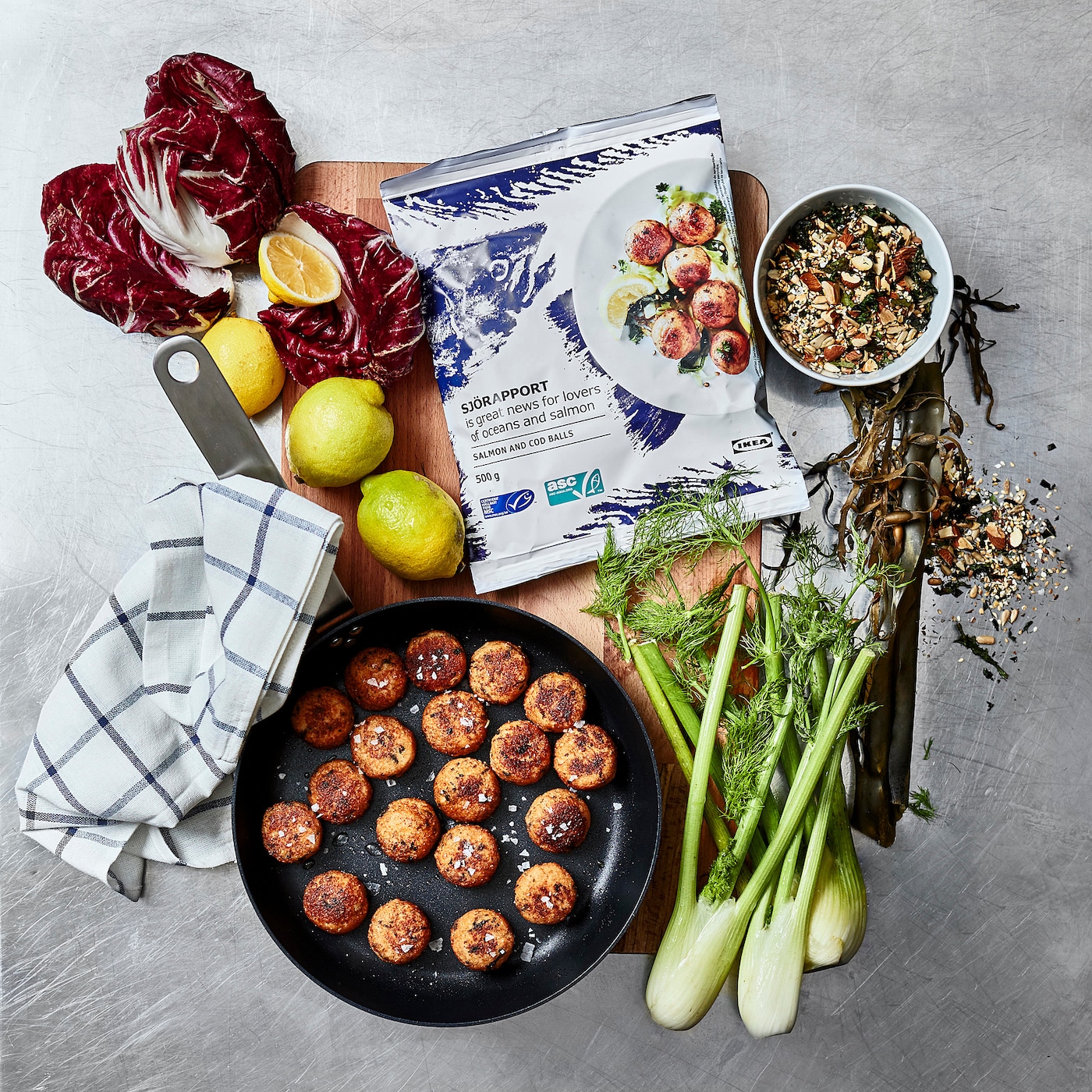 A buffet of good
Today’s recipe for the classic IKEA meatball rolled out from our test kitchen already in 1985. Since then, the IKEA meatball has become an icon on plates around the world and a proud example of traditional Swedish cooking. But, when we asked customers on three different continents what food they prefer, we realized we had to extend our meatball family with tasty alternatives.
“Not everyone eats beef or pork, so we went into the kitchen to create new recipes,” says David Johansson, chef and product developer at IKEA Food Services. First came the chicken ball – an alternative for those who like meat, but not necessarily red meat. “Like all our meatballs it’s just as good hot as cold, and we’ve seasoned it gently so it fits different cuisines and local flavors.”

By hand, with teaspoons

When the salmon has been filleted, there’s usually meat left on the bones. “It tastes really good. And there’s surprisingly a lot of it,” says David. To get the meat off the bones, the team tried to use compressed air, but then realized that the best way to do it was by using teaspoons. David tells that it’s a technique that has been used in traditional Swedish fish restaurants for ages. “It’s time-consuming, but a logical way to take care of the some of the best parts of the fish. And by using spoons instead of knives, we don’t risk getting small pieces of bones with the meat.”

Certified and wild-caught from cold seas

The salmon and cod balls contain farmed ASC-certified salmon from the rugged Norwegian coastline. Wild-caught MSC-certified cod is added to balance the flavor and get the right texture. The salmon and cod balls have a carbon footprint that is roughly seven times lower than classic IKEA meatballs. “Offering food that comes from responsibly managed sources and impacts the world as little as possible makes sense – it’s a good way to be kind to our planet,” finishes David.

Sustainability was also a reason to create new options. “With the veggie ball we wanted to offer something as appreciated as the classic meatball, but plant-based and with less environmental impact,” explains David. The veggie ball has a carbon footprint that is 20 times lower than the classic meatball, the chicken ball has a carbon footprint that is four times lower. With more alternatives you can not only choose between more favorites, you can also decide how big environmental impact your meal should have.

New flavors in a classic shape

The latest, but not the last, member of the IKEA meatball family is the salmon and cod ball. It contains pieces of salmon that are too small to be used as whole fillets. “And since it’s very tasty meat, we thought, why not make delicious fish balls of it instead?” says David. He also tells about a coming addition to the family. It will be made of plant-based proteins, but taste and look like meat. That’s good news for meat lovers who want to eat more sustainably from time to time. “A lot has happened since 1985. Now, there are eatable IKEA icons for more of the many people. No matter if you’re flexitarian, vegan, have dietary needs or cultural preferences.”
More from the SJÖRAPPORT series
More Fish & seafood