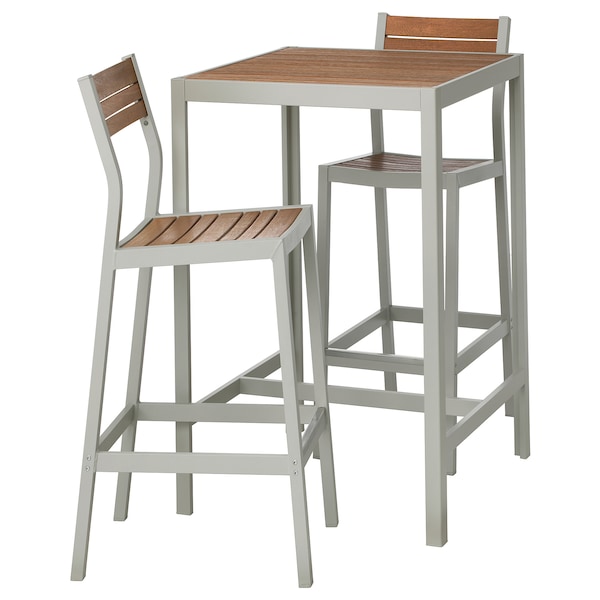 The table top in wood is made from eucalyptus slats, all with grain variations and natural color shifts, that give the table a warm and natural look.You can choose between tabletops in different materials, depending on what suits you and your patio ‒ and if you prefer a maintenance-free material like aluminum or the warmth of durable eucalyptus.The frame is made of rust-proof aluminum which makes it sturdy, lightweight, and maintenance free.Easy to keep clean – just wipe with a damp cloth.For added durability and so you can enjoy the natural expression of the wood, the furniture has been pre-treated with several layers of semi-transparent wood stain.Can be used with FRÖSÖN/DUVHOLMEN chair pad 13¾".Only recommended for outdoor use.Designer

Sometimes things don’t go the way we expect when we create our products. Like with SJÄLLAND outdoor furniture. When we were almost ready with the development and thought we had straightened out all the question marks, our own designer didn’t manage to assemble one of the products the right way. Yes, we’re blushing a bit, but this blunder turned out to be a good thing.  Read More
When we want to move life to the deck or the balcony we shouldn’t have to worry about refreshing the outdoor furniture too much before we can relax and go ah… And it ought to be simple to fit the furniture back into crammed garages or under covers when the warm season is over. To get the care-free chairs and tables that most of us appreciate, we created SJÄLLAND. But, when David Wahl, the designer, started working with the collection, he didn’t realize that he and the development team were in for a hurdle-race of obstacles.

One of the first things David put in the design was an armrest on the chairs. It’s made of aluminum and bent two times to create an angle that makes it easier to sit down and get up, especially around a table. It’s also twisted to make the chair stackable. The bends and twists added function, but also created some headaches for David’s colleague, Phuong Nguyen Thanh. Phuong was the technician on the team and his task was to make sure that the design and the materials work well together. "When I first saw David’s design I said to myself ‘Oh no, that’s impossible! There isn’t a machine that can bend aluminum like that,’" remembers Phuong.

Problem with curves straightened out

But, the team also felt the curves and twists were worth fighting for. And many people think armrests are really comfortable – so they decided to push on with the design anyway. "Our suppliers adjusted the machines they had to get the armrest just right. The first prototype turned out quite ugly to be honest, but nearly 30 trials later we managed to nail it," laughs David.

To save time and get SJÄLLAND ready for the outdoor season, it made sense for the team to create the chair first and have it influence the rest of the collection – instead of designing everything simultaneously. When it was time to do the bar stool, David naturally figured; Why not just make the legs longer than on the regular chair – that should work. But, it didn’t. "The first prototype was easy to sit down in, but then you were stuck in it. It was maybe one of the worst designs I’ve ever made, but it also made me realize that a bar stool works best without armrests," says David.

When the team finally had most things in place, David made one more discovery. "It’s a bit embarrassing, but I assembled the table incorrectly," he says. "I took a picture of it, sent it to the team and said ‘Hey, I found a way to put it together the wrong way!’ I think they assumed that I had tested the construction, but I just wanted to see what it looked like with all pieces in place. The table is not hard to assemble, my mind must have been elsewhere, and to my defence I didn’t have the assembly instructions at hand," confesses David.

The good part about the problems the team faced, is that they all led to improvements. The chair became stackable, the bar stool functional and the assembly instructions super-clear – so no one needs to experience what David did. "It’s actually problems like this that we like. They make us better, and in the case of SJÄLLAND, they also make outdoor life easier", says David.
Read less

Rust-proof, weather-resistant and easy-care aluminum combined with durable hardwood eucalyptus. For maximum protection the wood is pre-treated with wood stain. By re-staining the wood now and then you can enjoy it for many years to come.