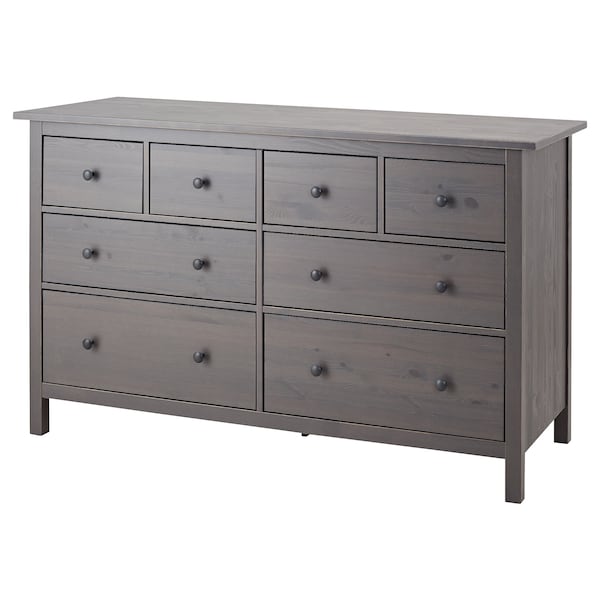 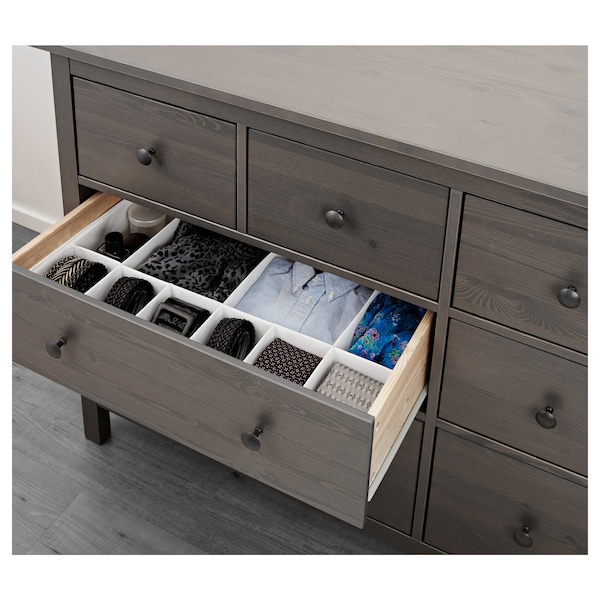 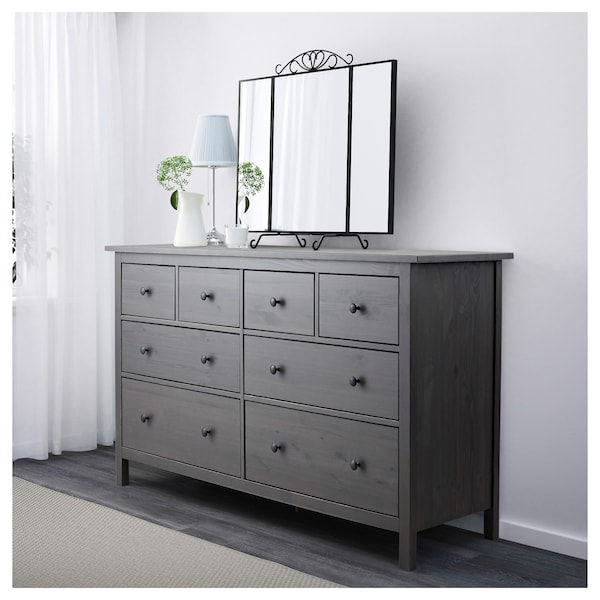 Lasting beauty with wood from more sustainable sources. A traditional look in a warm finish combined with modern functionality like quiet, smooth-running drawers. Psst! Remember to anchor it to a wall.

Made of solid wood, which is a durable and warm natural material.

Of course your home should be a safe place for the entire family. That’s why hardware is included so that you can attach the chest of drawers to the wall.

A wide chest of drawers gives you plenty of storage space as well as room for lamps or other items you want to display on top.

If you want to organize inside, you can complement with SVIRA box, set of 3.

Coordinates with other furniture in the HEMNES series.

WARNING! Prevent tip-over injury or death. Furniture with included restraints must be secured to the wall according to the product’s assembly instructions.

Different wall materials require different types of fasteners. Use fasteners suitable for the walls in your home.

4.5(1160)
Great piece!DanielleLove this piece in my foyer as shoe storage. The drawers are super smooth on the tracks. We switched out the knobs for an easy upgrade.5
Sagging bottom middle frontJenniferGreat color but maybe need a leg to help support front middle section because it sags.2
CrustyRobertCrusty5
Happy with my dresserwendy l.beautiful and has a nice look, I bought the glass cover as well it looks dreamy :-)5
i love my new furnitureURSULAi love my new furniture5
Good functionality and looks nice.SUSANGood functionality and looks nice. Quality of wood is very soft. Expect some nicks in assembly. We purchased the glass top to protect the most used surface.4
Beautiful and Spacious!TaraI love the space it provides. It’s much bigger than it appears, sits taller and I love it. My only complaint is that it doesn’t have soft close drawers like some of the other collections. But, would definitely buy again!4
Beautiful dresser; not so beautiful assemblyEmily E.My boyfriend and I purchased this dresser in the dark gray color. The dresser itself is lovely, but the assembly process was pretty frustrating and very time consuming. I understand that pretty much all IKEA furniture requires some assembly, but this piece was quite difficult and tedious to assemble. The instructions are not super clear and a lot of the screw pieces look very similar, so it was difficult to tell which pieces we were supposed to be using at times. I’m also very disappointed that the regular white color has been discontinued, leaving us with only the white stain option. It is not the same! I originally wanted to get the regular white one as it would match the taller Hemnes dresser I already have, but we settled with gray since the white stain was out of stock and the regular white had been discontinued.4
InstructionsCody R.Dresser is fine but instructions are horrible2
Love!Alexus C.I love this dresser! Very affordable and sturdy!!! It did take me and my husband a good bit of time to put it together. (8hours) But it’s held up very well. No chips, barely any scratches. The instructions weren’t hard to follow for us, just had to make sure we were really paying attention. I would highly highly recommend5
Seems like good quality, directions not so muchLyndsey C.My only real complaint are with the assembly instructions, which it seems like everyone else agrees. Nothing is labeled like other furniture that I’ve assembled. You’re stuck guessing which pieces are what. The pieces are all intact and it seems like a solid piece of furniture. I do like that it is solid wood. I haven’t seen this in store, not a fan of the ikea stores personally. I bought this off of recommendations of others. I purchased the white color, which isn’t a solid-glossy white if that’s what you’re looking for.4
DresserJenniferI love this dresser!!! There was a crack in one drawer on the front panel and IKEA took care of it and were terrific!5
Difficult to assemble!Alicia C.Almost every single item needing to be assembled does not have a label. You have to look at the pictures and try to guess which piece goes next. The manual has labels but the pieces do not. Speaking from someone who works with tools and blueprints all day long for a living this is the worst assembly/purchase ever made. Also appears to be missing some screws which we'll need replaced asap. The quality appearance in store looks way better then here in my home.2
I expected much better....Samantha L.We just recently bought the black brown 8 dwr dresser and we are disappointed in the quality of the build. I've owned many Ikea furniture pieces, including this same dresser, assembled them myself and never had any issues. But we purchased a handful of pieces recently and all seem to be uneven, rushed, and just lower quality than I am used to from Ikea. The dresser was difficult to assemble because several of the dowel holes were not drilled properly and a few didn't line up like they should have. Also, some of the screws keep falling out, despite being tightened as much as possible, so far I've had 3 fall out of random places and I've found them on the floor or inside the drawers. Two of the drawers don't even slide the drag on the wood, and no amount of tightening/adjustment/starting from scratch has made any difference.3
Color wrongMitchell R.I bought the black-brown which turned out to be black (no hint of brown at all) then returned it for gray, which turned out to be a black-brown with a hint of gray. It looks nice, but nothing like the color online.2
Horrible to Put TogetherjenniferThis product was incredibly complicated to put together. It was not advertised to be this hard. Once together it does not seem very sturdy.1
Great dresser better than IFrederickGreat dresser better than I expected5
Lovely Addition to Our HomeYVONNEI already had one I had bought a few years back, but it was in dark brown (and I've been slowly moving my furniture to grey). It took a while to put together (I actually spaced out the days so that I didn't get overwhelmed), but it was mostly fairly easy. The only thing I wish-- for ALL IKEA wooden furniture-- is that they had more color options (or even just an unstained option we could stain ourselves). I wish this grey was a little lighter, but I still love it.5
AwesomeJocelynI have been purchasing from the hemnes line for over 20 years and never had issues with it5
Assembly was difficult!REVELYNSorry but it was way too overwhelming to assemble this. From someone who is not good at all with tools…not a good idea. Had to return back into pieces.1
Skip listing
Skip listing
Story