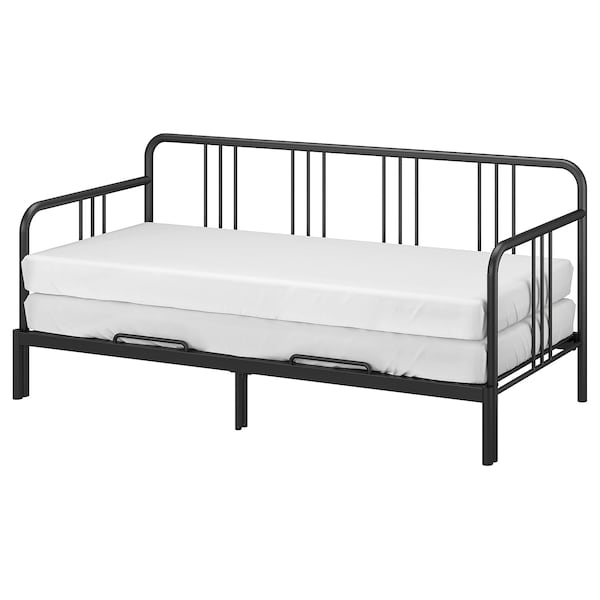 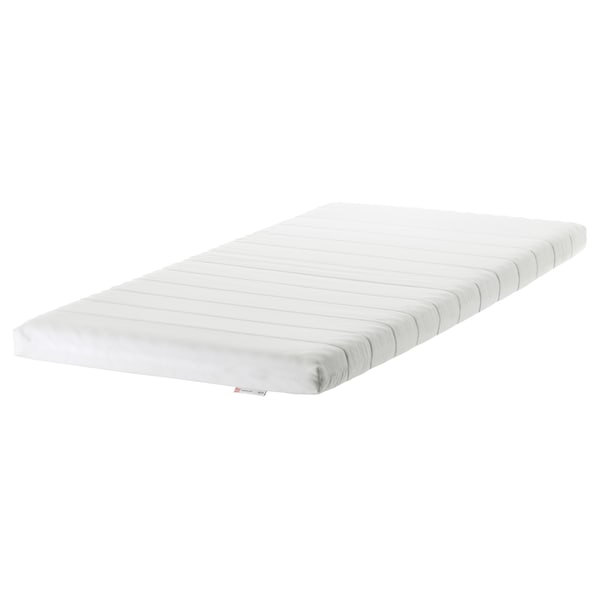 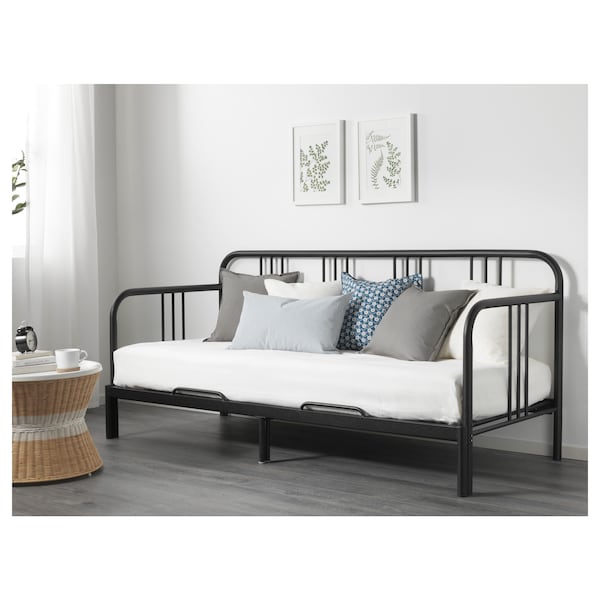 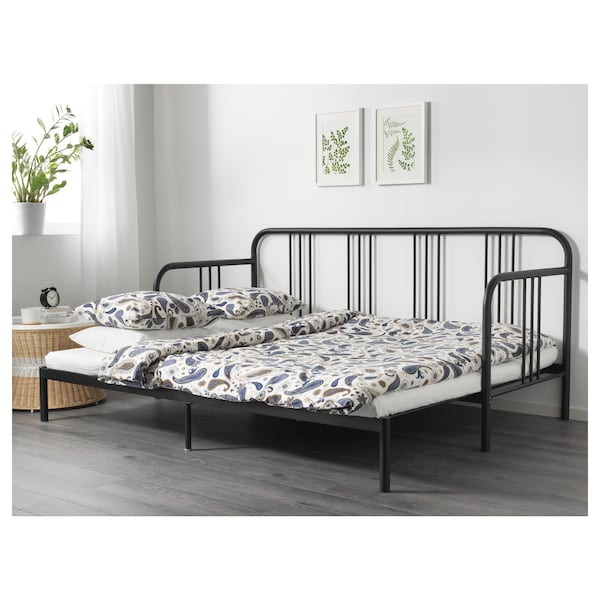 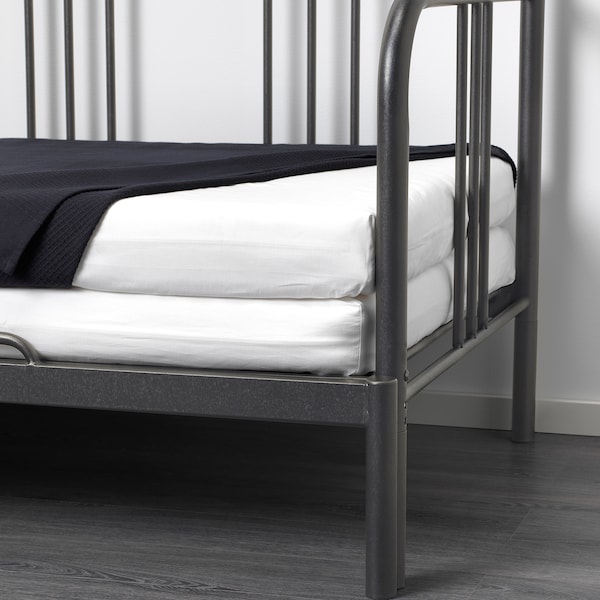 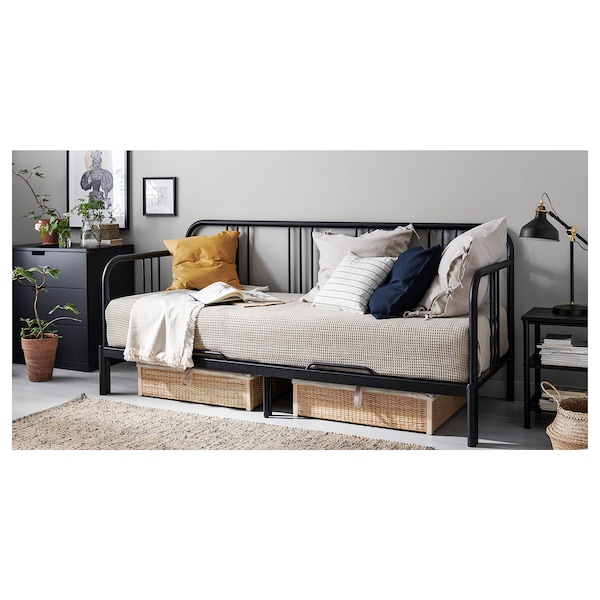 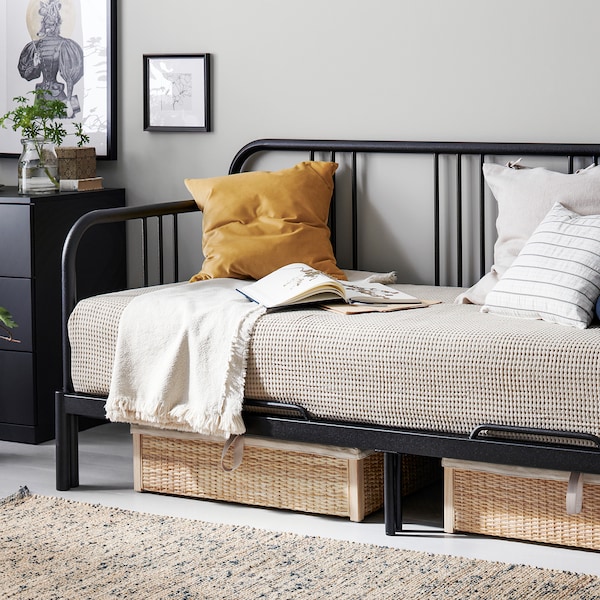 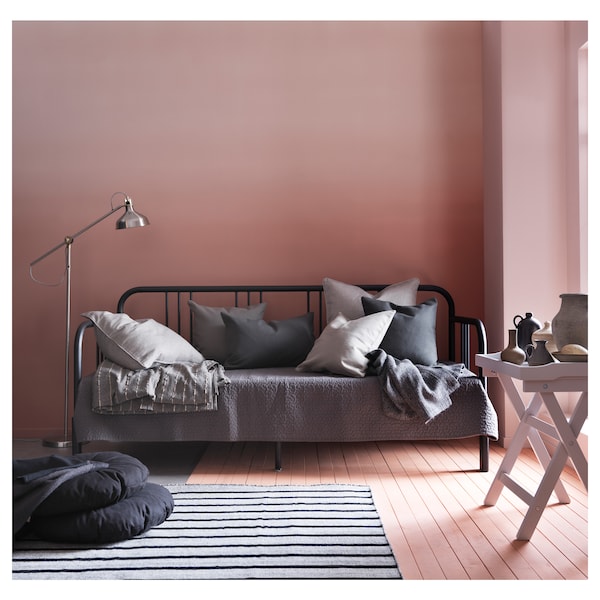 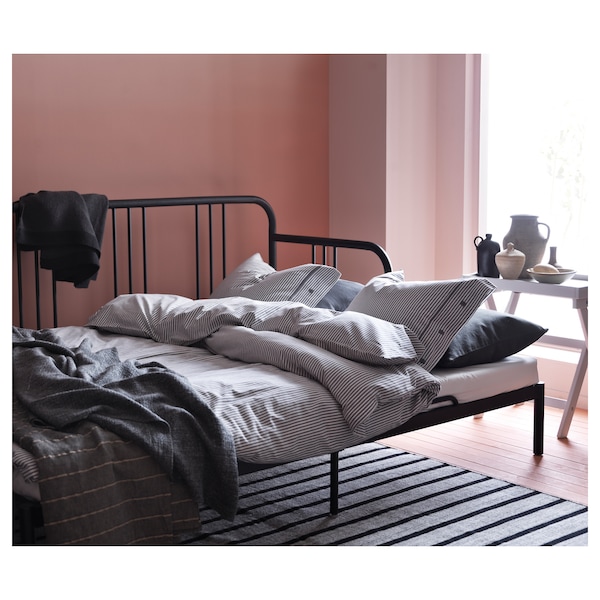 Plenty of room for your guests or for long, lazy days. Use the daybed as a freestanding chaise, a single bed or lift and pull out the extra bed base to create a double bed.

A classic powder coated steel frame which is easy to maintain. The timeless design means that you decide what style you want - minimalistic or colorful with lots of patterns.With some soft, fluffy pillows as back support, you easily transform this day bed into a comfortable sofa or chaise.Transform your sofa into a single bed in no time and maximize the use of floor space. Perfect for a teenager's bedroom or where you don't have a lot of space.With this daybed you quickly and easily create space for overnight guests. Just lift and pull out the bed base and you get a double bed in no time.If you stuff duvets and pillows in large cushion covers, you get both storage and comfortable back support during the day. Both smart and practical.Get all-over support and comfort with a resilient foam mattress.The daybed must be combined with two twin mattresses. They are placed on top of each other when you use the daybed as a single bed, and next to each other when you use it as a double bed.To create a double bed – lift and pull out the extra bed base.Bed linen sold separately.Two MINNESUND foam mattresses included.Slatted bed base is included.Create extra storage space under the bed with RÖMSKOG underbed storage box.Designer

4.2(5)
Perfect bed for a growing childPaul88I bought this as a transition bed from a toddler to something bigger. It’s been a perfect transition for my daughter and she loves the ability to make it bigger.5
goose202Works well in our guest room4
PerfectOc22Perfect.. Nice looking bed frame I assembled it myself I took it step-by-step end it was easy to assemble I’m happy with this purchase5
Never, ever take this bed apartcbtkAlthough somewhat tricky to put together initially, I managed to do it (by myself). It is a pretty bed and fairly comfortable; I used both mattresses one on top of the other because my apartment was small. However, after owning it for two years, I moved. but not too bad. I had to take it apart because it's too large and far too heavy to try to move it assembled. I followed the disassembly instructions that I downloaded off the internet. That was slow and awkward, and figuring out how to transport the 70 metal tubes that take the place of slats was a bit challenging. However, when I started to reassemble it, again according to the instructions, there was no way I could successfully get the longer tubes into place. I ended up pretty much reducing the bed back down to the parts it came in initially, and the whole experience took many hours to work through by trial and error. So, if you're buying it to leave it in one spot forever, it's okay. If you're ever going to move, just take the thing entirely apart, right down to the tiniest of parts, having saved all the original packing materials, because you'll save time and energy in the long run.2
So far so goodDiego2018Bought this bed back in August because my boyfriend and I liked the option of having a big bed and5
It works fineKelly2018It did take a bit to assembly but the instructions were fairly clear. The mattress is fairly hard. I don’t find the mattress comfortable but my daughter thinks its fine.4
Skip listing 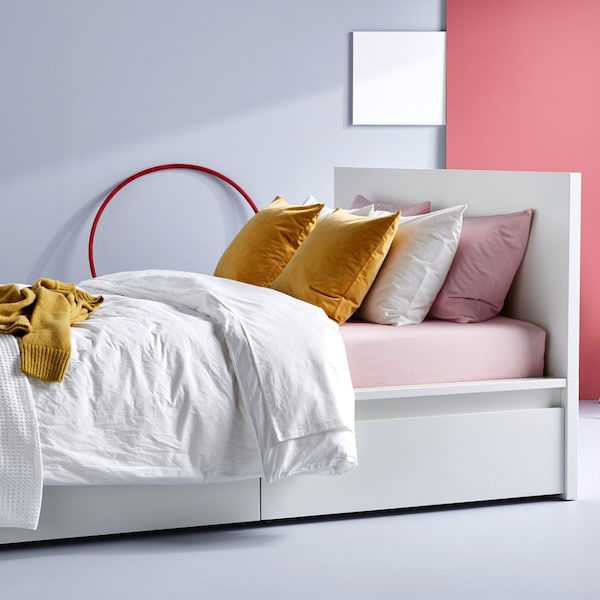 Sofa by day, bed by night

Want to make the most of the space at home? FYRESDAL daybed works as a sofa by day and quickly turns it into a double bed by night when the bed base is pulled out. And underneath, there’s plenty of space for storage boxes for extra bed linen.