Now it's really easy for anyone to use smart lighting. With the wireless dimmer you can control your light sources – turn on, turn off and dim so you always have the right light and mood at home.

Use the wireless dimmer to dim, turn on/off up to 10 light sources - all will behave in the same way.

You can dim your lighting wirelessly and easily adapt the lighting based on activity.

3.8(12)
Simple and easy to installVerified BuyerGreat little switch and the magnetic attachment is a great design function5
Smart switchVerified BuyerSmall and neat - I love the way it's magnetic and will stick to fridges, desk lamp bases etc. as well as its own little metal nest.5
Low cost and effectiveVerified BuyerI've used several of these around the house to control lights, fans and other electrical items. So far so good...5
Works wellGPC1634Good and works well, but for an item which is only just over an inch square, in a box about 3x3, why do you need to send it in a box which is 15x15? Filled with scrap card. What a waste!5
Great productNicola EFantastic product as with all the range. Easy to set up with all the rest of the lights/switches. Looks nice and can be stuck on any surface. Love how the switch is magnetic as well so you can remove it from the back and carry it elsewhere.5
Not bad, but not perfectLeopold005I got one of these to control a Tradfri bulb in a bedside lamp, which doesn't support any warmth or colour options, so my preferred remote seemed a bit overkill (and at over twice the price, too). This is a neat, if somewhat pedestrian looking switch, which does the job nicely enough, but it does have a couple of issues. Firstly, accessing the guts of the switch to replace the battery or connect it to the gateway is done via a panel at the back which requires a very tiny screwdriver. Why? I can't see any earthly reason for it, especially since every other remote doesn't. Secondly, despite being magnetic, it doesn't stay put too well unless you use the supplied bracket, which I'm reluctant to use, but feel like I've got little option. Finally, it doesn't feel especially nice to hold and is a bit fiddly to operate one handed, which rather negates the need for it to be removable from its mount in the first place. That said, it does have a pleasing action, with its one touch on-off and hold for dimming, making it very easy to use. It's also quite discreet, so it doesn't stand out as obviously as the bigger remote does. I would love it if Ikea actually made this as a replacement light switch with a permanent fixing, as it would be ideal and would make it a product that no other smart light maker has ever bothered with.3
dont bothertom100000not worth buying. save your money.1
Great little dimmer for the Tradfri rangeDIY NumptyI have no idea what all the negative/low rating reviews are about. I can only imagine these people struggle changing channels on their TV or starting the engine on their cars! Extremely easy (and quick) to pair and set up and thus far have all worked flawlessly.5
Works fine but instructions let it down.Barrie GI bought the dimmer separately from the bulbs. So they are not paired. I got it to work eventually controlling 3 different bulbs. But I had a problem with (a) understanding what to do with the sticky things and finding the pairing button to pair the dimmer to a bulb. There were a set of instructions for fastening it to a wall - not my cup of tea - or sticking it to a smooth surface. I couldn't really understand the instructions for sticking it so I decided to worry about it later.Then I read how to pair it to a bulb. The instructions for that are not with the dimmer, they are with the bulb. And it says, and I abbreviate a bit, hold the switch close to the bulb and press the pairing button for 10 seconds. It is under the rear cover. Well, to cut a long story short, you need to unscrew the rear cover of the dimmer to find the pairing button. I was pleased that I hadn't somehow irreversibly stuck the dimmer to the wall.4
Tricky to set up, but worthwhile and functionalJon_kemp33These are a little tricky to set up. This works for me: Reset your switch and pair it to your hub BEFORE connecting it to any smart devices. Then pair it with the device(s) you want it to connect to, using the Ikea home app as a guide. Ikea are due to upgrade their system soon - with new software that supports existing hardware. Whilst the whole set is quite finniky, and sometimes unreliable. It is unmatched in price.4
Light DimmerAnonymous reviewerA dimmer unit, but without ON-OFF facility switching.1
Remote toggle switch with dimmerSpidercrabThese switches are tricky to setup and get working the way you want. There could be far better online tutorials which would make this easy. Also they are a bit bulky and would better if there was a version that covered traditional UK wall light switches.3 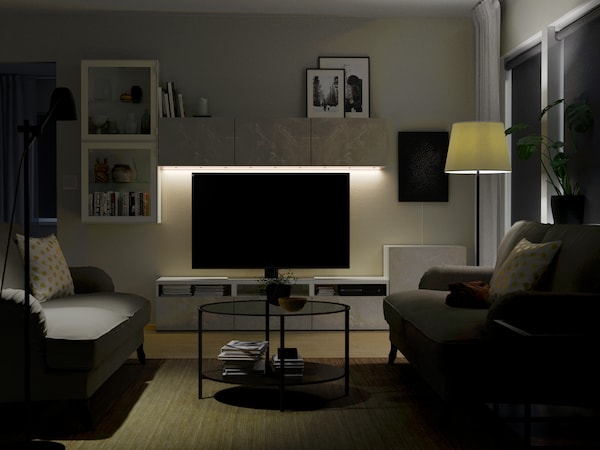 Turn the lights on, turn them off again then change their colour, open your blinds and let the sunlight shine in, or turn up the volume for a party mood. You set the scene.

Our take on plastic

Plastic is a key material for IKEA and remains so going forward. It is strong, durable, lightweight and versatile. It is a main component in a large amount of our products and has a wide variety of applications from surface materials such as paint and foil, to screws and shelf pegs. There is a lot of valid concern regarding how plastic impacts the environment and at IKEA we take this very seriously. As part of our larger circular journey and transition from virgin fossil based material, we are working hard to change all plastic in our home furnishing products to plastic made from recycled and/or renewable raw materials.

Only recycled or renewable plastic

Plastic is most commonly derived from oil and gas, which are non-renewable fossil sources. These sources do not renew themselves and will eventually be depleted. Our ambition is that by 2030, all plastic used in our products will be based on renewable or recycled materials. Renewable plastic is made from materials such as vegetable oil, corn, wheat grain and sugar cane. Recycled plastic allows us to give a second life to non-biodegradable products such as PET bottles that would otherwise end up in landfill. Using recyclable sources also lessens our dependency on oil as a raw material. Currently more than 40% of our plastic products are based on recycled and renewable materials and our aim is to reach 100%. As we add products made from recycled and renewable materials to our offer, we hope to inspire other companies to do the same.

Single-use plastic items pollute ecosystems if not disposed of responsibly. As part of our commitment to people and the planet, all single-use plastic products from the global home furnishing range were phased out in 2020. This includes items such as plates, cups and plastic straws offered in our restaurants, bistros, and cafes. These were replaced by disposables made from 100% renewable sources.

PET and PP, our most commonly used plastics

Polythylene terephthalate (PET) and Polypropylene (PP) are durable, hygienic and shatter-resistant plastics. They absorb very little water and have good chemical resistance. Both PET and PP can be reused and recycled, which reduces waste and gives the product several lives through use and reuse. PET is the most recycled plastic in the world and can be used for many different purposes such as plastic bottles and containers for packaging food and beverages as well as for personal care products, pharmaceuticals and many other consumer products. At IKEA we mainly use recycled PET in boxes, filling material for textiles and kitchen front foil. PET is approved by health-agencies as safe to use for food and beverage. IKEA uses recycled PET that is post-consumer based, which means it is based on collected and sorted PET bottles.

IKEA takes product safety very seriously and all products are tested and comply with the strictest possible laws and safety standards on all IKEA markets. Customers should always feel confident that products bought at IKEA are safe and healthy to use. IKEA wants to minimize or totally refrain from the use of chemicals and substances that can be harmful to people and the environment.

Together, we can do more

Our journey towards only using recycled or renewable plastic will take some time and require new ways of doing things, but we are determined to take responsibility and find new solutions. We want to give our customers the possibility to choose products made from more sustainable materials that can be recycled again one day. Together, we can make a big difference!

ABS plastic is a strong and stable material with a glossy surface – making it perfect for especially used everyday objects like cutlery drawers, kitchen utensils, toothbrush mugs and bathroom hooks. ABS is made from oil-based, non-renewable raw materials, but development is progressing and we are using more and more recycled ABS. It is an important step towards our goal of only using plastic that is recycled or from renewable sources.