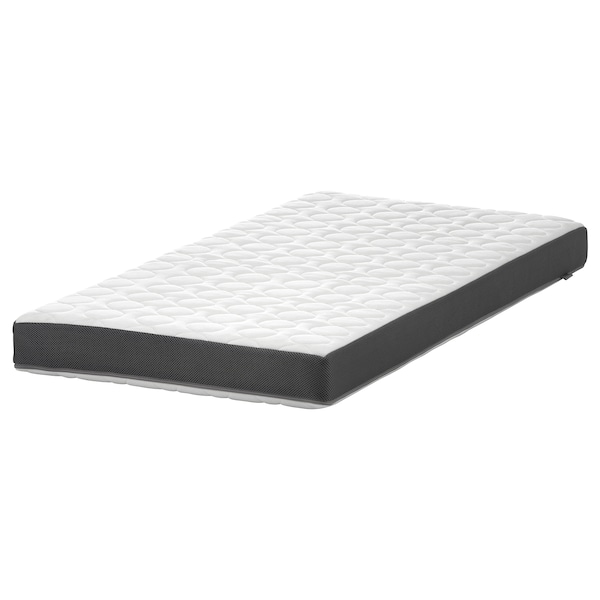 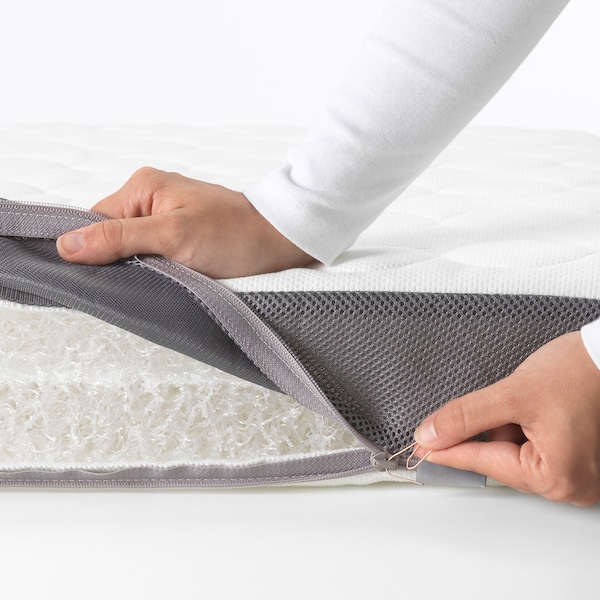 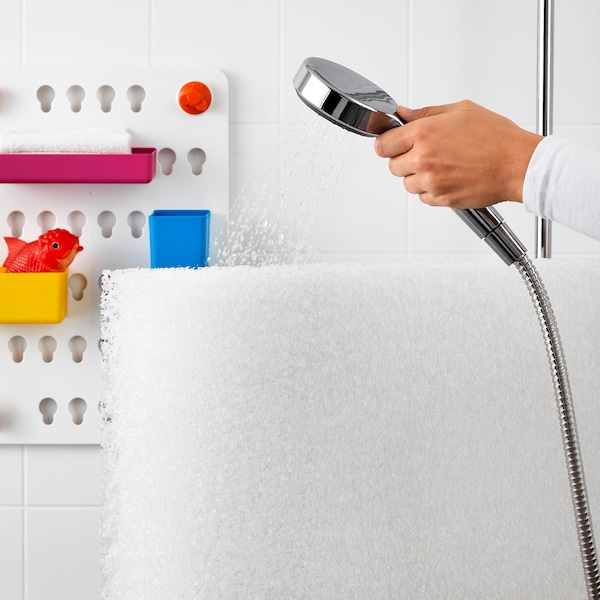 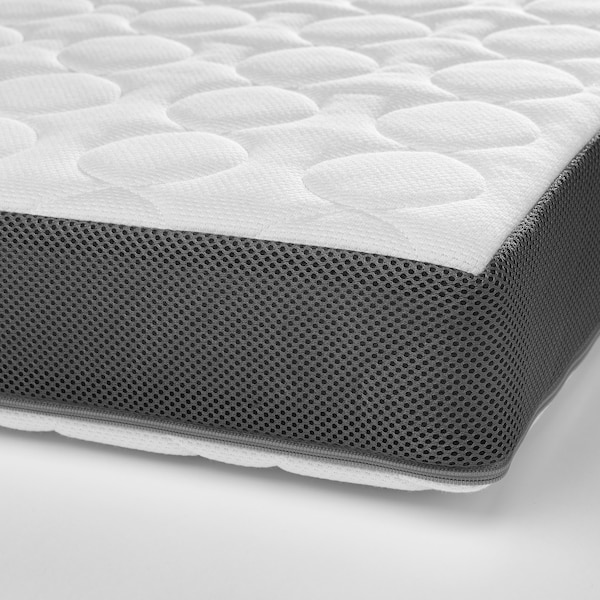 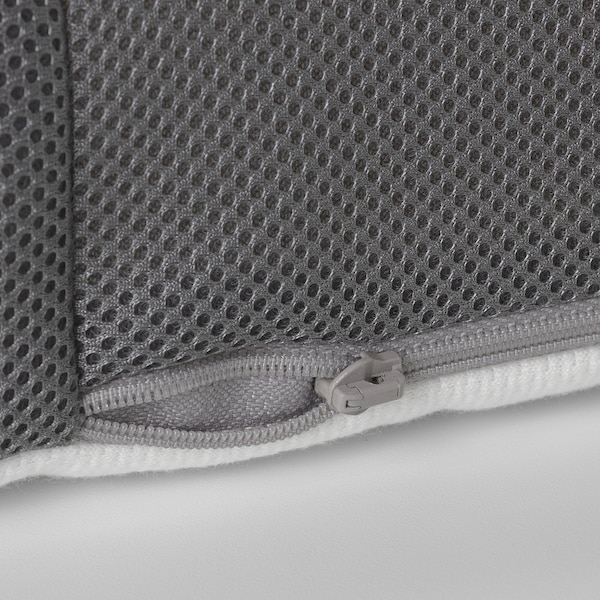 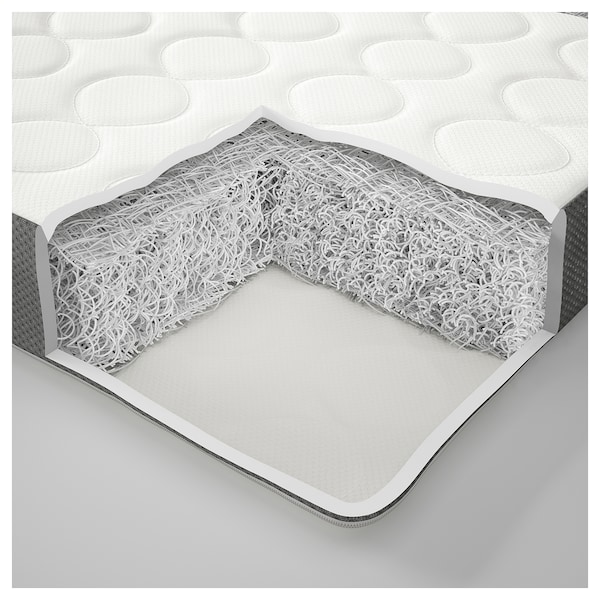 Wet mattresses can be a challenge during a child’s early years, just like dust and allergies. That’s why we developed this mattress with a washable cover and a core that you can rinse off and air dry.

The cover is easy to remove and is machine washable at 60°C.You can easily rinse off the mattress core with lukewarm water. The advantage with the open structure in the core of the mattress is that air can circulate while the material has an elasticity which provides nice comfort.Your child will sleep safe and sound on this mattress since both material and functionality have gone through tough safety tests.For safety reasons, it is important that there are no gaps between the mattress and the edges of the cot.The zipper is child-safe since we took away the tab on the zip. To open and close, insert a paper clip through the loop. Make sure you always remove the paper clip afterwards.Complies with EN 16890, a requirement specified by the European Committee for Standardisation, Comité Européen de Normalisation (CEN).Suitable for cots with inner dimensions 60x120 cm.We recommend IKEA fitted sheets for cots. They are dimensioned for our mattresses, which means the mattress retains its secure shape and size.Let the mattress core air dry and get completely dry before putting the cover on again.Designer 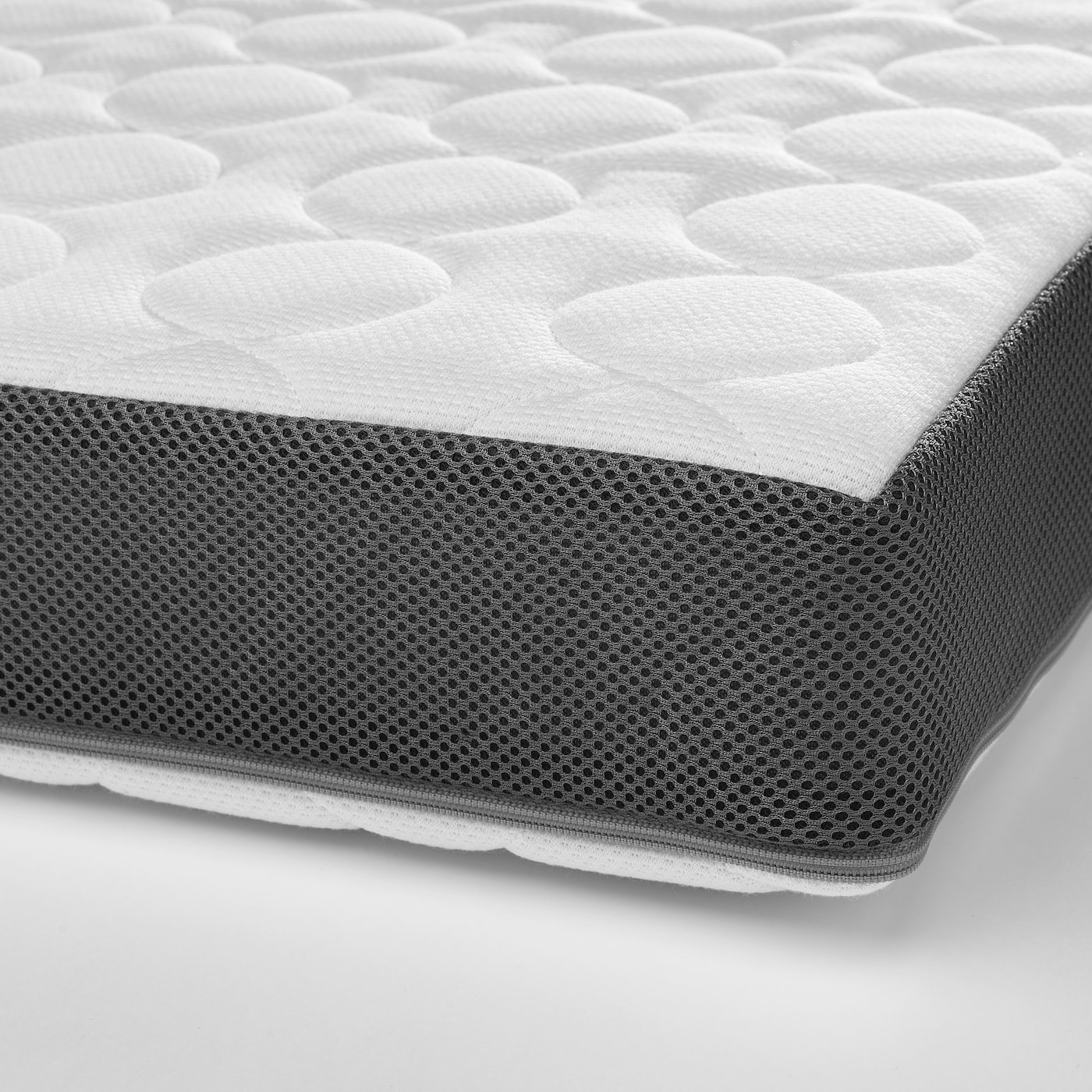 Children's mattresses to rinse off in the shower

Here at IKEA, product development involves a constant quest to find solutions for people's challenges, both during their first years and when they're older. We need to find smart and more environmentally sustainable materials, but also smarter ways to handle everyday problems – like accidents in cots during the night. When we developed HIMLAVALV and HIMLARUND baby and children's mattresses, we solved some of these challenges with the help of an innovative supplier.

Starting the day by taking care of a wet cot is inevitable during a child's first years, and something which most parents can relate to. But how could cleaning be made easier after an accident during the night? It's something which Anna Carme at Children's IKEA thought about when she and her colleagues were given the task to develop new children's mattresses. The work resulted in two washable mattresses – HIMLAVALV, suitable for babies, and HIMLARUND, suitable for older children who have an extendable. Both models have removable textile covers which are machine-washable, while you simply wash off the mattress core in the shower and air dry it before it's time to make the bed for the night.

Anna and her team found the material for the mattresses at a supplier who has worked with various types of fibres for mattresses since the 1930s. In recent years, they've developed a technique where they copy the best properties of natural materials, but manufacture using LDPE (low density polyethylene), a plastic used for things like food packaging. Anna describes the somewhat odd manufacturing process: "The material is melted down and then pressed through something that looks like a large colander", says Anna. "The warm, spaghetti-like threads which come out end up in a vat of water where they quickly cool and solidify to form large sheets which are then cut to size." The advantage with the open structure in the core of the mattress is that air can circulate between the "spaghetti threads" while the material has an elasticity which provides nice comfort.

The airy cores of HIMLAVALV and HIMLARUND provide good ventilation so that your child's temperature doesn't vary too much, which is important for a safe and comfortable sleeping environment. And as always when it comes to products from Children's IKEA, the mattresses have undergone tough testing and follow some of the world's highest safety requirements, says Anna. "For cot mattresses we test things like the firmness to ensure that the child's head doesn't sink too far down into the mattress." The project with the new mattresses has meant a lot of development work, both for the supplier and for Children's IKEA. An important goal was for all parts to be separable so that both the core of the mattress and the textile cover can be recycled in the future when the mattress is eventually thrown away. "Innovative work is often complicated," says Anna. "But also extremely exciting and necessary so that we can meet the challenges of everyday life."