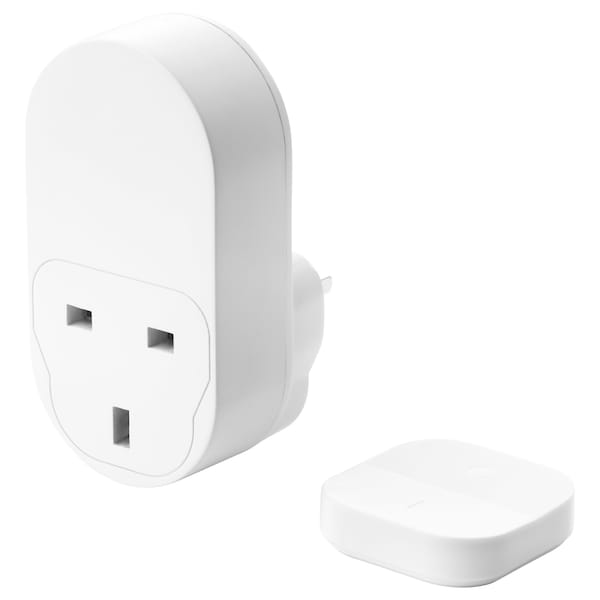 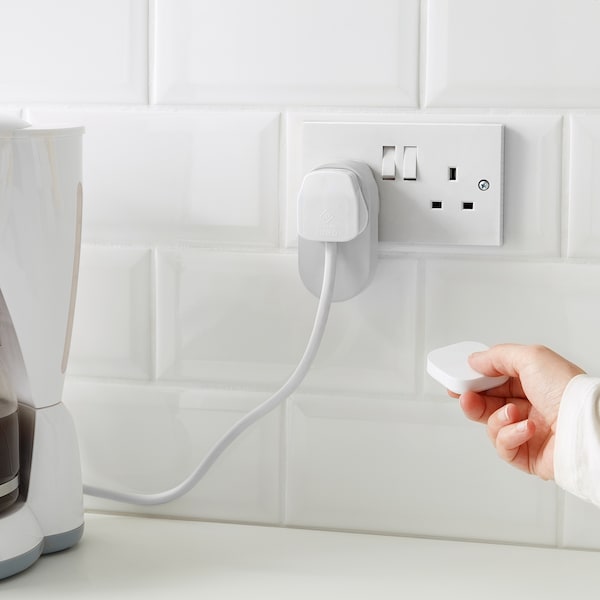 Now it's really easy for anyone to use smart products. This outlet kit allows you to connect any lamp, coffee maker or other household appliance to the control outlet and control it with the on/off switch.

With the kit you can use the on/off switch to turn on or off the device that is connected to the control outlet.You can use TRÅDFRI control outlet to connect a coffee maker or other small appliances to the IKEA Home smart app and TRÅDFRI gateway so that the appliance can be turned on or off with the app’s timer.A magnet makes it easy to fix the on/off switch to the wall bracket or other metal surfaces.You can add up to 10 lamps or smaller appliances so that all of them turn on or off at same time.This product bears the CE mark.Works with IKEA Home smart.The on/off switch has a maximum range of 10 metres when it is not blocked by walls.Battery is included, and last approx. 2 years.Max. output power: 2990W.Designer

4.4(13)
Plug £10, Switch £6. Set: £19?Chi ChengThe plugs and switches are, really good and even better with a gateway. However ikea sell the plugs for £10 and the switches for £6. But this set of both is £3 more expensive.4
Perfect gadgetScott9This plug combined with a remote on/off switch is what you need to save bending down to switch things on and off. I’m going to buy more!5
Simple solutionOhOkayA cheap, but well built smart plug for HomeKit. Would highly recommend.5
Neat and great value solution for room lightingXMPeteA very neat way to combine multiple lights, not only Ikea LED’s, but other lamps to all work at the press of one switch. Great price, and quality too.5
Works well but Tradfri is clumsythinking cameraThis works very well both with the remote and through apps using Apple Homekit. It's very good value for money. The only downside is the Tradfri system: this took me about an hour and a half to set up because the manuals and other information for Tradfri (hub and devices) is so poor (I have a Masters degree in IT and have lots of smart lights and devices in the house) and because the system set up is so limited. Trying to add the remote and switch to the existing bedroom simply failed repeatedly, without any explanation or even error message. It just didn't work. I eventually discovered that every remote creates its own room and that the device it controls must be in the same room. As the room where this is needed already had smart lights and a remote for them, it was impossible to add the remote and switch to that room and I eventually had to create a fictitious room just for these items. Since then it's all worked fine. There's almost no support material at IKEA, just invitations to phone them. The leaflets that come with the devices are next to useless. This is not something that the famous IKEA pictures can cope with. If you want smart home to be more than an occasional toy, Tradfri must be better than this.5
Perfect for the jobMummyJulesFI use this for string lights around my sons high sleeper bed so he can turn them on during the night if he wakes up. It has a handy magnet to attach to the metal bed frame. Works perfectly for what we need!5
Cheapest homekit enabled plugszeddersI bought these as they are the only homekit plugs in UK that I am aware of that work with a hub and not direct wifi or bluetooth. You need the Tradfri gateway for this. I only wish Ikea would make the pairing process easier. Works with all the major voice assists too. Love them. They are small but not as small as some of the others I have seen.4
Cheaper than the competitiDazletsMuch cheaper than the competition, especially when it comes to being Homekit compatibility. Connecting the socket and switch to the gateway proved to be very simple after a read of the instructions. The Apple Home app saw the socket straight away once powered up, It operates instantly using either the switch or an app. This was homekit compatible straight out of the box. Updates for the gateway, socket and switch were available and downloaded and applied with no problems at all. If you’re after Homekit compatible sockets, look no further.5
Brilliant value for Apple HomeKit compatible plugOlly912Great value basic smart plug and switch. Using with Ikea gateway and since the recent update all works perfectly with Apple HomeKit / HomePod which is fantastic - just appears in the app once set up. Siri can now control connected stuff directly, via automations or remotely. Well done Ikea for getting this out there and at a brilliant price.5
Good for the moneyTrainpainterGreat value, works with Google Voice control4
Good kitMr JinxNice and easy to setup and use, ive read previous reviews where the socket doesn’t work with Apple Homekit but I’m happy to see that the firmware has been updated and it works seamlessly. Only draw back I’ve found is the lack of energy monitoring but as the socket works out roughly a third the cost of other sockets that basically do the same job, I can live with it :)5
Does what it saysMitch1960Does what it says but no more! It doesn’t readily integrate with HomeKit or Alexa3
Finen21brownPlug is fine. Controller is fine. Tradfri system overall is poor as it is limited to 25 devices2
Skip listing
Story

Rebecca Töreman is facing a group of journalists. They’re visiting the headquarters of IKEA design with hopes of glimpsing innovative products. They bustle to see and touch what Rebecca and her team have spent the last two years creating: the IKEA Smart lighting range.

Smart lighting is one way we’re using technology to improve life at home. Imagine a cosy weekday family dinner, lights glowing soft and warm. When the meal is done, the table is cleared for homework, which calls for clean, bright light. The goal of Rebecca and the Smart lighting team is to make that transition simple and smooth. Literally, it can be at the touch of a button. “Lighting is such an important part of life at home,” says Rebecca. “You do so many activities every day at home and the light needs to support you in doing all these things.” The range is made up of products that can be combined to create a personalised home lighting solution. It includes LED bulbs, panels and cabinet doors that can all be controlled by a remote. You can dim them and even change the tone of the light, from warm to cold. One remote can control up to 10 Smart lighting products.

Smart lighting technology isn’t new, but so far it hasn’t been so accessible. “It’s been very expensive and complicated,” says Rebecca. “If we can develop Smart lighting that’s easy to understand and affordable, it actually becomes accessible to the many people.” When it comes to cost, Rebecca and her team set a personal goal. “What would we want to pay for a light bulb like this?” asks Rebecca. “We’ve been going back to this idea throughout the whole process.” Working with large volumes has helped lower costs. And, by collaborating with experienced tech suppliers, we’ve been able to find smart ways to save. Those savings are then passed on to the customer.

By offering “kits” that have everything you need to get started, we make it easier to have Smart lighting in your home. And, if you end up wanting to expand your solution, it’s simple. “You can start with the function that suits you and your family’s life, and you can build on that,” says Rebecca. You can look forward to even more Smart lighting products from IKEA in the future. “There will be upgrades and new things customers can do to improve and build on the system,” says Rebecca, who sees a fuss-free future where very little can interrupt a lazy afternoon. “If you sit in your sofa and want to turn on the light, but the light switch is over on the wall, well, obviously with the wireless remote you don’t actually have to get up!”