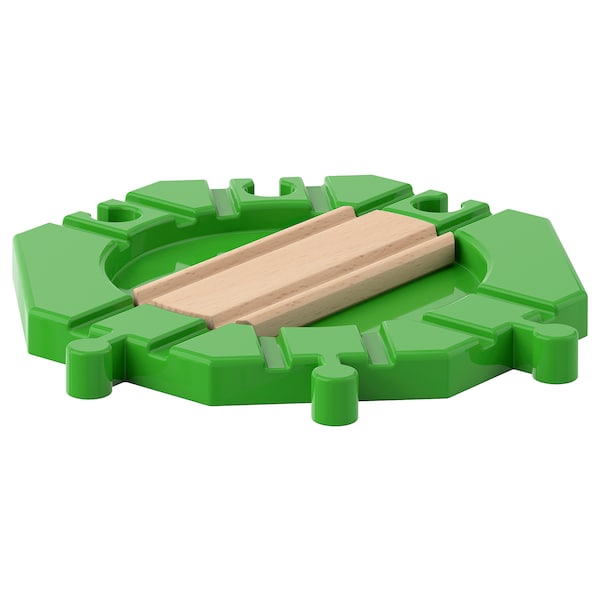 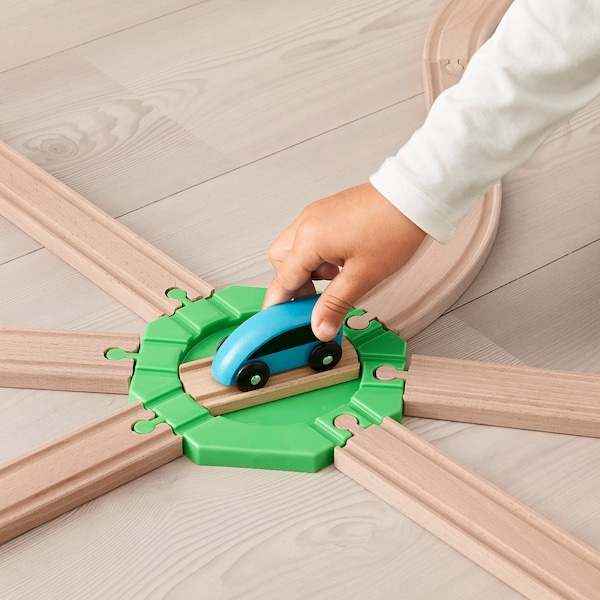 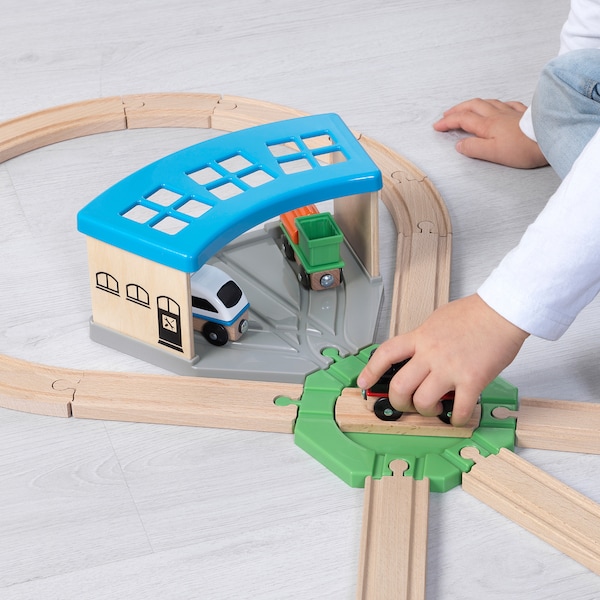 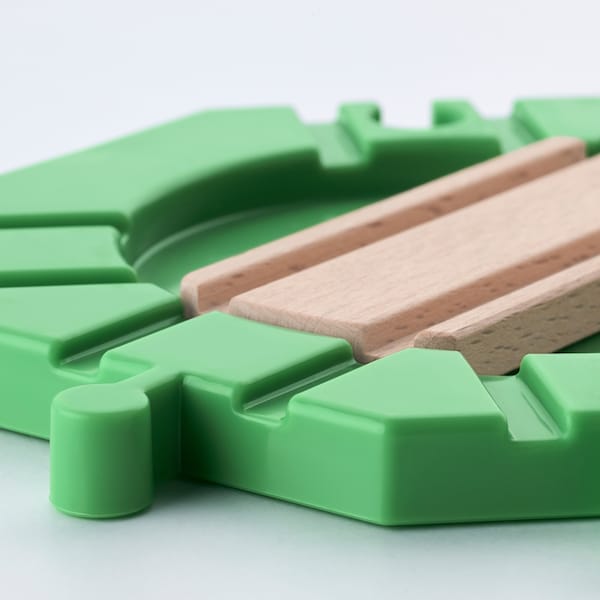 With this turntable you can quickly change the direction of the trains. Perfect during rush-hour when people, cars and oncoming trains cross each other’s paths.Develops the imagination, fine motor skills and logical thinking of your child.Can be used with most other railway systems on the market.Recommended for children 3 years and older.This product bears the CE mark.Designer

4.7(9)
grandmaHBought for my grand daughters (age 2 and 5) to go with their set. They love it and play with the trains for hours.5
A fan favourite!Mama SilveyThe kids have always loved Ikea trains and train sets. This works with the other sets seamlessly and has sparked their imaginations to new configurations and limitless possibilities.5
Lillabo turntablePurple abuelaBought this for my grandson - great add-on to the basic set.5
Turnaround TerrificAMcCannMy sons love this turn table. It is small so only one train piece can fit on at a time but it actually enhances the play as they have more to move; unhook, re-hook, etc. Very pleased with this product. Great value for money too.5
Great for the price you payMomofOneThis is a decent turn table for the price Ikea charges. I know there are better ones out there but they cost a lot more.4
LILLABO TurntableHK2017My son liked it and it is heavy duty product.5
good onezhwbgood product, my son like it.4
Great toy!DM420My kids at my daycare love it - just wish the wood part was attached so they wouldn’t lose it!4
Skip listing 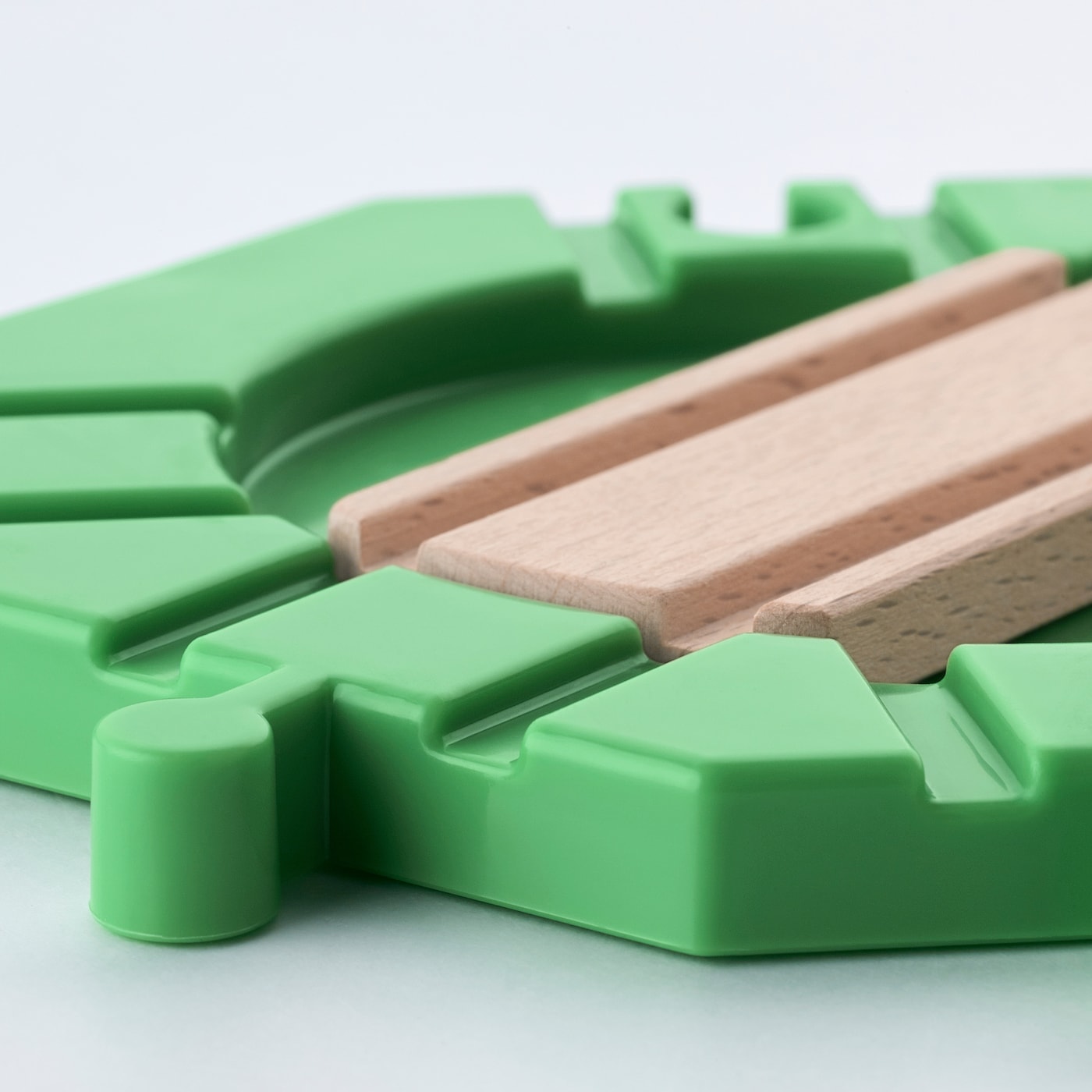 With fully-loaded cars, the train pulls into the small town and brakes at the station to release some cars before rolling on towards new adventures ... Generations of children have played the same way: transformed the floor into a landscape where railroad tracks wind their way around a fantasy world where anything is possible. The fact that wooden toy trains have survived so long is because it encourages playing in different ways. Bodil Fritjofsson, who has developed and updated the LILLABO toy series, including a new train set, stands behind this. ”It involves both creative play where the child constructs their own train tracks and the surrounding landscape, and classic role playing where they imagine the train in their own world”, says Bodil, who believes that many parents like the fact that a classic train track like LILLABO is made in solid and sustainable wood.

How can Bodil know that wooden trains and other toys are still relevant for today's children? Some of this knowledge comes from Children's School, a department at IKEA which acts as a knowledge bank and teacher for everything concerning children. Jessica Bondesson works here and explains what Children's School does. ”We want to help our employees to really understand a child's development and needs so that IKEA offers good and safe children's products”. Jessica is convinced that the train track and other parts in the robust LILLABO series have a place in our technically advanced time. Toys stimulate the imagination, develop a child's logical thinking, and encourage socializing – something which children really appreciate. ”In 2015 we carried out a large survey about playing, Play Report, which shows that children have similar needs around the world and that they like playing with their parents”. Parents tend to agree, the survey shows that most parents think everyone should play more and work less.

LILLABO has been in our range since the 1990s, but with the new parts the series jumps into the modern era where high-speed trains have replaced steam locomotives and where cars carry loads in colorful containers. It's a train set which every child can recognize from their own surroundings – even if it's in wood. How much candy can fit in a container and how heavy a load can the locomotive pull up the viaduct? By adding new parts to the series, Bodil and her colleagues hope they help to increase play and creativity. ”And with a battery and lighting on the train, I also think that older children will play with LILLABO. You're never too old to build fantasy worlds”. 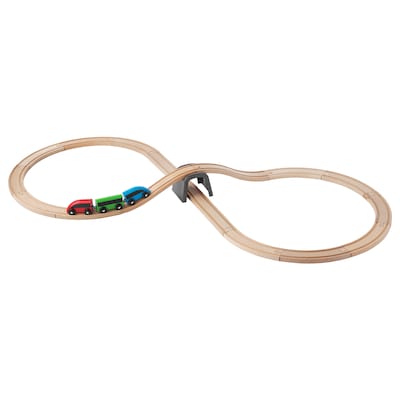 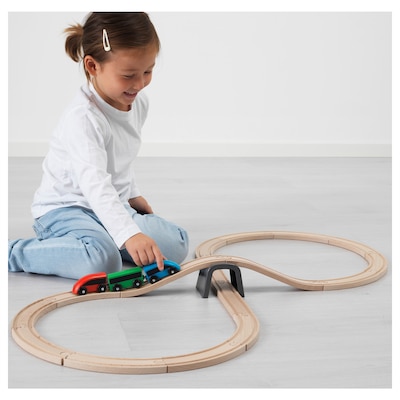