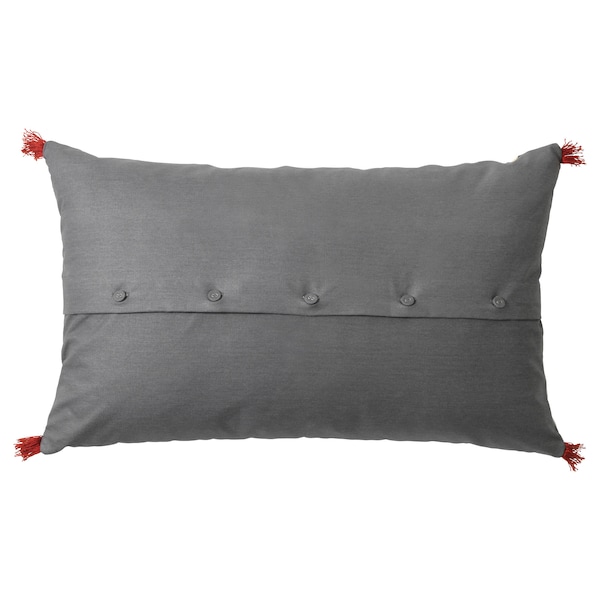 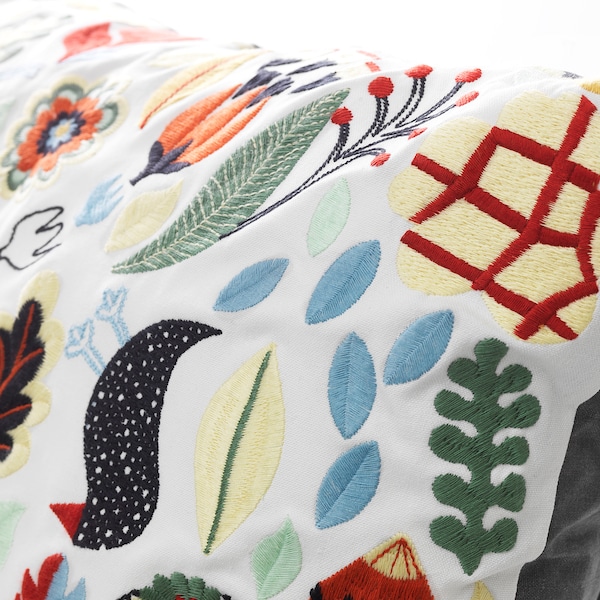 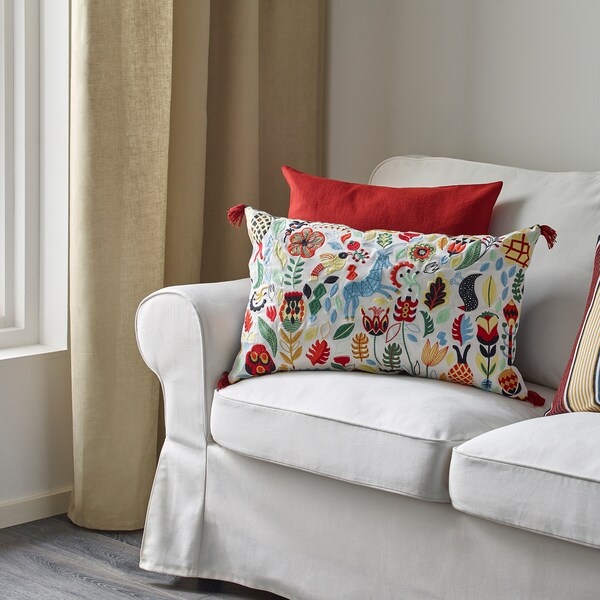 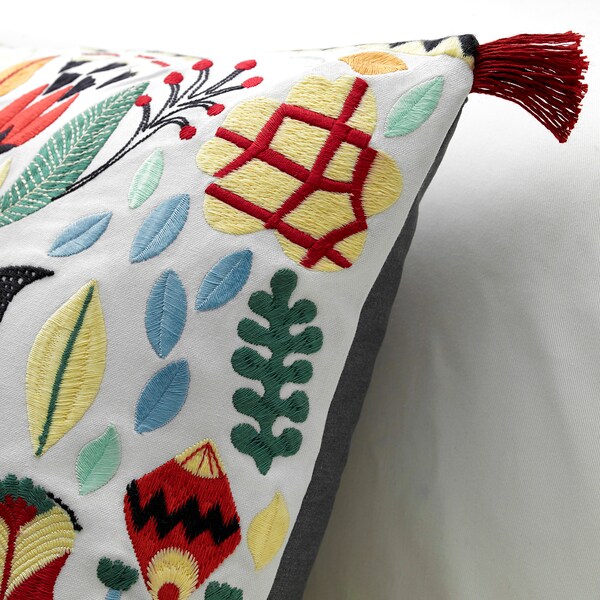 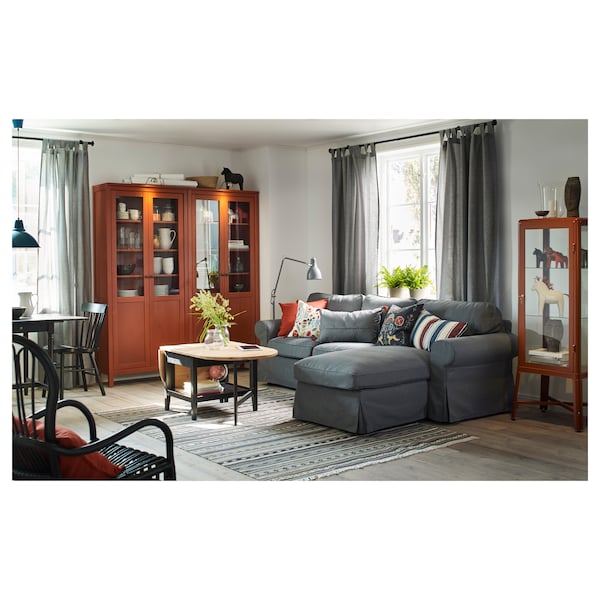 4.9 104 Reviews
Inspired by the traditional cushion with wool embroidery used in Swedish homes and horse-drawn coaches. The detailed embroidery gives a genuine expression and brightens up your sofa, bed or armchair. Read More

Embroidery adds texture and luster to the cushion.

You can easily vary the look, because the two sides have different designs.

The buttons make the cover easy to remove.

Turn the cover inside out and close before washing.

Iron on reverse side.

To lower our environmental impact this product is offered without any packaging.

All the cotton in our products comes from more sustainable sources. This means that the cotton is either recycled, or grown with less water, less fertilizers and less pesticides, while increasing profit margins for the farmers.

"Sketching the RÖDARV, ROSENFIBBLA and ROSENRIPS textiles collection, I was inspired by traditional Swedish wool embroidery. I thought about how women in the old days used their plant-dyed yarn to weave and create wonderful textiles by candlelight. My imagination ran free when I thought about all the flowers, picked in wild meadows. A treasure, rich in design and color, to stand out in the otherwise simple homes. And it’s just as beautiful in our modern homes today." 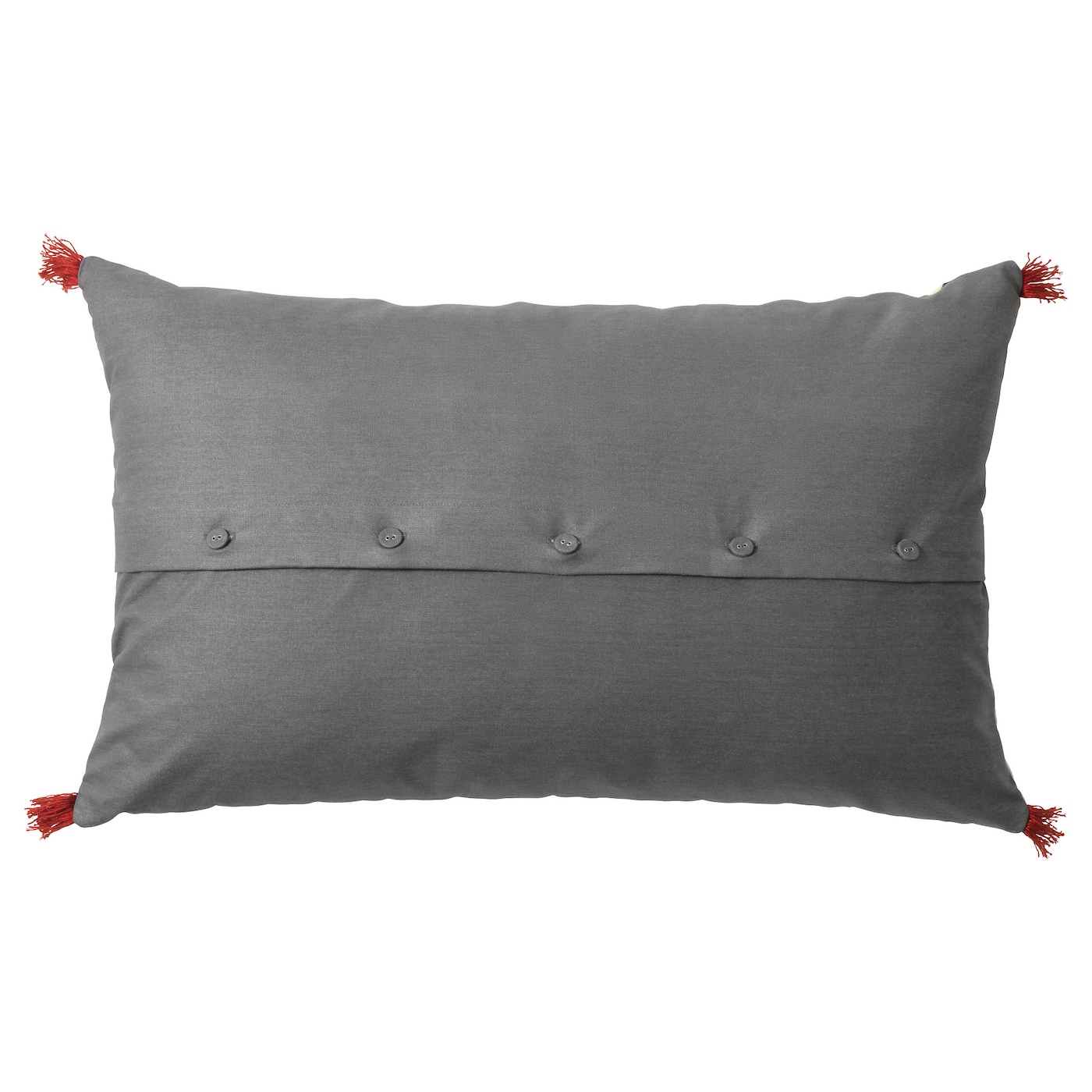 From coaches in Sweden to homes across the world
Imagine riding in a horse-drawn coach in the 1700s or 1800s. The clip-clop of horses' hooves. The slight back-and-forth swaying. A richly detailed cushion on the wooden bench beneath you. This was the inspiration for RÖDARV—a cushion for today's homes that embraces the Swedish tradition of wool embroidery and coach cushions.
It all started as an IKEA textiles team went to a museum called Regionmuseet about an hour away from the IKEA headquarters in Älmhult, Sweden. The museum housed a collection of Swedish textiles dating back to the 1600s. The team was especially drawn to embroidered cushions of the 1700s and 1800s from Scania, Sweden’s southernmost region. Back then, women crafted lots of textiles for their homes and started at a young age to make pieces for their dowry that would become part of their new home once they were married. Women even made coach cushions so that journeys would be more comfortable. These cushions were used at home, too. "They were so striking because of the free, naive way of embroidering combined with the strong, beautiful colors," explains Susanna Leo, a design coordinator who was part of the team. "Each cushion is unique and carries its own history. It's creativity on the highest level."

Designed with imagination and modernity

Plants, people, geometric patterns and animals usually appeared on the traditional Swedish coach cushions that inspired RÖDARV cushion. "The motifs of the old coach cushions are full of imagination and aren't always perfect or symmetric, which shows traces of the hands that embroidered them," Susanna says. RÖDARV is a modern interpretation that captures the genuine feeling we wanted. So, even though our modern lives don't call for coach cushions anymore, maybe you'll hear a faint clip-clop of history the next time you cozy up with a RÖDARV cushion.
More Cushions