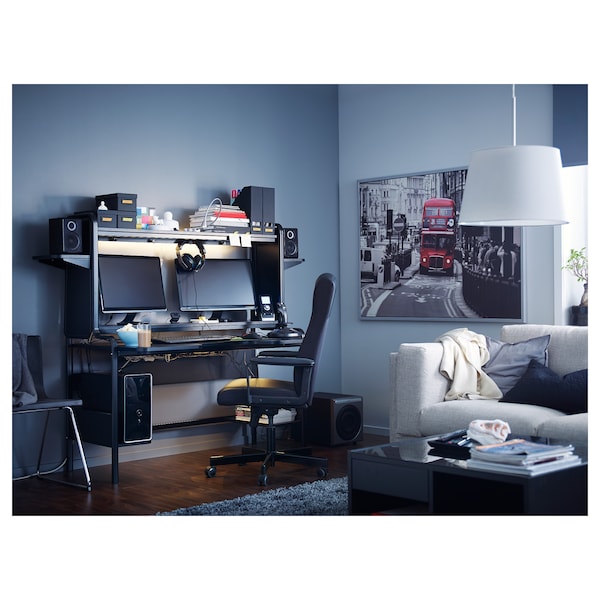 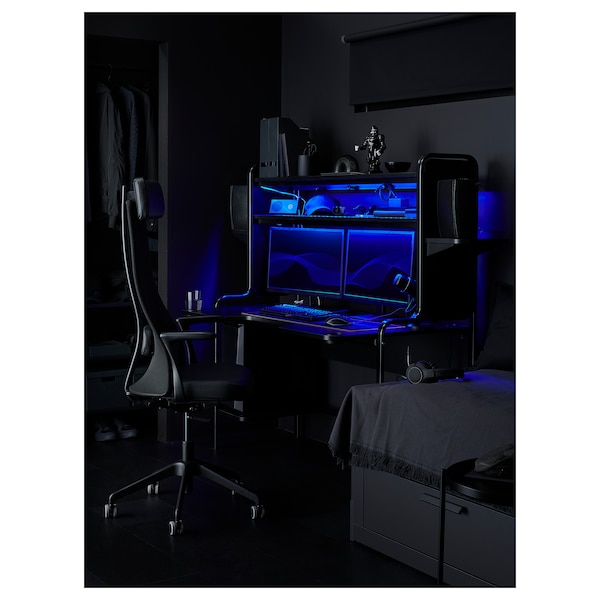 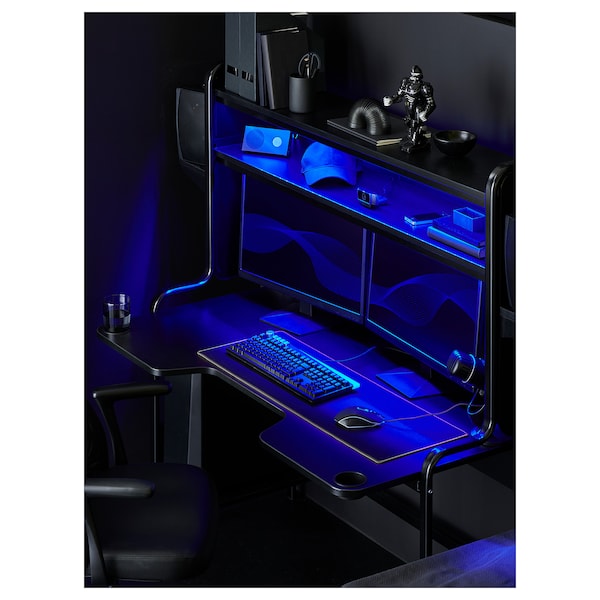 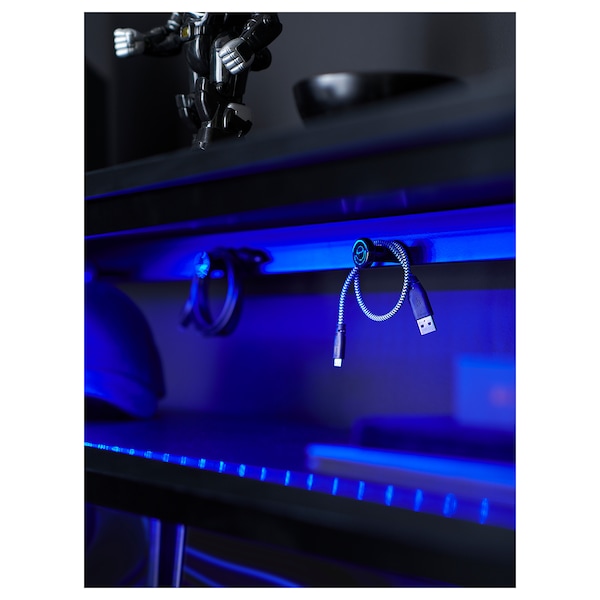 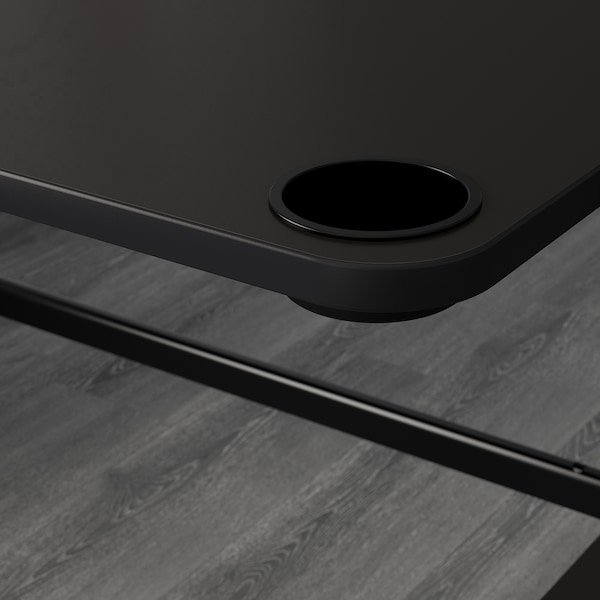 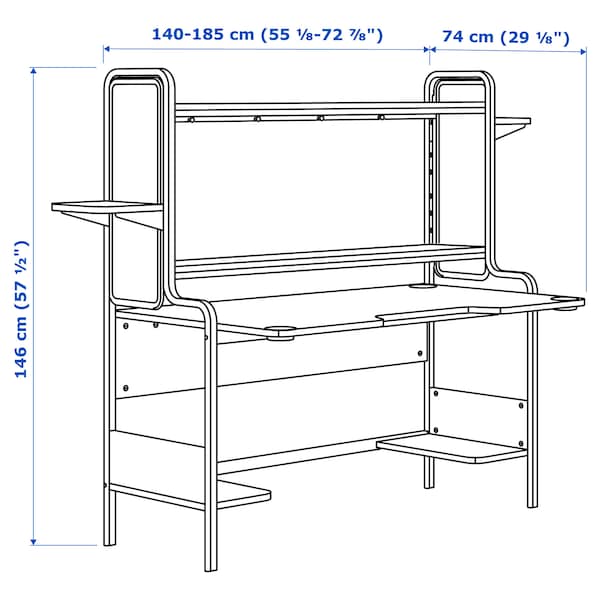 4.5 76 Reviews
How do you make the perfect gaming station? That's what we set out to do with FREDDE desk by researching competitive gaming and enlisting a gamer designer of our own. Read More

The workstation is extra comfortable to work at, because the contoured table top allows you to sit close and supports your wrists and forearms.

Keep your coffee, beverage or snacks nearby in the cut-out cup holders on either side of the table top. The cup holders are made of plastic that is approved for use with food.

Hang the small shelves inside or outside the side panels, depending on your needs.

You can fit a 32" computer monitor or TV by removing the shelf above the table top.

The high side panels help block sunlight and prevent distracting glare on your computer monitor.

Can be used with SIGNUM cable trunking to keep all cords in place.

Measure the depth and width of your stationary computer. The measurements should be less than those of the shelf.

Check regularly that all assembly fastenings are properly tightened and retighten when necessary.

Just right for you

You can customize FREDDE workstation in many different ways so it’s perfect for playing games, surfing or studying. You can adjust the height of the monitor shelf, hang the speaker shelves inside or outside the side panels, and keep your CPU safe and out of the way on a shelf under the workstation. 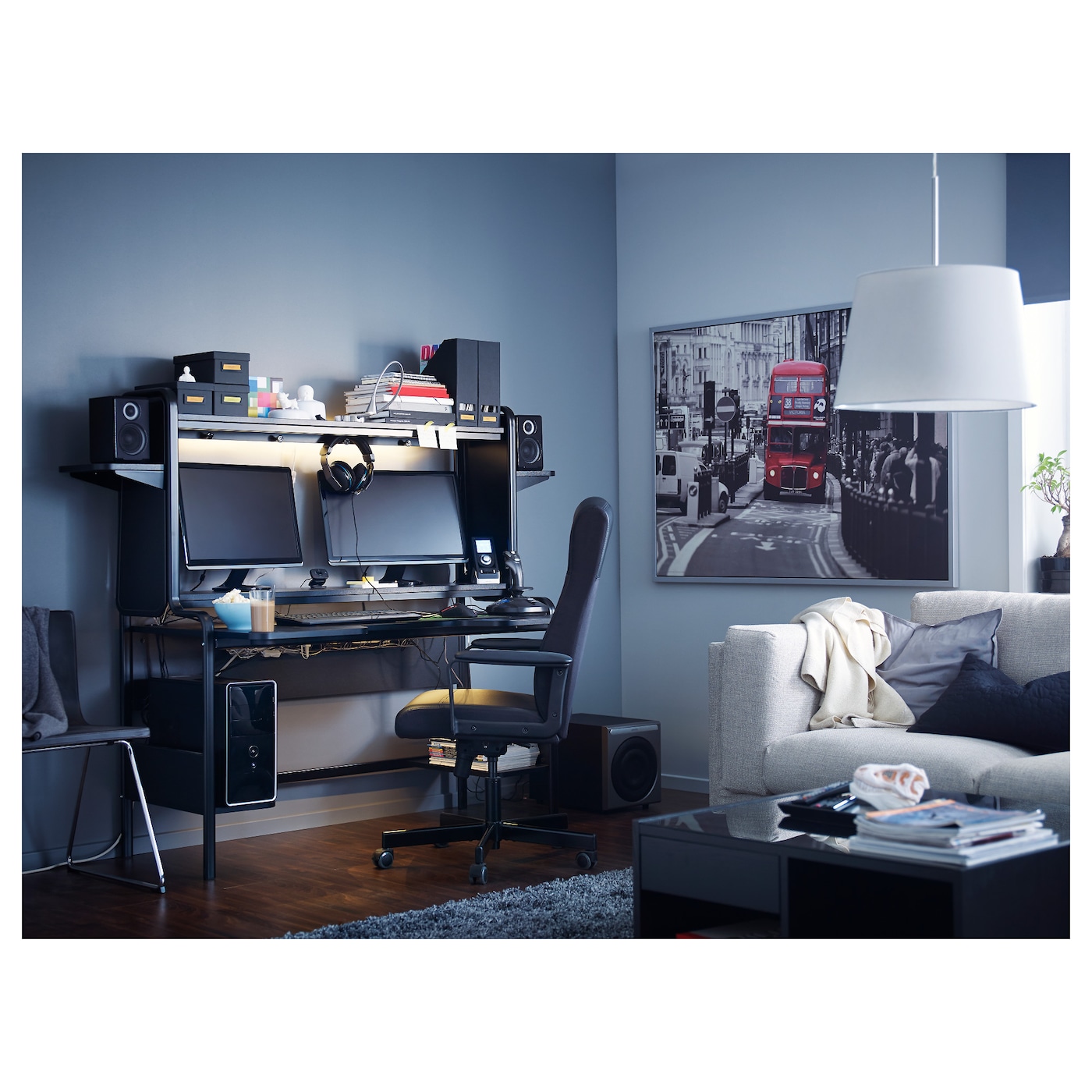 Getting gaming right
If you’re not in to computer gaming yourself, perhaps you have children who are. Across the world, gaming is booming, and naturally IKEA should provide furniture designed for it. So how do players set up a game station to create that immersive gaming experience, what do they need to feel comfortable and supported while playing? When creating FREDDE desk we needed to know. How we found out? We asked a gamer.
David Wahl is not only one of our designers. He’s a gamer too. Of course he got the task. “When I started playing video games you'd have to make sure your friends were free, and someone’s house was free, then make your way down the street, console in hand to play,” David says. “Now, it's just as likely that you're playing with people in Shanghai or Sydney or Stockholm.”

One of the advantages of gaming's move beyond the TV or the family computer is that gamers are free to make a space customized to enjoy each game's full potential. “A big part of gaming is the immersive experience,” David says. “So my first move when designing FREDDE was to make a cut out in the desktop so that you could be closer to the screen and have almost a command central sort of feel, while also getting support for your arms at the same time.”

Made to be customized

FREDDE fits speakers, a 32" screen, or a couple of smaller screens on a height adjustable shelf. David also had a personal wish. “I used to love playing driving simulator games where you would often use pedals, the same as a car,” he says. “I always found it annoying if you had cables or other things in the way when you were driving so I made sure to design the desk with an unobstructed space for pedals on FREDDE.”

David is proud to see the gaming community making the desk their own. “If you do an image search for FREDDE it's fantastic to see how people are adapting it to create their own perfect game space, which is exactly in tune with what I hoped.”
More Drawer units for home