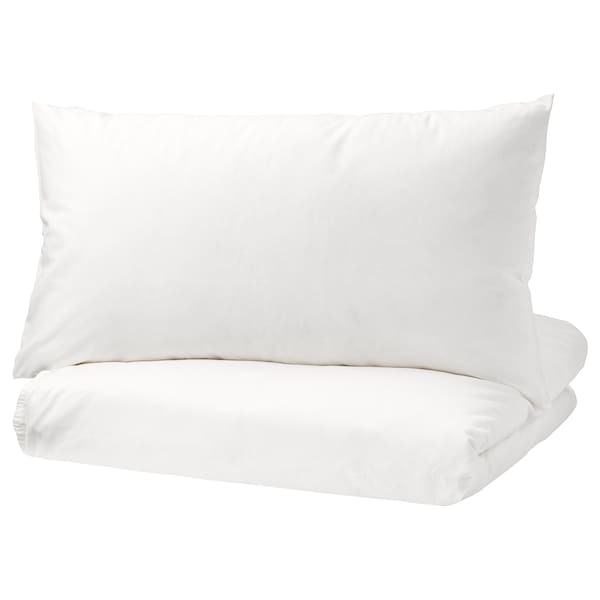 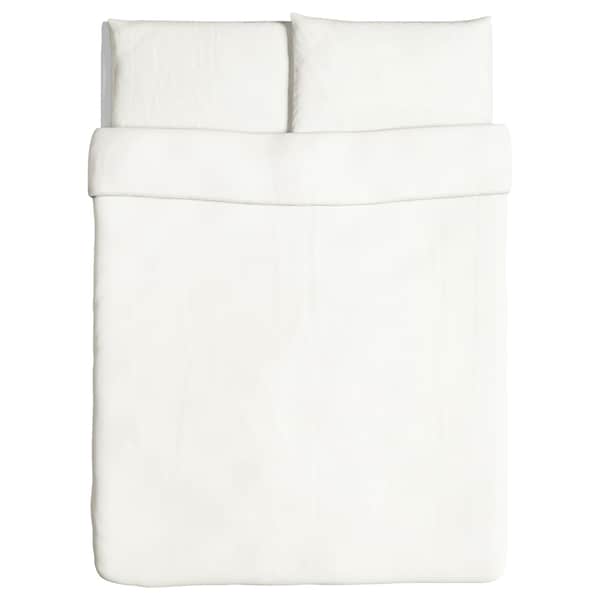 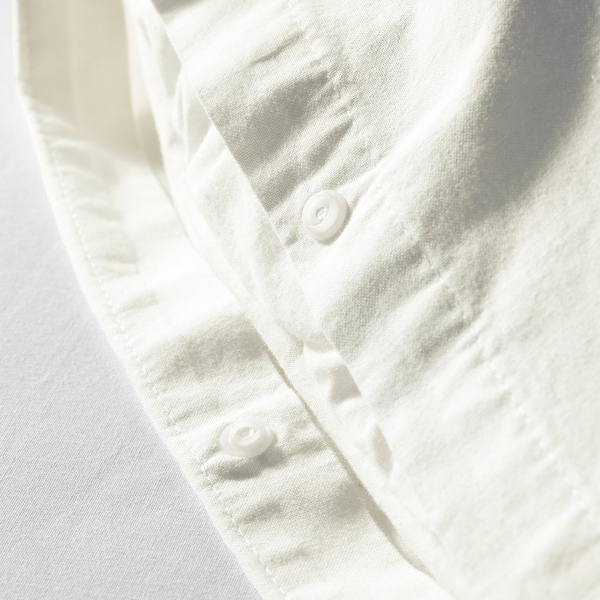 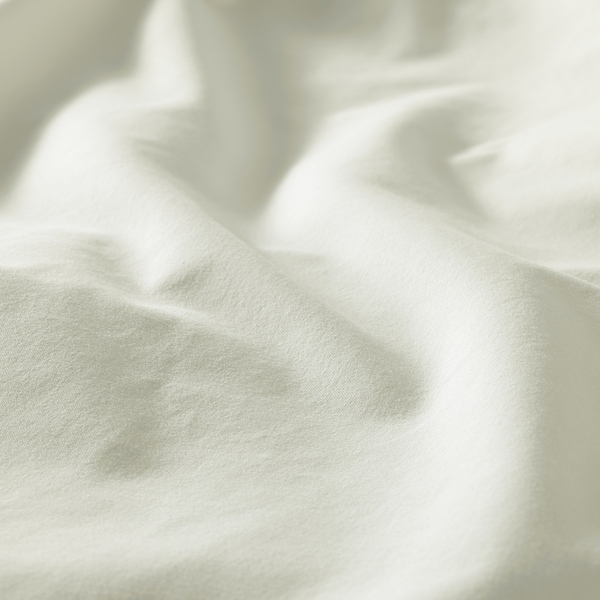 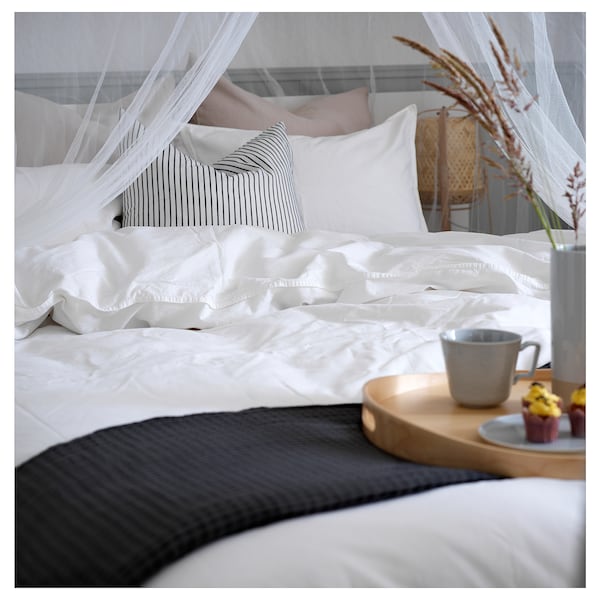 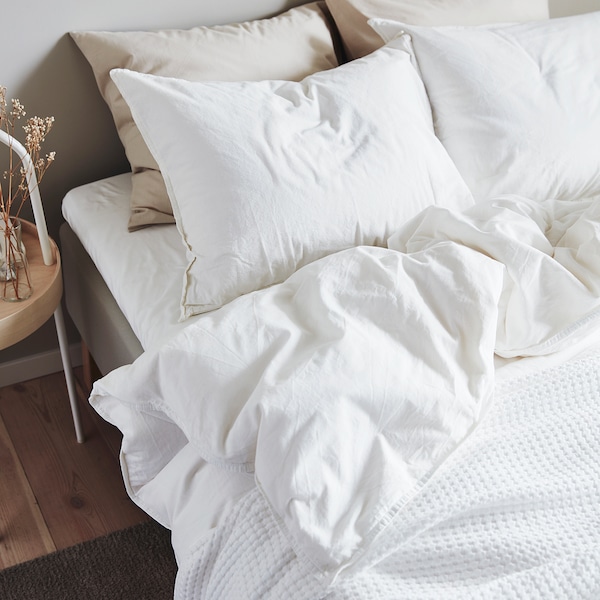 ÄNGSLILJA duvet cover adds a casual and relaxed air to you bedroom. The washed cotton fabric gives harmonious colors and feels as soft as it looks so you can wake up feeling fresh and well-rested.

The duvet cover is washed using a method that brings out its harmonious colors and gives a softer feel against the skin.Pure cotton that feels soft and nice against your skin.Concealed press studs keep the duvet in place.Pillowcase with envelope closing.125 thread count.Thread count indicates the number of threads per square inch of fabric. The higher the thread count the more densely woven the fabric.Includes: 1 Full/Queen size duvet cover and 2 Queen size pillowcases.Designer

4.4(112)
Lovely color, nice textureSIMALovely color, nice texture5
Nice DuvetIvetteNice duvet cover for the price.5
ÄNGSLILJANathalie A.Beautiful5
Clean and PracticallauraVery affordable duvet set. Perfect as a staple and for guest rooms. Thanks Ikea!5
Great quality!AMANDASo good. Doesn’t wrinkle (at least the wrinkles look purposeful like in real linen), stays put on the duvet, washes well. We’ve bought one for every bed in the grey and cream colors.5
Like itEMMANUELIt matches our comforter and cool to use on summer days.5
DuvetTammyIt’s great, however, it would be great if there were ties so the insert would stay in place.4
Material is thick but whenMARIADONNAMaterial is thick but when I washed it the thread on the pillows started getting loose and ripped. I followed the care instructions and yet this happened3
Soft and nice snap closureTerriLooking for a cover that my cats claws would not snag and this works pretty well.5
love itCAROLlove it4
My daughter bought for herSusanMy daughter bought for her 17 year old daughter and sh loves it on her trundle bed, perfect for her age and soon to be in College which she can take with her!5
No softBRENI had purchased something similar in the past which was much softer. This feels heavy and scratchy. It wrinkles quite a bit after washing.1
NiceElizabethComfortable and easy to use5
cute with a duvet insertallicute with a duvet insert5
Everything bedding should beElisaPerfect in every way. I have a queen bed and sized up to a king set, and am so glad I did! It fit perfectly. The edges draped nicely over the sides and bottom - anything smaller would have been too short for two people to share. A little difficult to get that giant duvet inside the cover by yourself, so I had the hubby help ;) I am in LOVE with the texture of this set. Very earthy, natural, and lovely.5
Super comfortableAlexSuper comfortable5
Nice neutralKatSoothing, cool grey is perfect for a bedroom. The fabric really softens up after a few watches and breathes nicely. I put an old woven cotton blanket inside to make a perfect light summer bed covering.5
Sadly disappointedSuzanneI never received this . Order was in processing for 2 weeks, then said it was shipped out 2 weeks after that. All this time they took my money. I even got a shipping notice from Fed Ex, that sat for 10 days, awaiting verification of delivery. Finally after 6 weeks I called customer service and they could not verify anything, said they do not know where my order was at. To then be told by customer service that they did not have any and could not say when or how long until I could get it. This frustrated me so much. If I didn’t reach out to them, I would still be waiting for no order at all. I will never order from IKEA again.1
AmazingHECTORAmazing product was looking for a product like this I had to buy another one because I loved it so much and I know that ikea will not have it and will be hard to find5
Not a duvet cover, just a giant sackJenniferno ties inside.. fundamentally not a duvet cover just a pair of sheets sewn together. Also the thread count is very low, looks linen-ey in the photos looks super cheap in person1
Skip listing

Cotton is one of the world's most appreciated and used natural fibers. Textiles in cotton are soft, hardwearing and can be washed at high temperatures. They are also good at breathing and absorbing moisture – making them pleasant to wear close to the body. Today at IKEA we use more and more recycled cotton and strive to make sure that all the new cotton we use has been grown and produced with less and less amounts of pesticides, fertilizers and water.