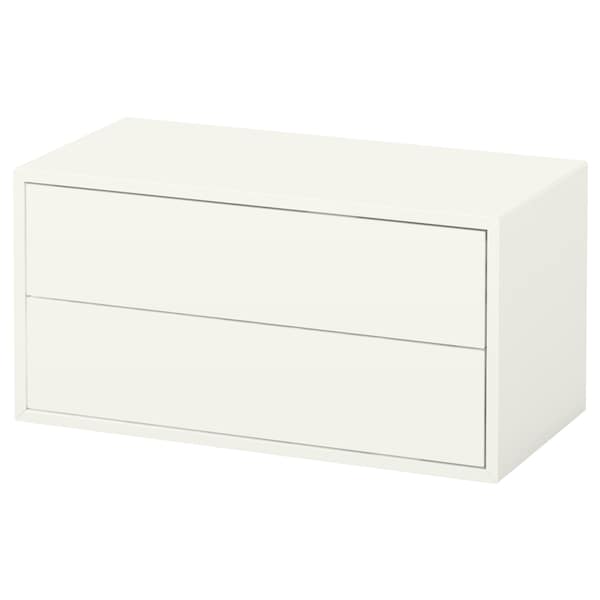 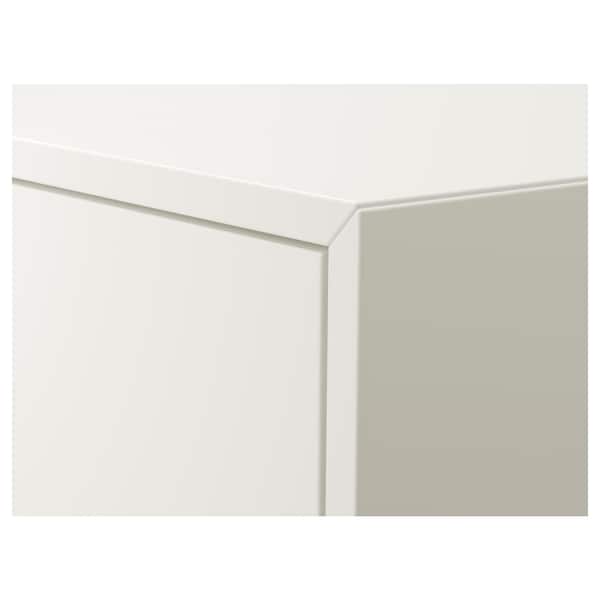 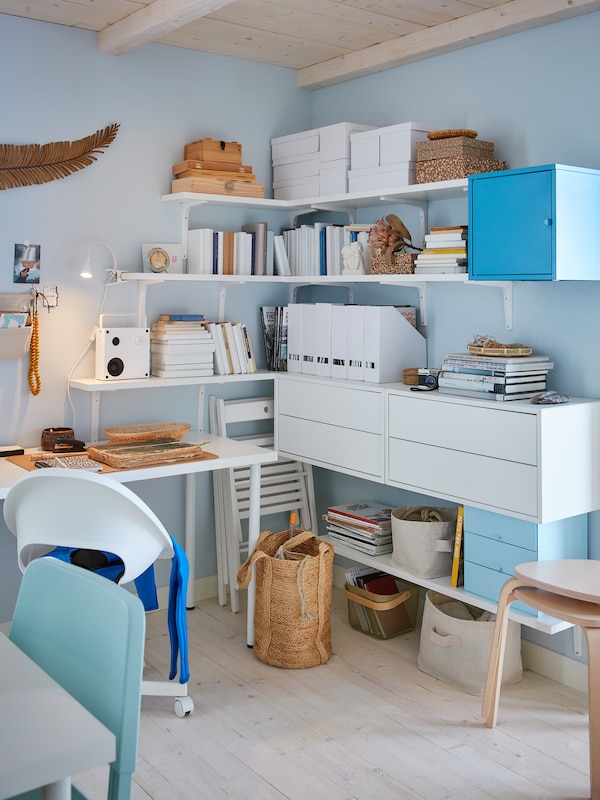 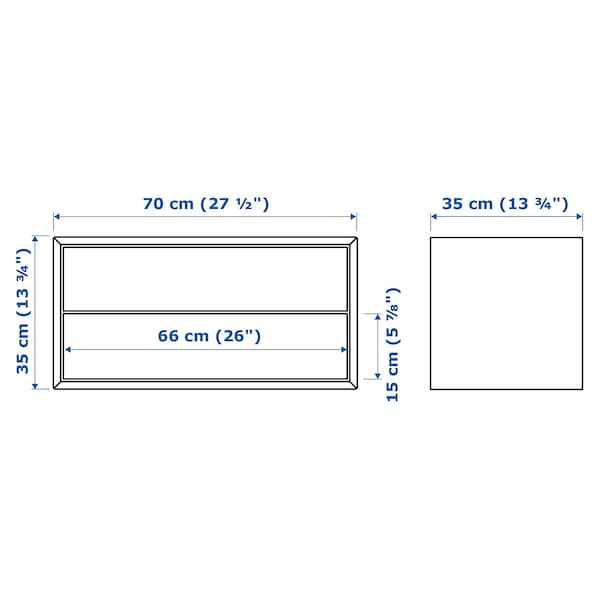 A simple unit can be enough storage for a limited space or the foundation for a larger storage solution if your needs change.You can create your own unique solution by freely combining cabinets of different sizes, with or without doors and drawers.You can choose to place the cabinet on the floor or mount it on the wall to free up floor space.The drawers have integrated push-openers, so you don’t need knobs or handles and can open the drawer with just a light push.Must be completed with EKET suspension rail if you choose to mount the frame on the wall. This frame requires 1 suspension rail, 70 cm long, sold separately.To be completed with feet, legs or plinth if you choose to place the cabinet on the floor. Sold separately.Max. load 10 kg per horizontal surface if placed on the floor.The max load for a wall-hung cabinet depends on the wall material.Designer

3.8(8)
Great fo keeping the television room tidy.Miked1945Quite complicated to assemble and many extra parts as on floor. Difficult assembling outer case did not slot in easily. Surprised but delighted when drawers put in as it looked good and the drawers work. A lot sturdier than other items that we have bought.4
Excellent for bottom of wardrobeIan yoPuts together easier than most Ikea units, but read the instructions very carefully. Good quality, nice drawer movement, Bit pricy, but good quality.5
LovelyFlat pack queenWell worth the effort, drawers look great. Took 3 attempts with different raw plugs as I was hanging the drawers on a stud wall but once done they look great my son is over the moon5
Fits under the Eket cabinet for office storagemiller33I have had difficulty with the drawers getting them balanced and when I finally did, after I'd put things in they were difficult again to get in and out (first time I've had problems with Ikea furniture).2
Poorly cut materials made it impossible to assemblEket_är_värdelösI advise others not to buy this cabinet. It took a skilled carpenter 2 hours attempting to assemble before he gave up. The problem is the studs and grooves on one side have been poorly cut and do not marry up. He checked online and others have had the same issue. In the end, carpenter ended up breaking off the studs by mistake and had to nail one side together. Whoever says this is easy for a non techie, or even a techie to assemble is wrong.1
Perfect storageMars6Bought for bathroom, fits perfect under sink. Holds lots and looks really good.5
Elegant and clean lineskatibeeA really useful piece of furniture - shame the legs/frame weren't in stock when I bought it.4
Eb26Easy to build, does the job4
Skip listing 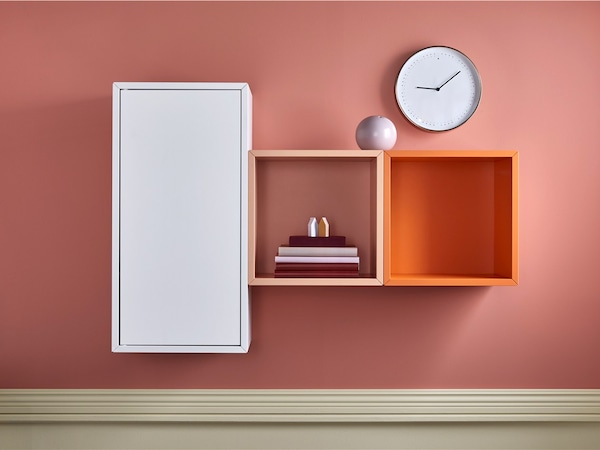 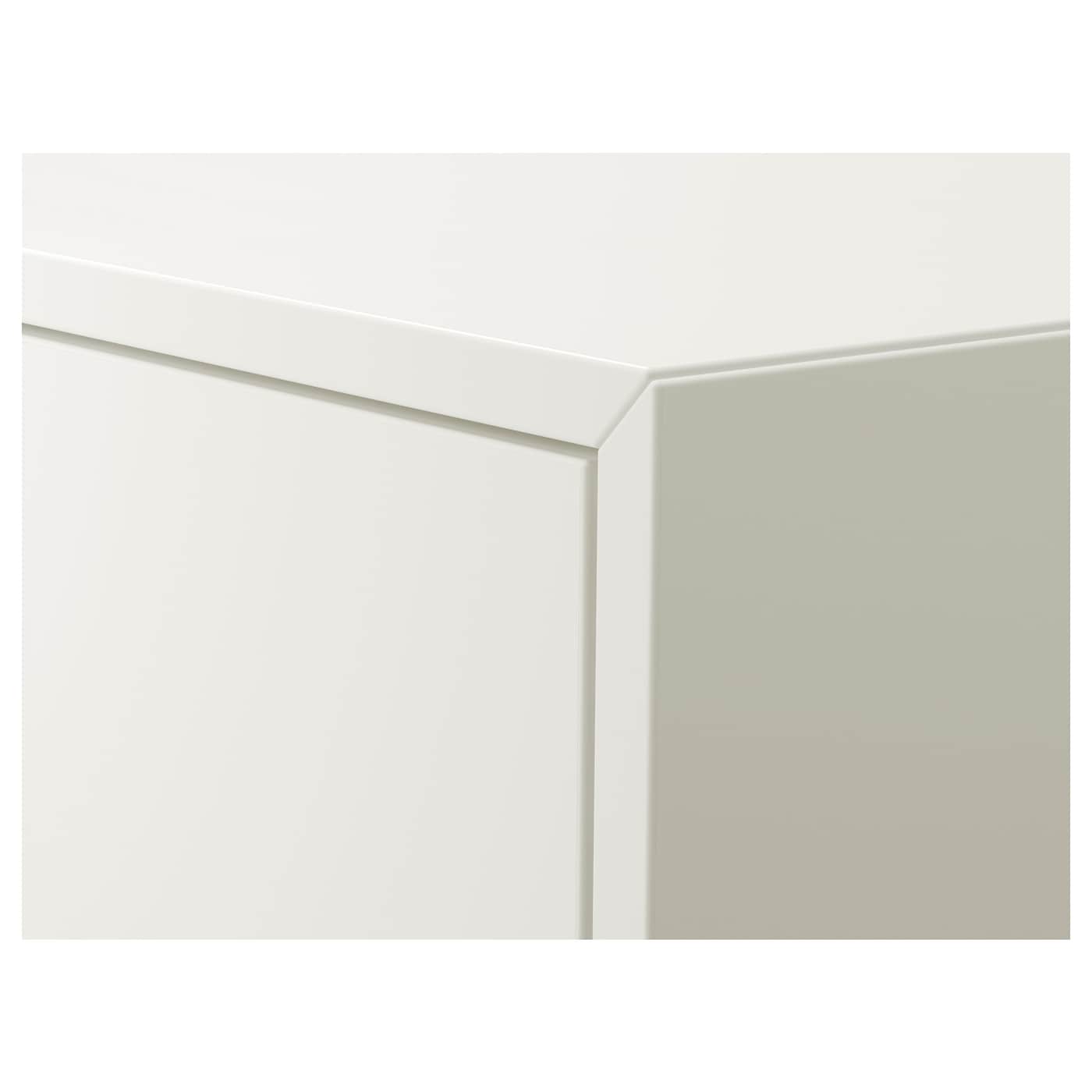 When product developer Petra Kammari Enarsson was a young student and often moved, she used to furnish her apartments with old fishing boxes given to her by her grandfather who lived on the west coast of Sweden. Years later, when Petra was developing the new EKET storage series, those boxes came to mind. How could she make the series as flexible as the boxes?

New technologies, new hobbies, a new family member ... both small and large changes affect life and people's needs at home. Not least when it comes to all the things that we need space for. Petra Kammari Enarsson is a product developer at IKEA and often visits the homes of customers to experience their everyday living and how good storage can make life at home a little easier. She remembers a family in Copenhagen which expanded every other weekend with the daughter from a previous relationship. ”She didn't have her own room, but the family had a solution where she had a loft bed in the living room and her private things were in a chest on the floor”. Petra thinks it's a good example of how more and more people are living in small spaces, and that a large part of everyday living takes places in the living room where we want things to be both practical and stylish.

Another obvious trend around the world is that many people move more often - just as Petra did when she was young. ”The problem is that a lot of storage furniture is so inflexible – upon moving or new needs arising, they can't be adapted. This means storage isn't optimal and it's difficult to keep track of all your things”. These insights inspired Petra and her colleagues to start looking at a more flexible and personal storage solution – something that can easily be updated so that people don't have to buy new furniture as soon as something in life changes. Petra then started to think about those fishing boxes she had when she was young and which were so easy to stack and move as needed. What if you could make a piece of furniture which consists of various smart modules that can be easily moved around, removed and added to?

Petra and her team started by ordering cardboard boxes in various sizes. They took the boxes to different room environments where they moved them around like building blocks – stacking and combining them in various ways. The team also researched detailed facts about storage: on average, how many magazines do we have at home? What’s the ideal height for people to put down their mobile phones? ”Many of us put keys, telephones or bags in a specific place when we come home. We usually do it automatically, without thinking about it”, says Petra. The height that seems to suit most people is 80 cm, so a shelf at that height was a given in the mix of shelves, drawers and cabinets in different colours and styles that eventually became the EKET storage series. ”I'm so pleased that we chose to prioritise playfulness and freedom of choice with all the colours and sizes of EKET”, says Petra, who's looking forward to visiting more homes. ”I think that the customers will find lots of exciting combinations that we haven't even thought of!”.