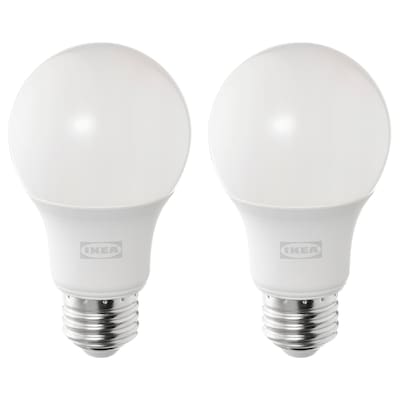 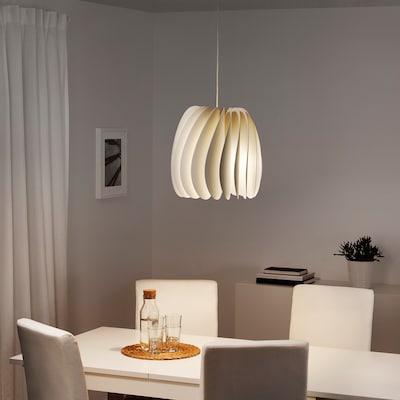 Looking for a downlighter with clean lines that can spread light over a larger area? This large hand-blown globe in white glass with a nickel-plated steel bracket is a perfect choice.

This lampshade in glass is mouth blown by a skilled craftsperson and therefore unique.

This ceiling cup makes mounting the lamp easy, since all you need to do is pull it tightly up against the ceiling to hide the wires.

Diffused light that provides good general light in the room.

Use an opal light bulb if you have an ordinary lamp shade or lamp and want an even, diffused distribution of light.

3.3(16)
Great looking, needs more attentionJcn1Great product but needs attention on the ceiling cover, it slides instead of screw in, not great to weak, and you definately need 2 people to out the globe on, once you pass all this it looks great3
Good price, good looks, functionalMartiniMeGood value. Only complaint is that the top canopy has no set screw and is only held in place with friction. Inevitably the apparatus slides down and reveals a gap between the canopy and the ceiling. Not a big deal, but it needs a little scotch tape intervention to stay in place. Too bad IKEA cheapened our and deleted a simple set screw to hold it I. Place.3
Globe great butDot81Glob great but chrome parts lookcheap. Would like better in brushed. .4
Terrible design of ceiling cup - do not buy!dschwa77As others have written the ceiling cup is supposed to stay flush by friction - in this case gravity wins out and the cup slowly makes it way all the way down the light fixture pole. How IKEA could sell a product like this with this defect is beyond me. Terrible quality control. Very disappointed1
Beautiful and very easy to install!GilbertoMReally enjoyed this pendant. Bought one for my daughter's bedroom and she loved it. Ended on buying another one for another bedroom later on. The quality is good overall and it is pretty easy to get installed.5
Looks great, but has a fatal design flaw.Diane TI love the look of this pendant lamp, however, the metal cap that fits to the ceiling does not stay flush to the ceiling. It slowly travels down the rod. I am not talking about an 1/8 of and inch, it is very noticeable. I think this could have been addressed by a clear plastic ring/washer that folds the cap to the ceiling.1
Utterly terrible & quite dangerousMarktowerBought this lamp with a pair of matching bedside lamps. You don’t receive fixings to attach it to the ceiling. The instructions point to a “hook” to be screwed into the ceiling. The finisher doesn’t stay flush with the ceiling. It’s held by friction. Looks awful, wrecked our ceiling, replaced immediately with a better quality lamp purchased from next. Cheap Chinese manufactured rubbish. The ceiling fittings are not supplied because Ikea probably don’t want to be held responsible if it comes crashing to the ground. Avoid.1
Well ummBingboomLooks great but the cup that conceals the where the wire meets the ceiling doesn’t stay in place. I had to rig it.3
I went back and bought 2 more!decodaddydesignClassic and clean and easy to install to boot. Just wear gloves to keep finger marks off the metal.5
Really love this LookHeidiMac88I bought this a month ago for my office at home. I have several original Round shaped lights in different rooms. I love this look and in order to match them, I found this great light at IKEA. It mounts to the ceiling and supplies great warm light.5
Cup Won’t stay up at the ceilingThoroughly disappointedI’m so disappointed the silver cup won’t stay flush with ceiling. Looks bad and husband is about to take down. You’d think with the multiple complaints with this issue by other reviews that IKEA would fix. I won’t be buying any more lighting from IKEA. GOOD DESIGN BUT BAD EXECUTION MEANS BAD DESIGN.1
Looks great!EmilysfilmsWorks well and looks very sleek, just like I wanted!5
Elegant and simple - but sensitiveguidoWe really liked the lamp (5 stars) but had trouble with the first lamp we bought. There is little to hold the silver shroud at the top of the lamp - except friction, I guess. The electricians we hired to install it were not too careful and it just wouldn't stay up. Because we really liked the design, we tried another lamp and were able to (carefully) install it successfully. Looks great and really puts out a LOT of light.4
Fine, but mount doesn"t stay flush with ceilingJRPDXI had this installed over my kitchen sink by an electrician when I remodeled. The fixture is pretty and the price is very reasonable. The conical part, however, does not stay flush with the ceiling. It's held up by a small rubber o-ring that the electrician said would just wear out over time. There is a gap of about 1/4 inch all the way around. Ultimately, I decided to replace after it was installed less than 3 weeks.2
Almost 5 starsCaliphileGreat price and easy install. The only problem is that the escutcheon does not sit as tight to the ceiling as mechanically connected bases of other fixtures. I'm trying to find a piece of hardware to clamp around the stem to tighten it up. Hope IKEA can fix this moving forward and globe pendant is always useful!4
Good Price, Easy InstallationstevefeyThe title of this review says it all. It looks good, provides light, and it was easy to install. Can't think of much else to be said about it.5
Featured on Instagram
Check it out! Some of our #ikeausa followers tagged #
Skip visual ugc carousel content

Glass is mainly made of sand, soda, and lime melted at a high temperature. Tempering or various additives gives you extra-strong and impact-resistant glass that in some cases can be taken straight from freezer to oven without cracking. A big benefit is how glass can be recycled over and over without the quality deteriorating. Also, a lot less energy is needed to melt recycled glass compared to new raw materials. Our goal is to eventually use only recycled glass in our range.