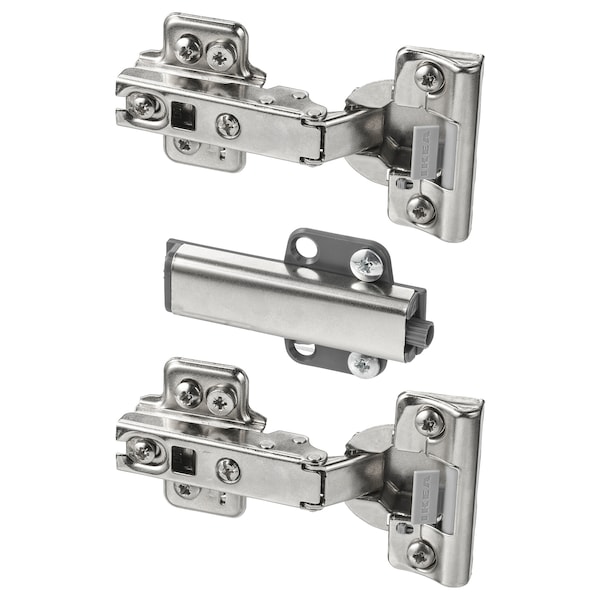 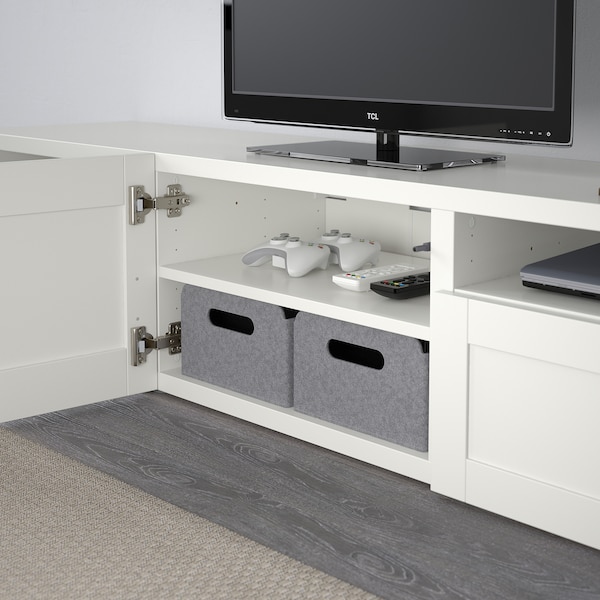 Can a cabinet door make everyday living in a home more comfortable? Yes! Thanks to these hinges, the door closes softly or can be pushed open. You choose, they can do both.

You can choose to use either the soft-closing or push-open function.

With the push-opener you don’t need knobs or handles and can open the door with a light push.

With the soft-closing function your doors close silently and softly.

Knobs and handles are sold separately.

If you choose the soft closing function for your BESTÅ, we recommend complementing the fronts with knobs/handles to make the drawers/cabinets more convenient to open.

3.5(26)
Good hingesVerified BuyerGood quality easy to install and adjust5
GoodVerified BuyerGood5
Good well made n easyVerified BuyerGood well made n easy to put together only thing is delivery is a bit expensive n website not very good5
Good valueVerified BuyerEssential for besta unit5
Expensive addition that should come with the doorsVerified BuyerShould be a part of the door2
Better than I thoughtVerified BuyerReal great item does a I wanted with extra parts in bag5
Expensive for cabinet hingesSpikeywikeyYes they work. Yes they are perfectly sized and convenient to pick up in store BUT for what they are they are expensive compared with ironmongery websites etc2
BESTA SOFT CLOSE HINGESclaire in weymouthThis was a repeat order as were missed by us in purchasing doors. previous items work as required.5
Great hingesSmLenaNever disappointed in IKEA the products di exactly what they are meant to, value for money and easy to install5
Best hingeHavenrocksThese Hinges are excellent. Easy to fit by being a snap on fitting. Strongly built and adjustable. Ikea metal work is generally of a high standard. However it's a one shot system on chip board structures. Once it's screwed in don't move it.....5
Cross and tiredI have just spent 2 hours trying to get the screws in these hinges through the holes. The holes are too small. I managed to assemble the rest of the Besta cupboard with no problems. But now I cannot put the doors on as the hinges are impossible. I drove miles ( an hour and a half) to Ikea to buy this item and now the prospect of trying to take everything apart again and drive the 3 hour return journey to return it , is making me really cross. Ikea why cann't you get the details right ? I see I am not alone in having this problem. Perhaps you could send out one of your assembly people , free of charge to fix the problem . I have another Besta cupboard to assemble but now I will not unpack it and even start.1
Tv unitSw12The hinges where hard to put on . I had to go and buy extra one as the screw had rounded of .2
Looks stuningKatenandStevieI found this more difficult to put together A lot more so than any other piece of furniture from ikea or indeed anywhere else. I did eventually manage after redoing some pieces and it looks amazing and the quality is second to none4
incomplete instructionsToneartThere is no information relating to the brackets in the packet. Plus the screws in the door section of the hinge are too small for the holes pre drilled in my Tyssedal door! If there is a particular hinge that must be used by this door, why dont you state this?1
HingesEmk68Decent hinges they do the job5
Amy999Good product but instructions are unclear on how to install.4
Screws are too tight to get through holesLily100Having built Besta units before, I was not expecting problems this time. However, on starting to tighten the first screw in these hinges, I knew there was a problem. The screw won't turn at all, even before reaching the unit itself. With difficulty, I unscrewed it out of the hinge, then tried again. Still no joy. I tried the other hinges I bought and all are the same. Ikea: you have made the holes too small for the screws to fit through! I am a little bit devastated. I have spent a total of £40 for 4 pairs that cannot be fixed to the units!! And it isn't like there is any other hinge option. So now I guess I have the option of taking them back, and presumably going without doors, as this seems to be a universal problem - or trying to drill the holes out so that the screws will fit through them. Not what I was expecting at this price!!1
Hinges cannot support kallviken doorIkea are a joke 123I have have spent the last couple of hours trying to sort my hinges for my besta tv unit!! I have kallviken door (stone effect) however as the door is so heavy the hinges cannot support and dips down. I have spent ages trying to organise the door and I can get it matched up perfectly when opening and closing the door lying down however when in it’s upright position it just can’t handle it! Spent over £500 and hinges have let it down1
Okay. But doors can only open 1 wayFenton91Annoying you can’t choose which way the door opens. When we got a demo of the cupboard it showed the doors opening different ways which we wanted. For some reason they don’t allow you to switch the hinge round do it can open the other way3
besta hinge messing up my whole besta cabinetsliah12The hinge part that needs screwing onto the besta cabinet frames are an absolute nightmare. we bought 3 sets and for each one it took all the muscle strength we could muster to screw them (we spent almost 1hr on the hinges alone vs the 15mins it took to set everything else up) we gave up on the last one as we were both exhausted- let alone adjusting the door alignment. the screws are just too tight! very frustrating! and poor quality1
Skip listing
Skip listing 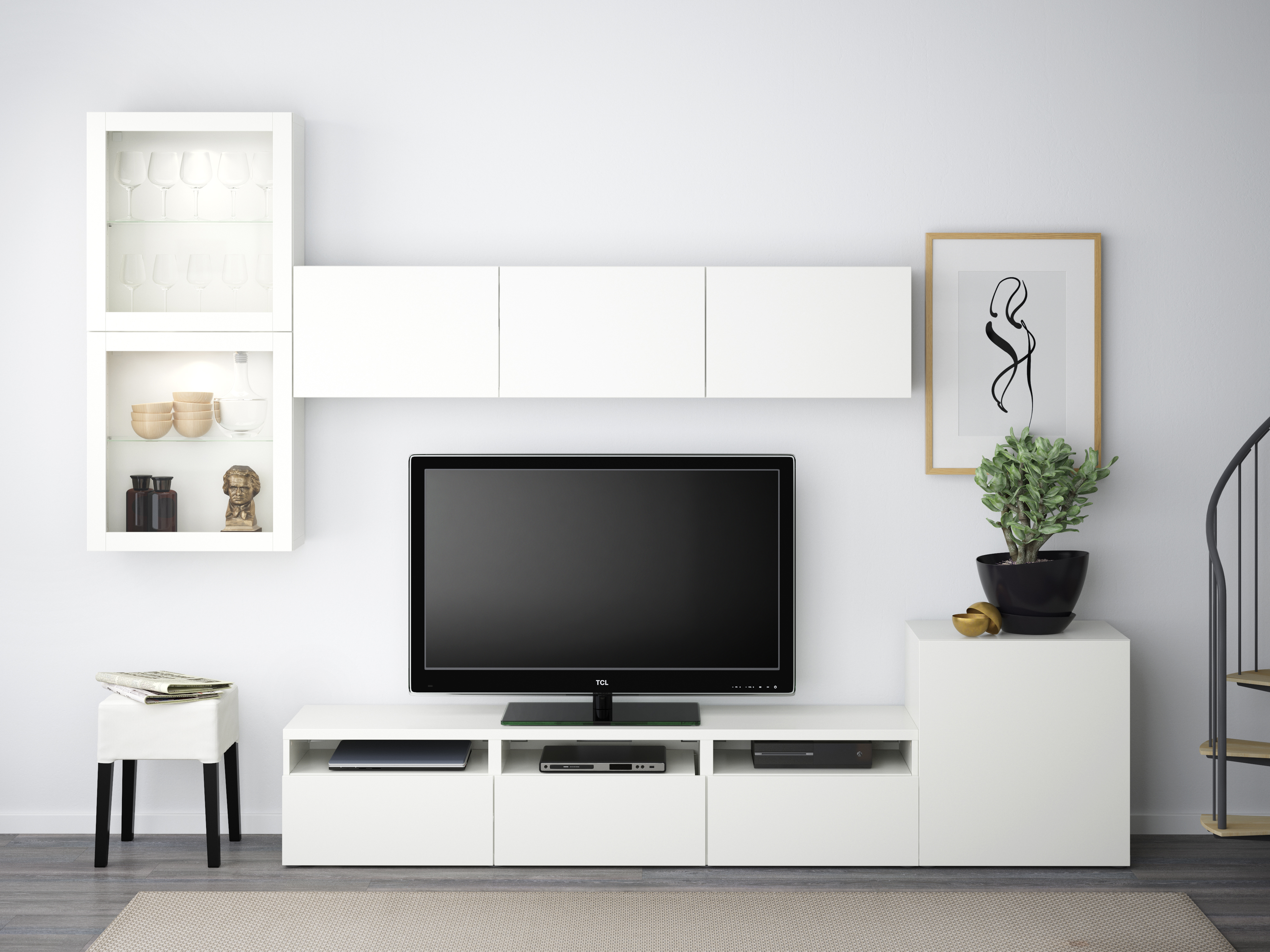