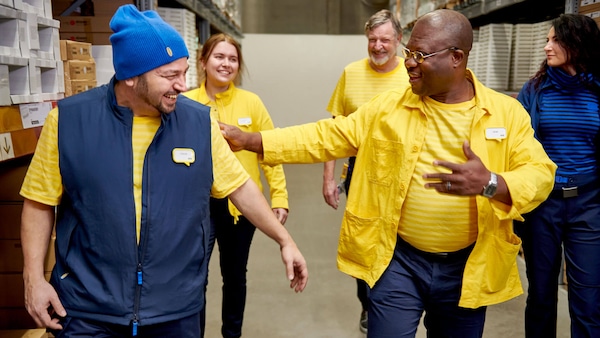 Corporate newsPeople and Culture, Reports and summariesNovember 9, 2021
IKEA U.S. is raising starting wages for U.S. co-workers to $16 per hour, with some hourly wages starting at $17 or $18 depending on location. In addition to the wage increase, the company has enhanced its comprehensive benefits package and more inclusive health care benefits.

A majority of U.S. co-workers to also receive a performance bonus, as a result of transformation progress and strong FY21 sales

Conshohocken, PA – November 9, 2021 – IKEA U.S. today announced that it is raising starting wages for U.S. co-workers to $16 per hour, with some hourly wages starting at $17 or $18 depending on location. The new starting wage is effective beginning January 1, 2022, and will apply to full-time, part-time, temporary, and seasonal co-workers across the U.S., bringing the average hourly wage to $20.

In addition to the wage increase announced today, the company has enhanced its comprehensive benefits package to now include a minimum of five weeks of paid time away from work for all co-workers, education assistance, back-up child and adult care, and more inclusive health care benefits. Following a strong sales performance in FY21, a majority of U.S. co-workers will also receive the “One IKEA Bonus,” a performance-based payout totaling $76 million, in addition to the one-time Ingka global appreciation gift of $17 million to be distributed among all U.S. co-workers, as announced previously.

“Every day I am humbled by our 17,000 co-workers, each of whom makes our success as a company possible and contributes to our commitment to creating better homes, better communities, and a better planet,” said Javier Quiñones, CEO & Chief Sustainability Officer, IKEA U.S. “I am proud of everything we have accomplished over the past year, and we will continue to seek opportunities to grow our compensation and benefits offer and share our success with our co-workers.”

In addition to announcing the increased starting wage and enhanced benefits, IKEA U.S. released its 2021 Annual Summary, highlighting how the company continued its journey to transform the way it does business to become more accessible and sustainable for the many. IKEA U.S. had one of its most successful years to date with nearly $5.89 billion in total sales of goods and services in FY21, a 25% increase from the previous year.

Aligned with a focus on an enhanced omnichannel experience for customers, e-commerce represented 21.8% of sales and the company has a solid plan to continue to grow its business by bringing new IKEA formats to cities. Most recently, the company announced plans for two IKEA Planning Studios in LA.