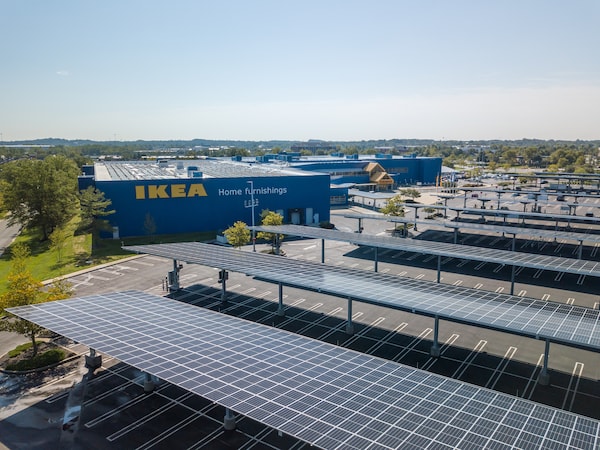 Corporate newsSustainabilityFebruary 24, 2021Last edited: September 29, 2021
IKEA U.S. announced the completion of its first solar car park at IKEA Baltimore and has plans to build an additional seven projects at IKEA stores in Maryland and California.

Conshohocken, PA – [February 25, 2021] – IKEA U.S. today announced the completion of its first solar car park at IKEA Baltimore and has plans to build an additional seven projects at IKEA stores in Maryland and California. Initial results have exceeded expectations as the Baltimore location has seen an 84% decrease in the amount of energy needed to be purchased between September – December 2020, equating to a 57% energy cost savings for the store.

“At IKEA, we aim to have a positive impact on people and planet, which is why sustainability is embedded in every part of our business. We currently have 54 rooftop solar arrays atop 90% of our IKEA U.S. locations and Ingka Group, a strategic partner in the IKEA franchise system, has invested in two solar parks with 403-megawatt capacity in Utah and Texas. This addition of eight solar projects is the latest in a series of investments IKEA has made in renewable energy, and marks a significant step forward in our goals to be climate positive,” says Jennifer Keesson, Country Sustainability Manager, IKEA Retail U.S.

The IKEA solar installation initiative, which is being executed in partnership with Distributed Solar Development (DSD), focuses on adding solar panels to parking canopy and rooftop sites at IKEA stores. The additional seven locations are on track to be completed in 2021, and include IKEA College Park in Maryland, as well as IKEA Burbank, Costa Mesa, East Palo Alto, Emeryville, San Diego and West Sacramento in California.

When completed, the eight solar projects will collectively provide roughly 10.7 GwH of yearly production – the equivalent to taking 1,644 cars off the road in one year and planting over 125,000 new trees. Out of the eight projects, five of them include energy storage systems (ESS) with a collective capacity of about 5 MWhs. This system allows the retail locations to store solar energy for later use, making clean energy available whenever it’s needed.

“IKEA is a clear environmental leader that sets the bar high for other global organizations,” says Erik Schiemann, CEO at DSD. “We’ve helped IKEA maximize its solar energy generation and expand its solar storage capacity, and we’re currently reviewing additional facilities for future solar project locations. With each installation, IKEA moves closer to its ambitious sustainability goals and we’re glad to be a part of that mission.”

IKEA has long been committed to investing in renewable energy to meet its sustainability goal of becoming climate positive by 2030. In the U.S., the company currently owns 104 wind turbines, two geothermal properties, 240,784 solar panels and 143 EV charging stations across 51 properties. In 2020, Ingka Group committed to investing 600M EUR (more than $700 million) into companies, solutions and its own operations to transition to a net-zero carbon economy.