After 70 successful years, IKEA is turning the page on the Catalog 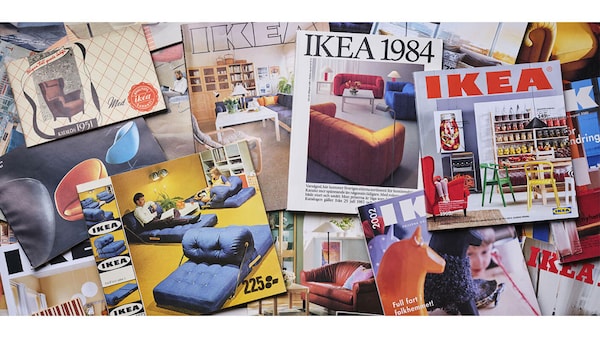 Corporate newsRetail, People and Culture, Life at homeDecember 7, 2020Last edited: September 29, 2021
Inter IKEA Systems B.V., the worldwide IKEA franchisor, has therefore taken the emotional but rational decision to respectfully end the successful career of the IKEA Catalog, both the print and digital versions - and look to the future with excitement.

The IKEA Catalog has a phenomenal 70-year legacy. Over the years it has become an iconic and beloved publication, and it has been an important success factor for IKEA to reach and inspire the many people across the world, with home furnishing solutions and products. But times are changing. IKEA has become more digital and accessible while embracing new ways to connect with more people. Customer behavior and media consumption has changed, and the IKEA Catalog has been less used. Inter IKEA Systems B.V., the worldwide IKEA franchisor, has therefore taken the emotional but rational decision to respectfully end the successful career of the IKEA Catalog, both the print and digital versions - and look to the future with excitement.

“For both customers and co-workers, the IKEA Catalog is a publication that brings a lot of emotions, memories and joy. For 70 years it has been one of our most unique and iconic products, which has inspired billions of people across the world. Turning the page with our beloved catalog is in fact a natural process since media consumption and customer behaviors have changed. In order to reach and interact with the many people, we will keep inspiring with our home furnishing solutions in new ways,” says Konrad Grüss, Managing Director, Inter IKEA Systems B.V. ​

Life at home has never been more important. During the last few years IKEA has tested new formats and ways to distribute the content of the IKEA Catalog. A wealth of knowledge and insights, from both customers and the IKEA retailers, have been collected and it is clear that IKEA can help people to plan their needs and dreams at home, with existing and new exciting tools. While it is time to say goodbye to the catalog, IKEA looks to the future with excitement as this chapter closes, another one begins.

“We are not starting from scratch. We have been transforming many aspects of how to reach and interact with our customers, and the work continues to find new ways to amplify unique IKEA home furnishing knowledge, products and solutions in the best possible way - to inspire the many people through new ways, channels and formats,” says Konrad Grüss.

The decision to say goodbye to the IKEA Catalog goes hand-in-hand with the ongoing transformation of IKEA, being more digital and accessible. A transformation that IKEA is deep into already. Last year IKEA online retail sales increased by 45% worldwide, IKEA.com welcomed more than four billion visits - and at the same time IKEA has improved our digital services and launched new apps for a better IKEA experience – wherever our customers meet us.

IKEA will honor and celebrate the fantastic history of the IKEA Catalog. As a tribute, during the fall of 2021, IKEA will make a book available, filled with great home furnishing inspiration and knowledge. With that said, the beloved IKEA Catalog as we know it today will not continue.

5 facts about the IKEA catalog: