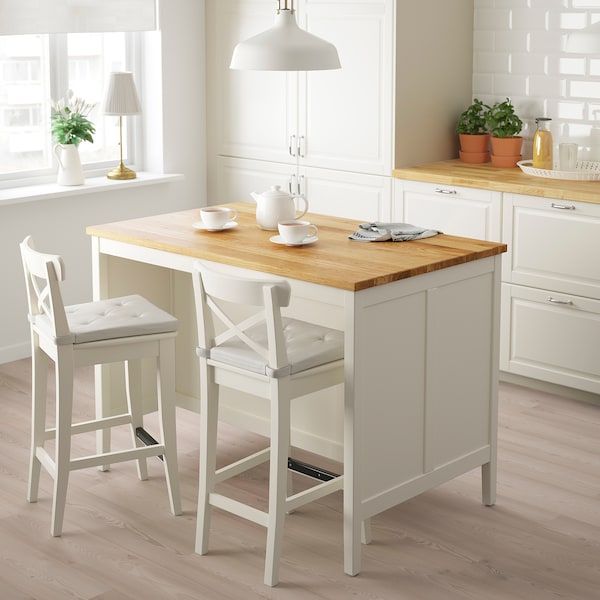 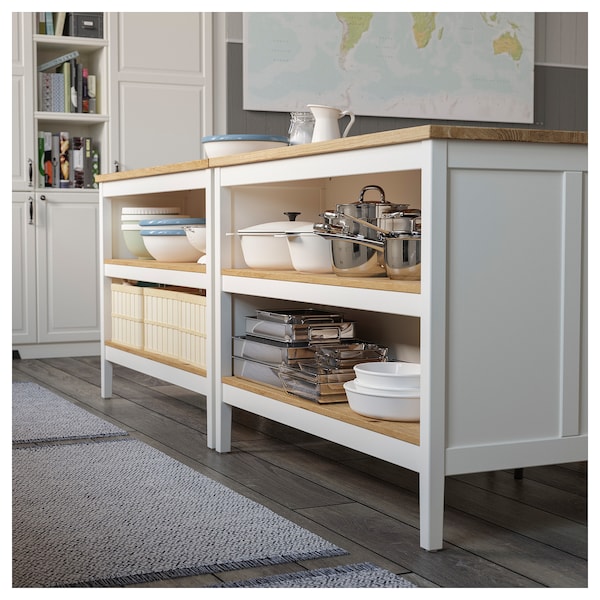 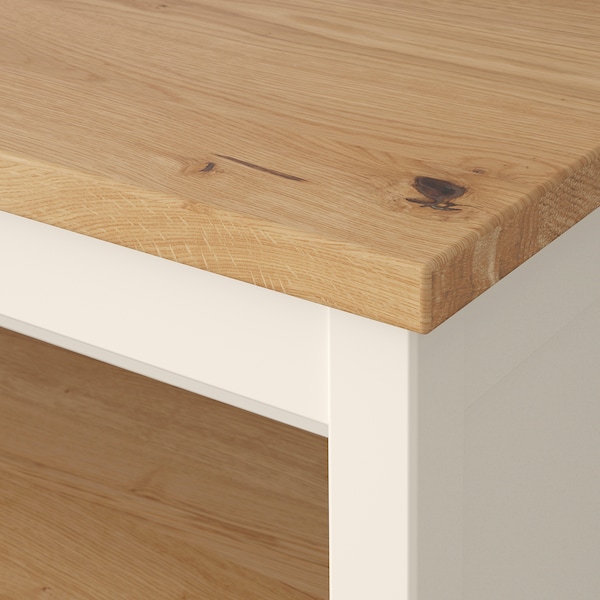 The TORNVIKEN series is ideal when you need more workspace, more storage ‒ more kitchen. Combine a kitchen island with shelves to create a rustic kitchen where you can cook together. Everyone can fit! Read More

Free-standing kitchen island; easy to place where you want it in the kitchen.

Worktop with a thick oak veneer, a hardwearing natural material that can be sanded and surface treated when required.

For quick installation and easy maintenance the worktop is pre-treated with hard wax oil.

The worktop has a full plank design that gives it an authentic plank expression with a genuine wood feeling.

Oak is an exceedingly strong and durable hardwood with a prominent grain. It darkens beautifully with age acquiring a golden-brown undertone.

25 year guarantee. Read about the terms in the guarantee brochure.

Wipe clean with a dry cloth.

Wipe clean with a soft cloth dampened in water and a mild non-abrasive washing-up detergent or soap, if necessary.

To ensure that your worktop ages gracefully, treat it regularly with STOCKARYD wood treatment oil; it gives the surface a beautiful sheen, protects the wood and prolongs the life of the worktop. Better worktops by using wood smartly
Wood is a precious natural resource. Even though it’s a renewable material it needs to be handled responsibly. One way to do it, is to use the wood more efficiently. That’s what we do with our kitchen worktops in thick wood veneer.
“At IKEA we have a tradition of trying to utilise the materials we have in the best possible way,” says Johnny Rietz, who’s been involved in developing the kitchen worktops in thick veneer. The work started in 2008 when IKEA founder, Ingvar Kamprad, visited one of our suppliers and asked a simple question that took some time to answer: ‘How can we make this product using fewer trees?’

“After some trials and errors, we came up with the solution. A core of particleboard and a layer of solid wood on the outside – or thick veneer,” says Johnny. “It’s a combination of traditional craftsmanship and modern manufacturing methods. Paper-thin veneer has been used in fine, decorative furniture making for centuries, but for our worktops we’re using a much thicker layer of wood.” The thick veneer makes the surface hardwearing, and it saves raw material – a lot of it. From the same amount of wood needed to make one solid worktop, it’s possible to produce five thick veneer worktops.

No wood is wasted

Another advantage with this production technique is that you can use the whole tree; the stem as surface, and scrap bits – curvy, bent branches and small twigs – for the particleboard on the inside. The end result is a worktop that is every bit as genuine as solid wood, only more stable and more resistant to humidity. “Sometimes a small, harmless question can make a big difference. That’s exactly what happened with our kitchen worktops. It started as a challenge to use resources wiser, and proved to have positive effects not only for the environment, but also the quality. I think it’s great when that happens!” says Johnny.
More from the TORNVIKEN series
More Kitchen islands & trolleys