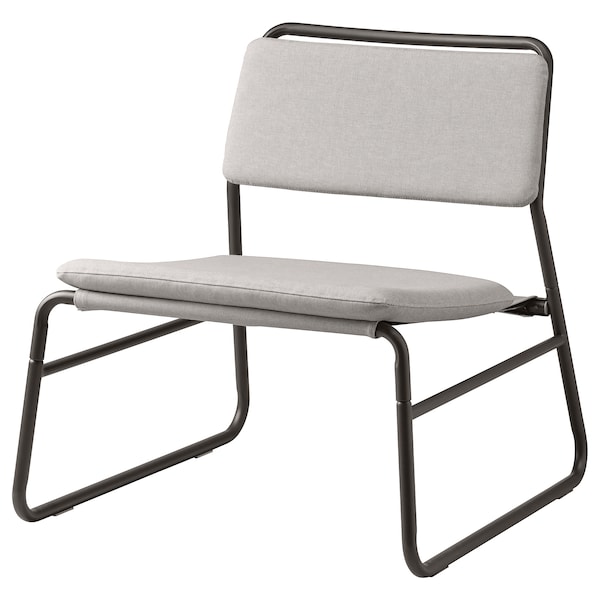 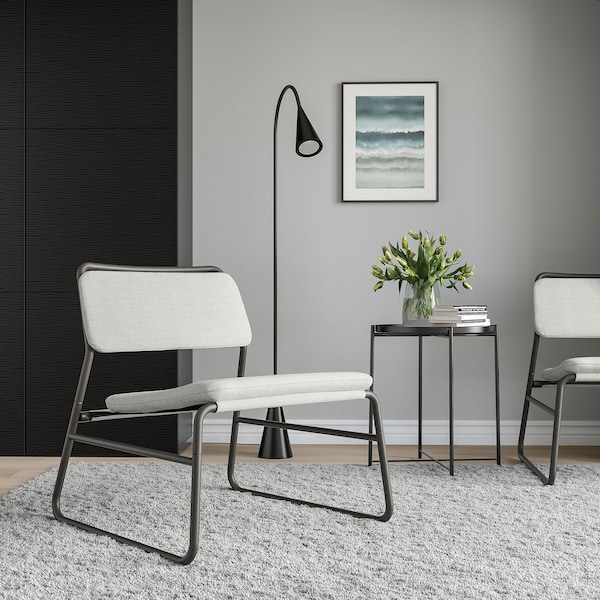 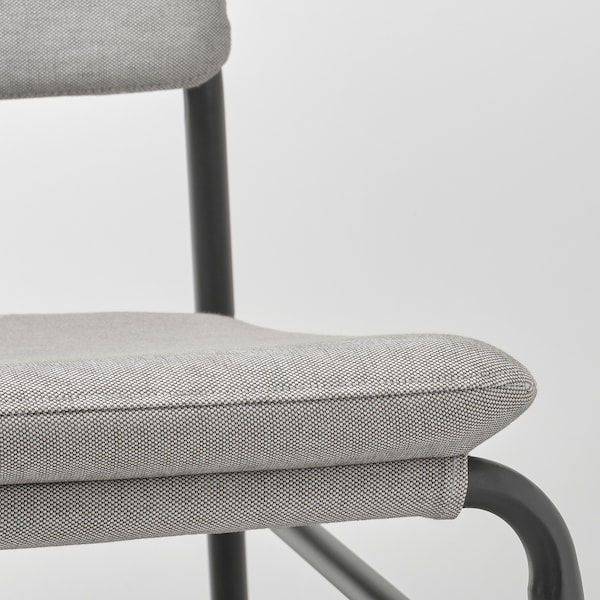 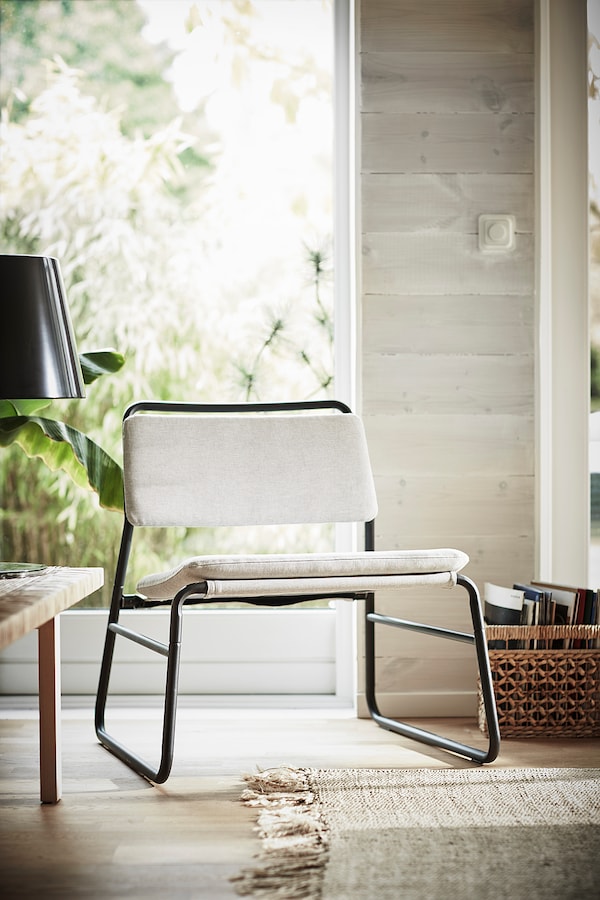 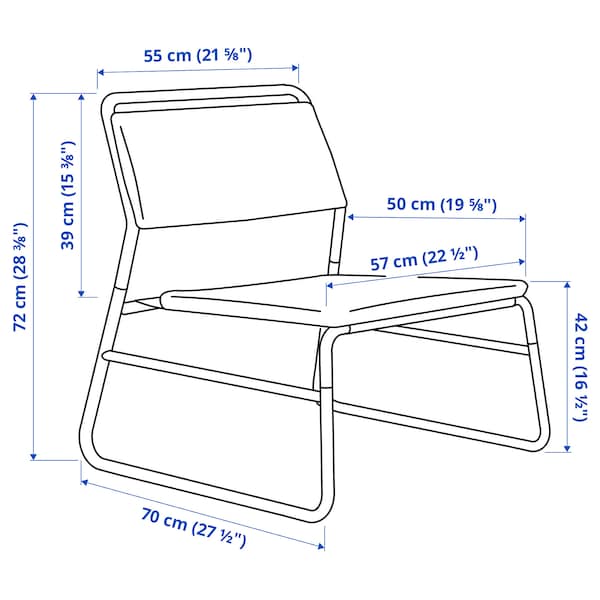 Beautiful simplicity and a casual style. This flexible, versatile easy chair with an airy design adds a visual calmness to the room, while supporting both an active and a relaxed life at home.

LINNEBÄCK easy chair has a light, airy look and a low weight, which makes it simple to move around. Combine with other furniture and use in different situations and places at home.The cover in a muted pastel tone adds a visual calmness to the room and is easy to match with other decor.The powder-coated metal frame and cover are durable and easy to care for, making the easy chair a casual and flexible piece of furniture that you can enjoy for a long time.10 year guarantee. Read about the terms in the guarantee brochure. This cover's ability to resist abrasion has been tested to handle 20,000 cycles. A cover that withstands 15,000 cycles or more is suitable for furniture that should withstand everyday use in the home.The cover has a lightfastness level of 5 (the ability to resist colour fading) on a scale of 1 to 8. According to industry standards, a lightfastness level of 4 or higher is suitable for home use.Designer 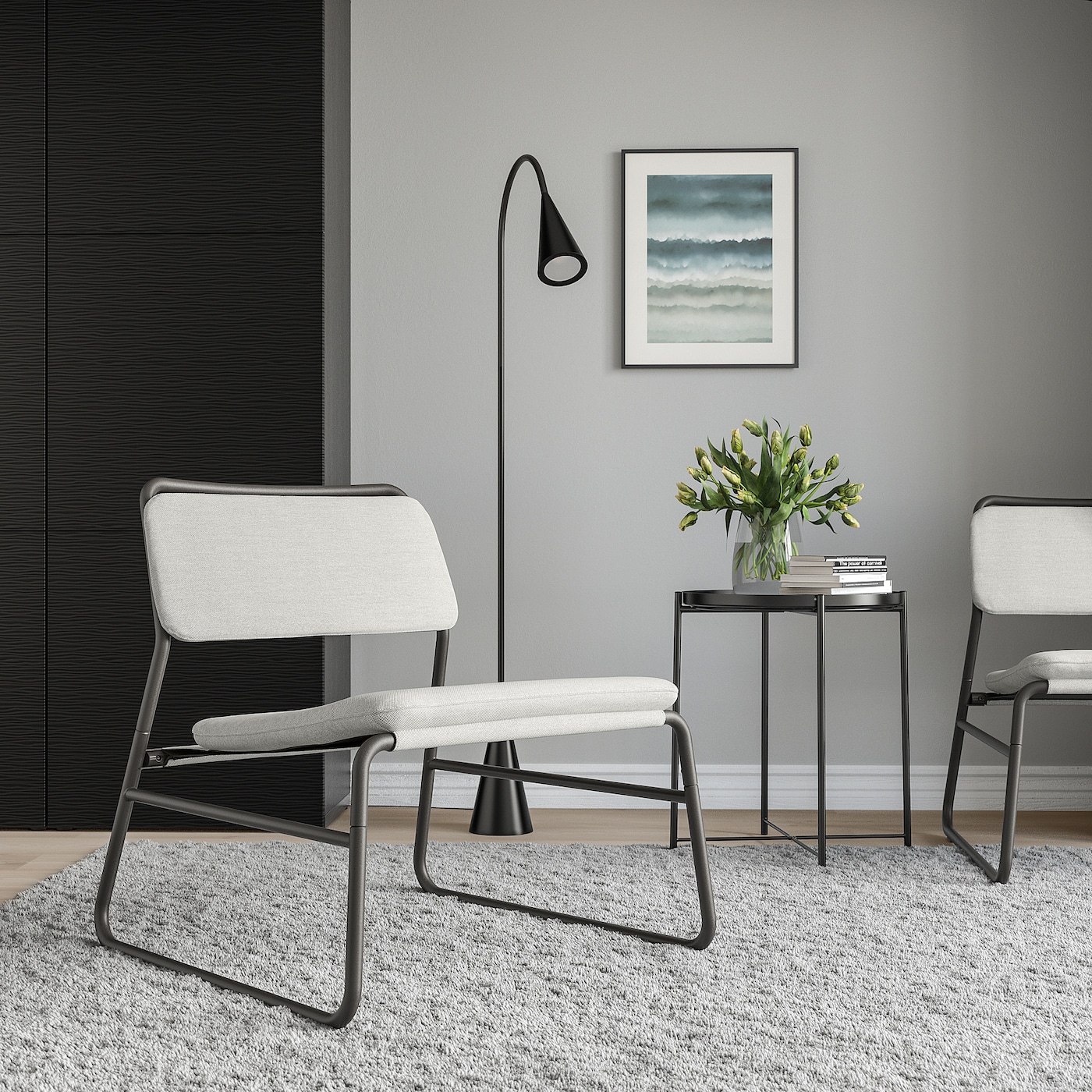 How can we support you if you have a compact home and move a lot? When we developed LINNEBÄCK easy chair, we asked customers on two different continents for advice. It resulted in a unique piece of furniture coloured by hundreds of different everyday lives and stories. “When you create a product, you want it to find a place in people’s hearts. That’s why it’s always best to ask, instead of assuming what customers want,” says Ditte Bruun Pedersen, who was involved in developing LINNEBÄCK.

As one of the first steps, Ditte and her colleagues invited a group of international university students to test mock-ups the development team had created by hacking IKEA products with cardboard, fabric and foam. From the feedback they received, they made new designs that were turned into actual prototypes of LINNEBÄCK. They brought the prototypes to IKEA stores in China and Denmark so that customers could test them. Their reactions surprised Ditte. “The customers were eager to talk to us and not shy at all. One of the things they told us was that they preferred a lower backrest to make the chair more discrete. That’s especially important if you have limited space and want to avoid an over-furnished feeling at home. We also decided to rule out the armrest that we had on one of the prototypes for the same reason.”

One feature that few customers seemed to care about was that the fabric on the back of the chair was as thick and cushy as on the front. “They thought it was unnecessary since they probably would place the chair against a wall and not in the middle of a room,” says Ditte. The lack of attention this detail got actually turned out to be a good thing. “We found another solution for the fabric, and it contributed to the low price. Every time I see LINNEBÄCK, I’m reminded of what we learned when we met the customers. Their suggestions have filled LINNEBÄCK with history before it has even reached people’s homes.”

“How to make a chair as generous and comfortable as possible – with as smart material use as possible? When designing LINNEBÄCK, the limitation became an opportunity. The solution with a visible steel frame and lightly upholstered seat with stretch fabric is inspired by furniture such as sun loungers and camping beds. The shape gives the chair an airy expression and makes it easy to move around. Lightweight, easy to match with other furniture – and surprisingly comfy!”

Polyester is a durable, quick-drying and insulating material that is optimal to use for textiles and as filling in pillows, quilts and furniture. Originally, all the world's polyester was made from oil-based raw materials which are not renewable, but at IKEA we are now gradually switching to only using recycled and traceable polyester from sources like PET bottles. The nice thing is that polyester can be recycled over and over, without changing or losing its great qualities.