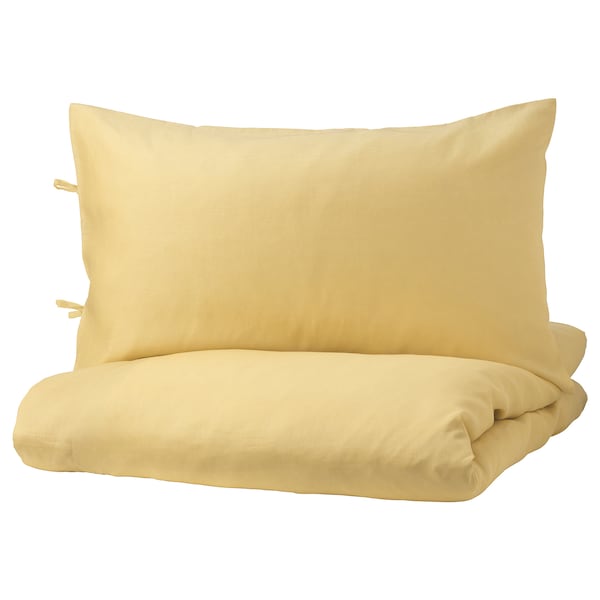 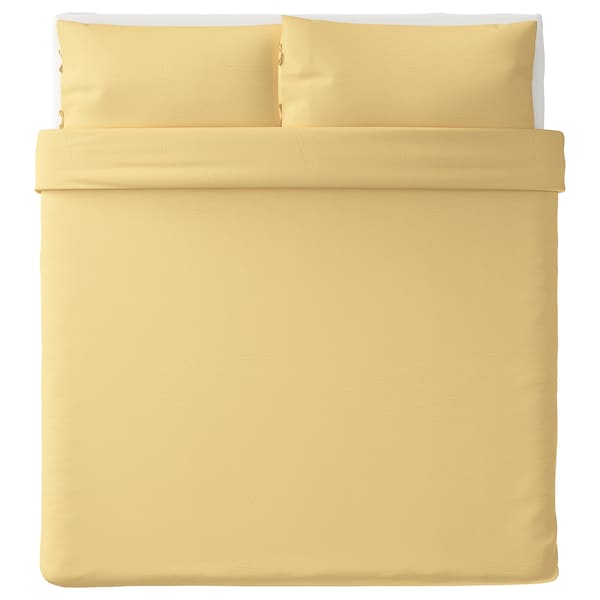 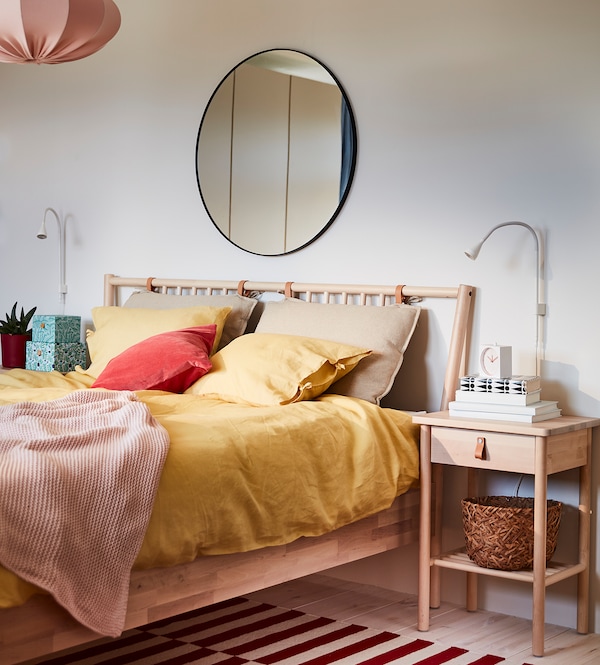 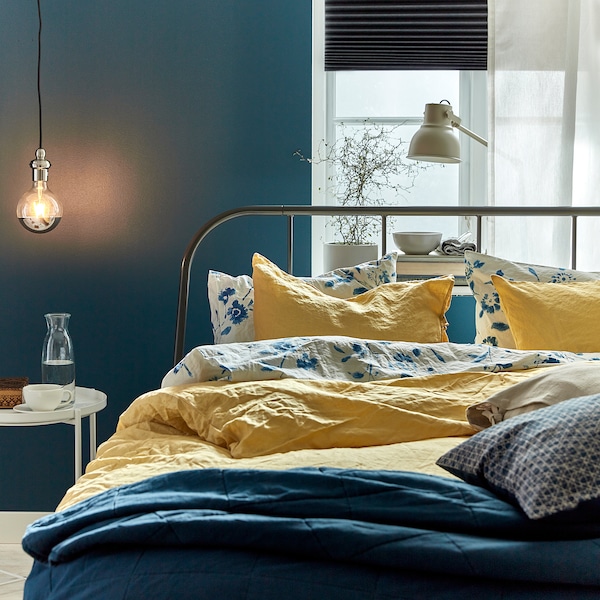 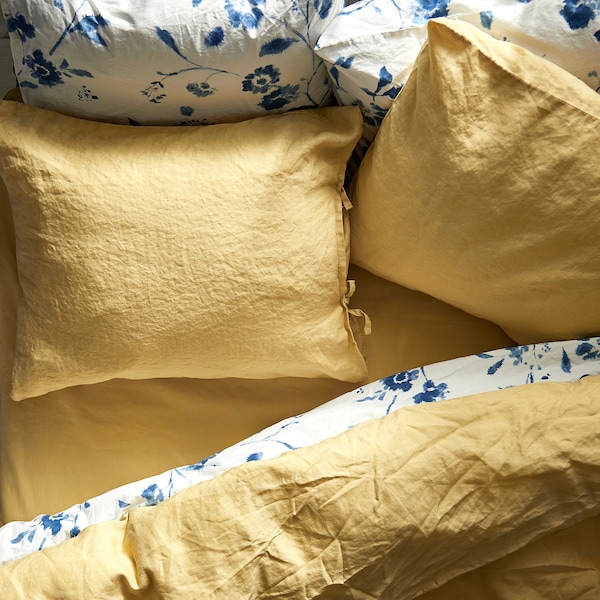 A bed made up with linen will give you many sweet dreams. The material has a beautiful luster, breathes, absorbs moisture and only gets softer. Decorative ribbons keep the duvet and pillow in place.

The natural fibers in linen create subtle variations in the surface which gives your bed linen a distinctive texture and matte luster.Linen helps your body to maintain a comfortable, even temperature all through the night because it breathes and absorbs moisture.Decorative ribbons keep the duvet and pillow in place.104 thread count.Thread count indicates the number of threads per square inch of fabric. The higher the thread count the more densely woven the fabric.Pillowcase with decorative ribbons.Includes: 1 King size duvet cover and 2 King size pillowcases.Designer

3.9(57)
Amazing for the priceJessicaI have wanted linen bedding for awhile but didn’t want to spend so much. These are beautiful and affordable5
It isn’t yellow.SANDYI this product online and liked everything about it, but the color didn’t work for me. It is a lovely shade of gold (very pretty!) but based on the photo I was expecting a brighter yellow.3
A bit expensive and notBrittaA bit expensive and not wrinkle free, but that was expected. Hoping this will last.4
Thumbs up!SusanI’m very glad I purchased this duvet cover. I like the color and I really like that it’s linen.5
True to the picture, coloring,IRISTrue to the picture, coloring, fabric, tie details, excellent finishes, have not washed duvet However, because of the quality believe it will wash well4
Good budget linen optionPaulSolid product for the price. If you're looking for a budget option for linen then this is a good value. Not on par with higher end products like my Brooklinen sheets but that is to be expected with the significantly lower price.3
DissapointedAnonymous reviewerI loved the color and the feel of the material to transition to spring. The same day we purchased the duvet, we washed it so we can change the bedding. It was already coming apart with one wash, and I never had the chance even to enjoy the duvet set. By the time we had the chance to return, it wasn't even worth it.1
It"s okayZ C.The color is great! The problem for me is that it did not have the inner ties to keep the duvet in place so it tends to move around a lot3
Love linenAnonymous reviewerLots of lint after first wash. A bit stiff in the beginning, but gets softer after every wash (which is completely normal for linen bedding). Love the value for the money! Great deal! Kids love it too... no matching sheet set though☹️5
Linen❤️Anonymous reviewerWish there was a matching sheet set/fitted sheet5
❤️linenAnonymous reviewerThe lowest price I found for linen bedding. Wish they would offer a fitted sheet/ sheet set as well...5
Pretty good, and you willWenpeng Z.Pretty good, and you will have a discount if you are a IKEA family member5
Love this!KATHYIKEA's linen PUDERVIVA sheets and duvets are wonderful. Inexplicably, the sheets seem to have been discontinued which is really unfortunate. I had hoped IKEA would offer the sheets in additional colors. Luckily I bought an extra set before they were discontinued.5
DandyFrancisco V.Dandy4
Nice but will need a of washes!StevenThis will not feel great after the first wash, but give it a couple and it softens. Not as fine as other but it is Linen. Feels a bit cooler. Looks good but I'm not a fan of the ties tbh.4
Looks Beautiful!MelissaThe duvet on display in the showroom appeared to have a bit of a sheen to it. However, the one I pulled out of the packaging did not. I had to wash it twice to get it to soften up, otherwise it felt like burlap on the skin. It also had to be ironed. It crumples up like burlap, too. It took some extra effort, but I am finally happy with the outcome. It did soften, and it looks beautiful all put together!! So, ultimately for the price, it is well worth the extra attention.4
Not what I expectedHEICIIt didn’t achieve the look I was hoping. My duvet dances inside this duvet cover. The material is also super wrinkly and not very soft.2
Lovely linen duvet coverPetrineGreat color! Petrol Blue which goes well with grey and other blue tone. Such a good price for linen and the quality is great.5
After the first wash aPETIAAfter the first wash a lot of lint and keeps producing clouds of fibers . Hope it gets better as I love the look and the feel of it.5
It felt like sand paperSUZANNEIt felt like sand paper1
Skip listing

Thousands of years ago, humans discovered how the fiber in the flax plant’s stem can be treated, spun and woven into a durable linen fabric. Even today, flax is appreciated for its many qualities. For example, it has very good absorbency that makes it particularly great for kitchen towels. The flax fiber's smooth surface gives bed linens a comfortable and cooling feel, but flax can also be mixed with cotton to get a slightly softer textile.