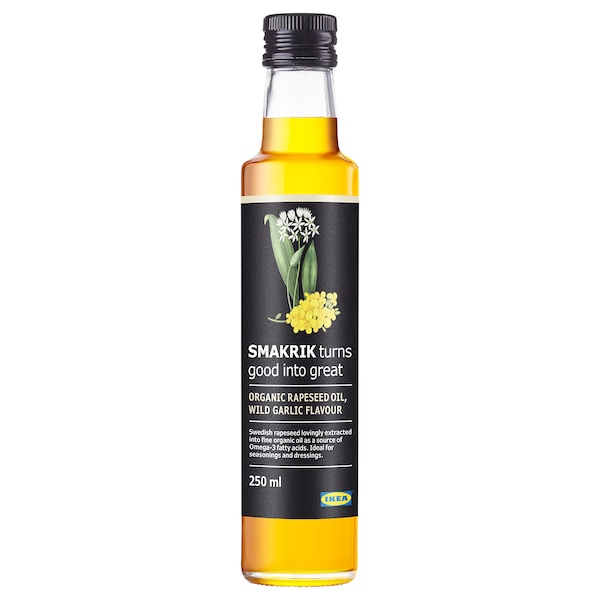 Swedish rapeseed lovingly cold-pressed into fine oil.Wild garlic flavour. Ideal for seasonings and dressings or with pesto, fish or spring vegetables.Cold-pressed: The seeds are pressed mechanically in a slow, gentle process preserving all flavour and nutritional qualities.Cold-pressing produces a golden-coloured oil with a mild nutty flavour, a flowery fragrance, and premium quality in every drop.A source of Omega-3 fatty acids.Organic food production aims at sustaining farming practices that are better for people and planet.A high quality oil when cooking or baking turns good into great.Store at room temperature, out of sunlight.
Article Number404.055.41

Our fans have the best taste! See here #{productName}}. Do you want to show off your interior too? Use #mijnikea and tag us @ikeanederland.

We want to source food from more sustainable sources and make it available at affordable prices. Alongside agriculture that minimizes the use of chemical inputs, organic food production is one of the ways we can achieve this goal. The definitions of organic vary across countries, but the intention is the same – good environmental practices, like preserving soil health, biodiversity, and human and animal health. In the IKEA store, you will find several organic food options.

Your default oil in the kitchen is not made from rapeseed, right? Perhaps it’s time to reconsider. SMAKRIK is a versatile and truly Swedish series of neutral, naturally nutty or gently flavoured rapeseed oils. All with different qualities and characteristics. So whether cooking, baking, or adding a finishing touch to salads, seasonings and dressings, SMAKRIK turns good into great.

Mid-May in southern Sweden. Red barns, blue skies and rolling fields of yellow rapeseed flowers, shining like gold in the countryside landscape. This is the picturesque birthplace of the SMAKRIK rapeseed oils. There are two kinds; a pressed and a cold-pressed. The pressed has a neutral flavour and is perfect for cooking, frying and baking. It also comes as butter-flavoured. The cold-pressed has a nutty character and can take a more prominent role in the kitchen, as a final touch to zest almost any meal. It’s available in dill, thyme, or wild garlic flavour.

David Johansson, chef and one of our food designers, points out health awareness as a reason to why organic oils such as SMAKRIK is becoming increasingly popular. But, to many, this alone isn’t reason enough. It’s also about the taste. “The neutral, pressed oil is really good when making a mayonnaise, and the butter-flavoured one can be used instead of butter when baking. The cold-pressed oil with dill flavour is great to curl over salmon before serving. The thyme and the wild garlic flavours fit perfectly with meat, just before it’s taken off the grill. Or as a last touch on top of the soup”, says David. SMAKRIK rapeseed oils are a great way to bring a touch of Swedish cooking into your home. The possibilities are as endless as the golden rapeseed fields of Sweden.

Quality in every drop

Cold-pressing rapeseed as a way to extract high quality oil is done much the same today as centuries ago. The seeds are dried and cleaned. Then gently pressed in a slow, mechanical process that preserves all flavour and nutritional qualities. Excess seeds and seed coats are removed as the oil is passed through a filter cloth. The result: A pure, golden-coloured oil with a mild nutty flavour, a flowery fragrance and premium quality in every drop.