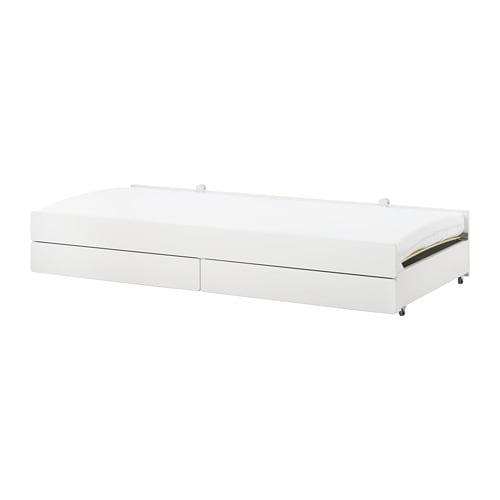 Product availability in stores may be different from online. Please visit the store to check the exact quantity.
-The underbed is perfect to roll out when a friend sleeps over and there’s room for both bedlinens and toys in the 2 drawers.
Additional information
Max. mattress height allowed in the underbed is 10 cm.
LURÖY slatted bed base is included in the price, but is packaged separately.
Sold separately
Mattress and bedlinen are sold separately.<br/>
Care instructions
Product dimensions
Length: 207 cm
Width: 98 cm
Width of drawer (inside): 91 cm
Depth of drawer (inside): 57 cm
Footboard height: 58 cm
Headboard height: 80 cm
Max. load: 100 kg
Mattress length: 200 cm
Mattress width: 90 cm

Slatted bed base:
Layer glued slats: Beech veneer, Birch veneer, Adhesive resin as coating
Ribbon: 100% polyester
Environment
Slatted bed base:
At least 50% (weight) of this product is made from renewable materials.
Renewable material (wood).
Downloads
Only the latest version of the documents is available for download.This means that there maybe a difference in this version and the printed version. 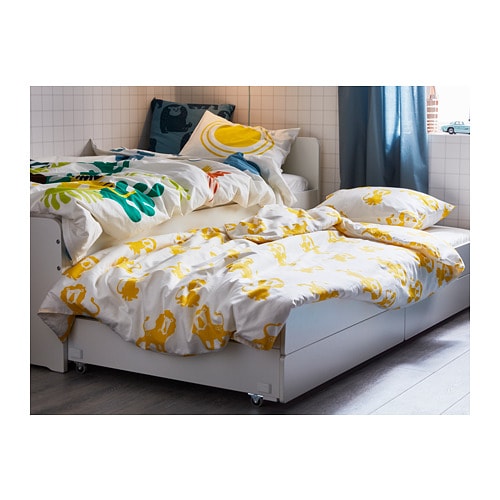 Pre-teen kids are probably the busiest people we know. It might not always look like it on the outside, but on the inside everything runs at hyper speed. With all the energy needed for growing, it makes sense that once they're home, a place to relax and recover is pretty important. That’s where the SLÄKT range comes in. To get it right, we had to go back to the start.
Everything about this product Read less