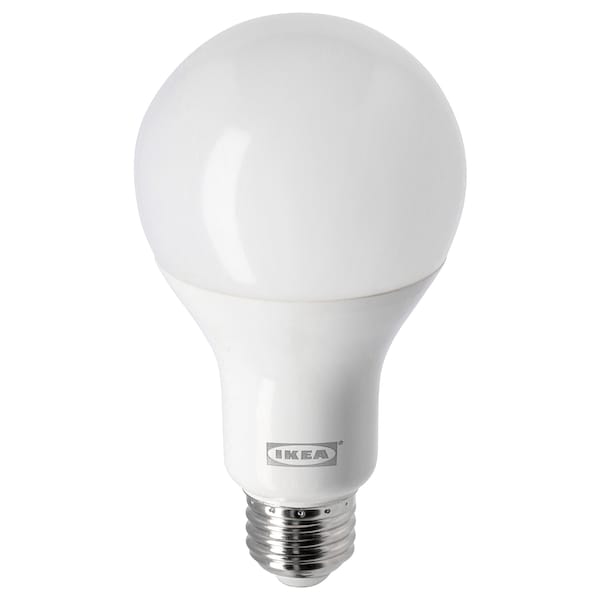 The LED light source consumes up to 85% less energy and lasts 20 times longer than incandescent bulbs.

The LED light source consumes up to 85% less energy and lasts 20 times longer than incandescent bulbs.

As the light can be dimmed, you are able to choose lighting suitable for every occasion.

The more you dim LEDARE bulb, the warmer the light gets, so you can easily create a soft and cozy light.

When the light bulb is dimmed, Kelvin (the color temperature of the light) automatically decreases, which provides a warmer light.

Use an opal light bulb if you have an ordinary lamp shade or lamp and want an even, diffused distribution of light.

Lights up immediately when switched on.

5(14)
They have a long lifeJudyThey have a long life span5
Work as saidTATIANAWork as said5
Brighter than I expectedFrancescaPerfect for my Lauters lamp5
Good cost saving lightGordBought several for our bathroom fixture. They work very well. We did have to return one bulb as it wouldn't light up to full and only stayed a dull amber colour. Great service and not problem returning the bulb.5
Light bulbKATEThese light bulbs fit the socket above my work table and give me the light I require.5
Great valueDeborahGreat value5
Awesome priceGAILAwesome price5
Good bulbBarbraReally good bulb. The light is soft and warm. No heat around. Perfect for a good ambiance and not expensive. I recommend it.☺️5
very goodJACKSONIt fits my purpose - brighter and energy save.5
Very satisfied with the priceELLEENVery satisfied with the price and quality of the light bulb5
GreatLISAThis light bulb gives off the perfect amount of light for a bedroom. We have one plug in hanging light fixture and two lamps. So three of these bulbs is perfect for our large room. Soft white, not harsh or discoloring.5
Simple and easy way toKendraSimple and easy way to spruce up any table in any season5
Skip listing
Skip listing
Story

LEDARE is a series of bulbs made with LED technology and compared to traditional incandescent bulbs they use up to 80% less energy. That makes a pretty big difference on an electric bill. And if you save energy, you save both your own and the earth's resources. We want everyone to be able to do that and high prices shouldn't get in the way! Don't low-energy bulbs do enough? Yes, low-energy bulbs are just as good at saving energy. But LED bulbs don't contain mercury, which is an extra plus for the environment and makes it easier for you to recycle. But right now you don't have to think about recycling. LEDs last for about 20,000 hours, which is the equivalent of 3 hours a day for 20 years!

What is a Kelvin value? Well, when we develop bulbs for home use, there are a few things that are important to think about. All our LED lights have 2700 Kelvin, which is exactly the same as a traditional incandescent bulb. The light is described as warm-white, which is the light most of us find comfortable in our homes. All bulbs at IKEA also have a CRI value over 90. That might not say that much to you, but it has to do with creating a light that represents colors accurately. None of us want to appear as if we have green skin, do we? Which would happen if the CRI value were under 80. That's why our suppliers choose only the diodes that have exactly these values, neither more nor less, when they manufacture light bulbs like LEDARE, or lamps with built-in LEDs.