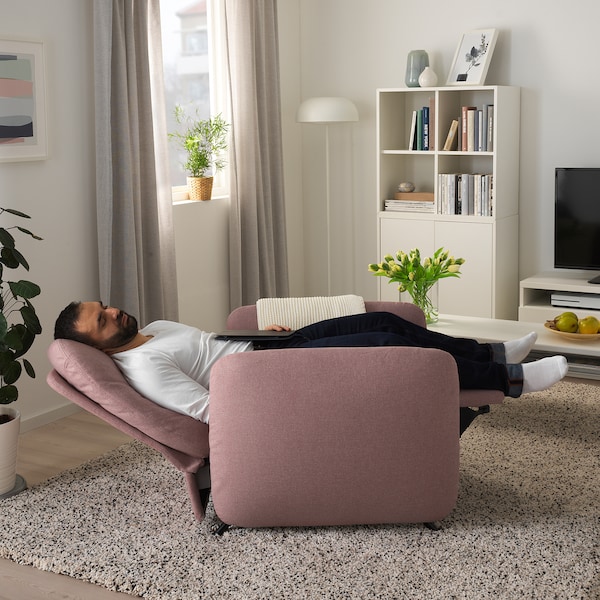 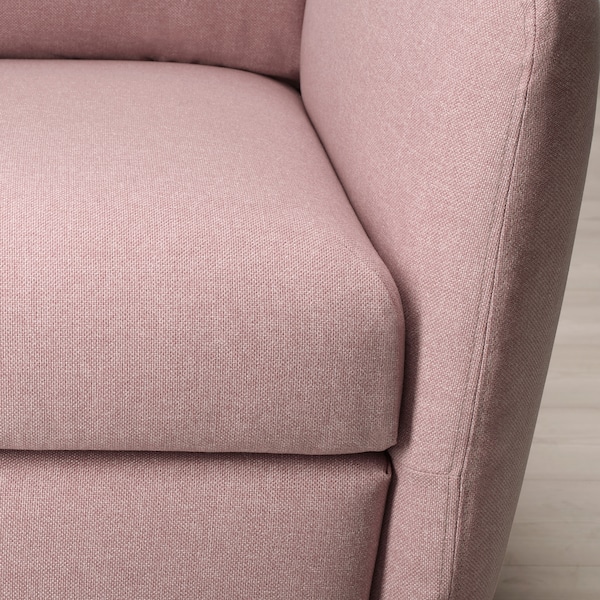 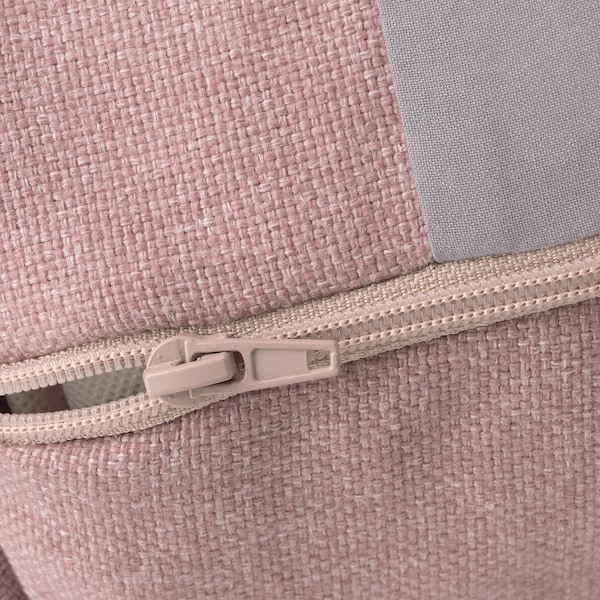 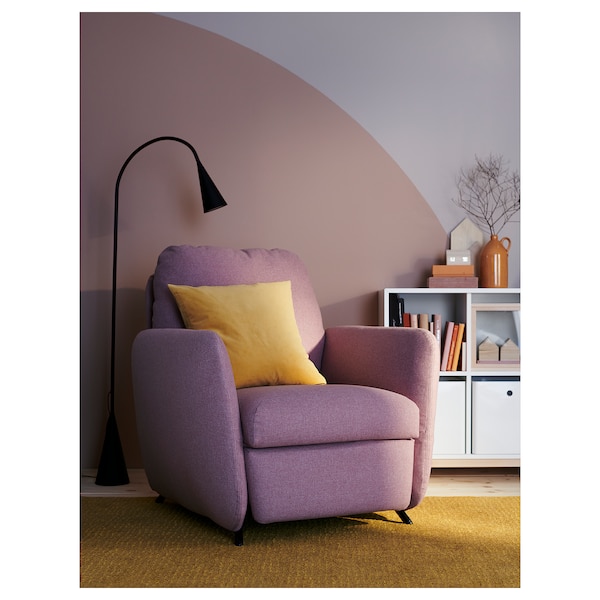 EKOLSUND recliner has soft rounded shapes which are sized to fit in even small spaces. Adjustable in three positions – so choose whether you want to sit upright, lean back or lie back for a nap.

You can set this reclining armchair in 3 positions – upright, lean back and full recline – making it easy to adapt to various activities at home.The cover is easy to keep clean since it is removable and can be machine washed, while the perfect fit makes it look just as neat as a fixed cover.The footrest folds out from the seat without leaving a gap, so you can rest safely without any risk of children’s fingers getting caught in the chair.The back cushion has a chambered construction, designed to adjust to your body and provide maximum support to your lumbar and neck.The seat cushion is filled with polyurethane foam that provides a soft comfort and an embracing feeling.The cushions are wrapped in polyester wadding to keep their comfort and neat shapes when used.Easy to bring home in 3 packages ― and is assembled and disassembled in a few simple steps.10-year limited warranty. Read about the terms in the limited warranty brochure.This cover’s ability to resist abrasion has been tested to handle 50,000 cycles. 15,000 cycles or more is suitable for furniture used every day at home. Over 30,000 cycles means a good ability to resist abrasion.The cover has a lightfastness level of 5-6 (the ability to resist color fading) on a scale of 1 to 8. According to industry standards, a lightfastness level of 4 or higher is suitable for home use.Designer

3.6(7)
Sloppy, lumpy backWendyyvrI just spent and hour trying to get the square cushion for the back into the oblong, curved-at-the-top cover for the back of the chairs. Everything else fits snug and smooth but the back cushion is a mess. The cushion itself is too wide for the cover and trying to get it to conform to the curved top when there is no curve to the shape of the cushion proved impossible. I was sure I had the wrong cover on the cushion and proceeded to put the other pieces together hoping by process of elimination I could figure it out. I had it right the first time. It just doesn’t fit well. The result is a back that is lumpy in some spots with gape in other spots along the seam at the top of the chair. In frustration it’s going back.2
Good reclinerHo ChiIt is very good and comfortable recliner. Only one point that it takes quite some space behind it for reclining.4
So comfy!NathoThis recliner is sooooo comfy! Love the color, the shape, the fact that it's not bulky, it doesn't take tons of room like huge recliners. Its fabrication is very ingenious, and it's very easy to assemble. My reason for not giving it a fifth star: it felt as if my skin was attacked by intense itchiness every time I sat on it. I don't react that way on my other couches. So I researched, looked for bed bugs (found none - you never know with warehouse storage); read stuff on dust mites, they're hard to see, so I decided to steamclean it with cushions on, didn't help. So many days later, I removed all the cushions, washed them in laundry machine, air dried them, vacuum the chair itself (without the covers), then put them back on. I think it helped. I also used someone else's suggestion to place a flat sheet on it to create a barrier between it and me. I think it also helps, my skin feels less itchiness, but still some. Maybe it was just the chemical treatment of the cover fabric that caused my skin to react, who knows. Other than this reaction, it's an awesome recliner!4
Probably the best matches with the prizeAnn2019I bought this staff couple weeks ago and happy with it especially if considering the prize and quality , but it doesn’t fit my quest room so I must return it and changes with the other one . But I am still thinking taking back of it4
So far so goodLarry from MontrealSeems very nice. I'm giving 4 stars because of two reasons: 1 - it is a bit expensive for what it is....I was hoping the armrests would be a bit sturdier for that price. 2 - a bit tougher to assemble than I thought. Certainly not impossible, but you have to read carefully to know which way to put the legs, screws, cushions. The fabric is not terrible to pull over, if you do it properly. You have to read the instructions carefully to know which way to put the cushion in. Also, the instructions say to wait 72 hours (what????) once you puncture the plastic seal and allow the cushion to expand. I waited overnight and then assembled, it was fine. Positives: The recliner looks great, is very comfortable, and relatively modern (not old-man looking). It is also not bulky, nor does it take up half the living room . Quite a small footprint for a recliner. Most other recliners on the market are these huge lazy boys which are very seventies looking.4
Looks great but difficult to assembleArianna2705The chair looks good and is very comfortable but the covers where next to impossible to put on. they barely fit and where too small for the chair.3
Skip listing

Take a seat in one of our recliners and get a pleasant surprise. They're adjustable to three positions and come with a built-in footrest. While sitting, just use your back to press against the backrest - it lowers and the footrest raises. Now relax and enjoy!

Available to order online. Due to the impact of COVID-19, we are currently experiencing some supply delays, which may impact product availability in-store and online.
Checking stock
You have 365 days to change your mind.
Skip listing
Skip listing