Cool, crisp duvet cover in a soft cotton weave with a high thread count. The sides have different patterns in soft color tones - chambray or stripes. Hidden zipper keeps the duvet in place.

Chambray is woven from white and colored threads which give the fabric a lively look and soft color tones.

Feels crisp and cool against your skin as it’s made of cotton percale, densely woven from fine yarn.

Feels soft against your skin and retains its vivid colors for a long time since the yarn is dyed before weaving.

The zipper keeps the duvet in place.

You can easily vary the look in your bedroom with this duvet cover, because the sides have different patterns.

;
Good valueErikoI've never been impressed with IKEA bedding until I bought this one. Good quality chambray cotton, beautiful color. It washes well and is roomy enough for the SMASPORRE extra warm duvet. I found this in the As Is section (50% off) so it's an even better deal.5
Great Value on a Queen Duvet CoverLESTERLuxurious look and feel without the department store price. Zippered closure is much better than the buttons you find on similar duvet covers that always come undone. Thanks Ikea!5
Coastal LookB.If you are looking for that coastal look that is trending look no further! Blavinda Duvet has you covered.5
Duvet CoverCarolynGreat quality duvet cover! I have bought 3 so far for my house. 100% cotton is very difficult to find so Ikea has provided me with one!5
Washes up nice and softDEBBIEWashes up nice and soft5
RecommendANNARecommend5
Nice colorInsunWhen I see this one , it’s nice light denim color I like very much and cute and simple design!!!5
I love itSusanI love it5
Great qualityKarenGreat quality5
Nice duvet setAthenaI bought this because the fabric is quite nice to the touch with the higher thread count (very soft and smooth). The colour is closer to a light denim blue, not a baby blue as it looks online. The zipper is a nice touch and much better than the buttons or snaps we have on other Ikea duvet covers. Having stripes on one side and the solid blue colour on the other is a nice option. (The pillow cases are like this as well.) It's a little pricey but we wanted to get something a little nicer than our other Ikea duvet covers.5
Exactly as expected.MARY J.Exactly as expected.5
Beautiful. Exactly what I hopedChrisBeautiful. Exactly what I hoped it would look and feel like5
Dynamic Duvet CoverKirkThe fabric on this is great for a duvet cover. One side is like a gray chambray and the other is a gray/white pinstripe. It doesn’t overly wrinkle which is nice when you make the bed every morning.5
Great Duvet coverDanWe have this one for a couple years now, the style and comfort is great. My partner asked if it was still being produced and if so to buy two more so that we have it for a while. So now we have three of them.5
2 Sides DifferentSusanLove the option of changing the sides!5
Great productDORINEGreat product5
Colour not as shownCarolynThe duvet covet itself is fine. Nothing luxurious but simple and nice. Classic stripe and chambers. My disappointment.however was that the photo makes it appear a cheerful shade of baby blue, when in reality it's duller and a bit darker too. It really looks like a chambray Jean shirt in real life while in photos it doesn't quite. If you are aware of this and what that look, then it's fine. Just wasn't what I hoped for personally. Also, one minor thing is that I wish it had button closures instead of a zipper.because I feel over time and washes a zipper is more apt to break and can't easily be fixed like a button can be.3
Good productANAGood product5
Love the colour….the zipper makesSANDRALove the colour….the zipper makes it so easy to put on my duvet …5
BlavindaJeffreyLooks great on the bed!5 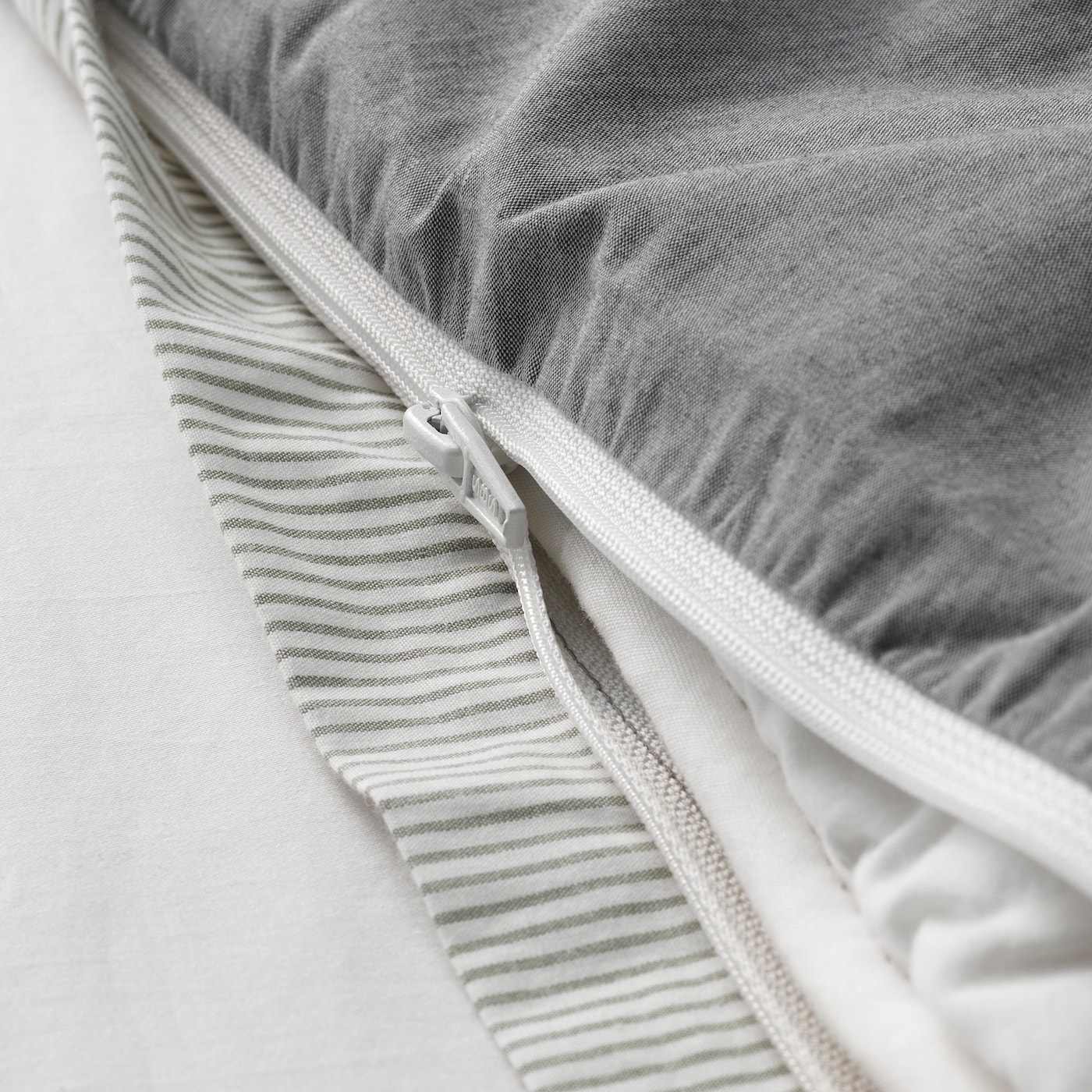 Our take on cotton

We use cotton in many of our products, from sofas and cushions to bed linen and mattresses. It is a soft, durable and renewable fibre that breathes and is good at absorbing moisture. All these great qualities make cotton one of our most important materials, but it isn’t without its challenges, much having to do with conventional farming methods that negatively impact the environment and poor working conditions for farmers. With our size and production volumes, we want to drive change in the cotton industry.

Working together to drive change

Each year, IKEA uses around 0.5 percent of all cotton grown around the world. This may not seem like a lot, but the number is big enough to drive change in the industry. For many years, we have been working with partners and stakeholders globally to transform conventional large-scale cotton farming and set social and environmental standards for cotton production. As an example, we helped set up the Better Cotton Initiative (BCI) who runs the world’s largest cotton sustainability programme. BCI exists to make global cotton production better for the people who produce it, better for the environment it grows in and better for the sector’s future. Today, more than 110,000 farmers have adopted more sustainable farming practices within IKEA projects.

Ensuring compliance throughout the value chain

All IKEA products are produced in accordance with the IKEA IWAY Standard, our Supplier Code of Conduct. It sets out the minimum environmental and social standards expected from our suppliers, including compliance with local laws. We do not accept any form of forced labour, child labour or treatments in breach of our supply chain requirements. Our cotton teams across the globe ensure that all cotton used in IKEA products meets the demands of compliance in our supply chain. By having teams on the ground in areas where it has previously been challenging to work responsibly, we can challenge the traditional ways of working and improve the industry. If we discover that we are acting in places where we cannot ensure our requirements are being met, we follow-up on the ground and drive change.